In 2007 I spent a long time in the hospital, and during much of it I could not speak because of what is elegantly called intubation—a 19-century word for sticking a tube down your throat. Not being able to talk put me at a rhetorical disadvantage. 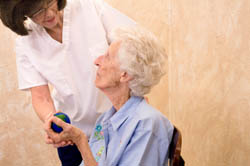 Crowds of doctors visited every day, and most of the talking was done by the attending who called me Mr. Bailey. When it got so I could talk too, I called the attending Doctor. This lent an attractive symmetry to our conversations.

A gaggle of other doctors—fellows and residents—accompanied, and their way of dealing with me was to use no term of address at all. They didn’t consider many other of my possible honorifics—like, say, Professor.

There are a good many choices. One of my former students calls me sensei, a word borrowed from Japanese and used especially to address teachers—not to mention most female members of the Imperial family. (Here’s a place to learn about honorific terms in Japanese.)

Still, Mr. Bailey was OK with me.

Lots of other people crowded into the room to administer medications, take vitals, draw blood, and all sorts of other housekeeping. Their terms of address were rather different, especially when I was mute. Women liked to slip into honey and sweetie. Men went in for big guy, fella, buddy, pal, and sport. I think one called me bucky. This was less OK.

Turns out there’s a name for this condescending stuff: elderspeak.

Most of the words formed with –speak are about how people talk: Jackspeak “how people use English in the British navy;” girlspeak “how young women communicate with each other,” geekspeak “how computer zealots exchange ideas.” As you can see by clicking on the links, you can get a dictionary explaining them all.

Elderspeak is different from these, though, since it describes not how old people (or seniors) talk but how people talk to them. Or perhaps more accurate to say, talk down to them.

Research into elderspeak has produced some remarkable results through clinical studies: “When younger adults talk with elders, they simplify speech and alter emotional tone … The implicit message of incompetence then begins a negative downward spiral for older persons, who react with decreased self-esteem, depression, withdrawal, and the assumption of negative behaviors.” Elderspeak can even reduce your life expectancy. Forthcoming research from Becca Levy (of the Yale School of Public Health) says the “downward spiral” begun by elderspeak may take 7.5 years off your life expectancy.

Of course the people calling me fella or sweetie didn’t intend to knock years off my life: they wanted to be informal, friendly, sympathetic. Mostly they managed to avoid the hospital we: “How are we this morning?” Or tag-questions: “That hurts, doesn’t it?” They were after rapport but they seldom got past patronizing.

Like most Americans, the hospital staff were suspicious of titles and wary of formality. A democracy should have no need of such things. After all, the U.S. Constitution forbids them: “No Title of Nobility shall be granted by the United States: And no Person holding any Office of Profit or Trust under them, shall, without the Consent of the Congress, accept of any present, Emolument, Office, or Title, of any kind whatever, from any King, Prince, or foreign State.”

These matters are not simple.

So much of our self is concocted from language. Demeaning terms make people feel demeaned and may shorten lives.