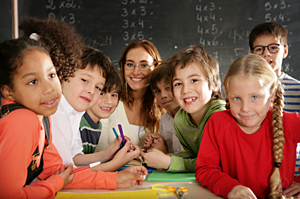 Environmental conditions are much more powerful than genetic influences in determining intelligence, according to University of Michigan social psychologist Richard Nisbett.Nisbett says that recent research in psychology, genetics and neuroscience, and new studies on the effectiveness of educational interventions, have shown that intelligence is strongly affected by environmental factors that have nothing to do with genes.He analyzed a large number of such studies, showing how environment influences not just IQ as measured by standardized tests but also actual achievement.”Believing that intelligence is under your control—and having parents who demand achievement—can do wonders,” Nisbett wrote in his book, “Intelligence and How to Get It: Why Schools and Cultures Count,” to be published Feb. 2 by W.W. Norton & Co. Inc.For example, the high academic and occupational attainment of Asians and Jews is not due to higher IQs, but to family values that emphasize accomplishment and intellectual attainment, and to cultures that emphasize hard work and persistence.Likewise, genes play no role in race differences in IQ between blacks and caucasians, Nisbett says. Class and race differences starting in early infancy combine with neighborhood, cultural and educational differences that widen this gap.”We need intensive early childhood education for the poor, and home visits to teach parents how to encourage intellectual development,” Nisbett wrote. “Such efforts can produce huge immediate gains in IQ and enormous long-term gains in academic achievement and occupational attainment.”Highly ambitious elementary, junior high and high school programs can also produce massive gains in academic achievement. And a variety of simple, cost-free interventions, including, most notably, simply convincing students that their intelligence is under their control to a substantial extent, can make a big difference to academic achievement.”The United States has fallen behind most of the developed world in its level of educational achievement, Nisbett points out, attributing this deficit to the large and widening gaps between socioeconomic classes in this country.Being poor, he says, is linked with many environmental factors of a biological and social nature that lower IQ and academic achievement. These factors include poor nutrition, inferior medical care, a low rate of breast-feeding and parenting styles that are much less warm and supportive than those of higher socioeconomic status parents. Not only are many U.S. blacks afflicted with these problems, they also struggle with stereotypes and prejudice that intensify decreases in performance.Nisbett singles out several educational intervention programs that have been shown to be effective in closing the racial and socioeconomic gap in school achievement. He also debunks the claims of success in other programs and techniques, including the No Child Left Behind Act.