English expands or contracts to fill the space allowed for it. Along Venice Beach in California, you can buy a grain of rice with your name written on it. If you’d like to see a word much bigger, you can have a look at the nearby sign that makes the word Hollywood visible from afar. 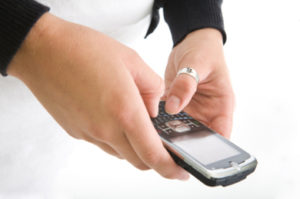 Usually we like our language to be a normal size. Garrison Keillor foresees difficulties in the unification of two American Protestant denominations, the Lutherans and the Episcopalians. Imagine the startled Lutherans when the Episcopalians come calling: “And suddenly the Bible-based sermon of 25 minutes turns into a six-minute homily about the beauty of flowers.”

As Aristotle said of tragedy, we expect things to take on a certain magnitude. When they are too big, we take pictures of them for a souvenir. When they are too small, we lose track of them. Lincoln’s “Gettysburg Address” nearly got lost because it was over almost as soon as it was begun. (Lincoln had told a reporter a few days earlier that it was “short, short, short.”)

Part of the wonder of words is that we can expand or contract them to suit our purposes.

Back in the days when the telegraph company charged by the word, you could condense your message and save money. In 1883, a Chicago bank published a telegraphic code book in which a single word could stand for a whole phrase: GENTEEL was short for the already cryptic, “the bill on for is refused acceptance unless documents are delivered.” Lots of money was saved there.

Now comes text messaging. The short message service available on many cellphones gives composers 160 spaces in which people thumb things they want to write but don’t want to say. Nowadays, there’s a reincarnation of the telegraphic code book to help authors condense—for instance l8r (“later”), LOL (“laughing out loud” or “lots of love”). A growing number of mobile phone users indulge in text messaging, and many, especially the young, are very frequent users. Estimates of the volume of text messages are approximate but begin in the hundreds of millions per year.

The former mayor of Detroit languished in jail for having texted amorous billets doux to an assistant and then lying about them. The old media, the newspapers, quoted the new media so the mayor’s love notes were there for all to read, along with abundant evidence that he had lied under oath.

There’s even a dictionary and glossary: transl8it! dxNRE & glosRE. An easier solution to understanding the messages is a website that translates text lingo automatically. Try translating this, for instance: mtU @ d fishbowl.

Purists have cried out in alarm. Teens who TM won’t know how to spell. Civility is in peril. (Someone told me recently that he texted his sister so as not to bother with greetings and idle chat that would waste time on the telephone.) Political campaigns use TM to seem hip and intimate. (Barack Obama announced that he would post his choice for Vice-President first through txt to supporters.)

Now there is even a genre of fiction designed to be composed and consumed on the cell phone. Browse some of these stories at Text-novel or write one yourself.