The winter of 2009 has been severe. My four-year old son alleges that he can’t remember summer and has been begging me to make the snow disappear. Unlike past years in Michigan, when a spell of above-freezing temperatures was not uncommon, this year the cold and snow have been unrelenting. Weather records support this claim. According to analyses by the Goddard Institute for Space Studies, January 2009 is the ninth coldest on record in Michigan. This winter is also on track to become the second or third snowiest on record. 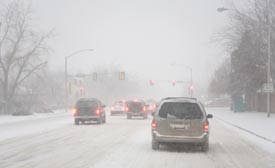 The bitter cold that many places have experienced this year is due to La Nina.

It isn’t just Michigan. A particularly harsh winter in China, late-season storms on the US East Coast, and snowfall in Baghdad marked 2008-09 as surprisingly bitter.Some people have suggested that the cold exposes global warming as a myth. Climate-change skeptics and bloggers have correctly observed that after several years of record-setting global temperatures (2007 tied 1998 as the warmest on record), 2008 was a climatic letdown. Global average surface temperature fell 0.32°F, inspiring claims of global cooling and insults against Al Gore. Just as an American administration is finally preparing to take serious action on climate change, the problem seems to be disappearing.Or is it? Instrumental records demonstrate that climate is like an unleashed dog on a walk; it runs here and there, crisscrossing—but ultimately following—a path. Though cooler than the previous year, 2008 still ranks as the eighth warmest year in the instrumental record. Of the past 128 years, a whopping 120 have been colder. The ten warmest years on record have all occurred between 1997-2008. Since 1880, the Earth’s surface temperature has increased by 1.4 °F. There is no doubt that global warming is a result of the industrialization of our civilization. Humans have increased the concentration of greenhouse gases (primarily carbon dioxide) in the lower atmosphere. The rise in carbon dioxide has been directly monitored since 1958, and is known before that time from analyses of air bubbles in ice cores. That these gases warm Earth has been understood for 110 years, since the discovery of the greenhouse effect by Svante Arrhenius. So let’s be clear. It’s getting warmer, and we’re the reason why.

Annual (black) and five-year running mean (red) of the global mean temperature. Despite yearly fluctuations, the upward trend of temperature is clear. (Source: NASA. )
Click on image for larger version.)

Why, then, are there times of cooling? The simple and honest answer is that climate is complicated. Although greenhouse gas emissions have tended to steer Earth’s climate since the Industrial Revolution, other factors also influence climate. Some of these factors are natural, the tendencies of a dog off-leash; some are not. The 2008 and winter ’09 coolings are most likely of the natural variety and caused by far-away changes in the tropical Pacific Ocean, specifically the appearance of La Niña.The tropical Pacific Ocean can be thought of as a pool of tepid water sloshing back and forth from one side of the Pacific bathtub to the other every couple of years. When warm water sloshes to the eastern Pacific, El Niño has arrived. Global surface temperatures rise. When warm water spills back to the west, La Niña has taken over. Through much of 2008, La Niña prevailed—and, as expected, the Earth’s surface temperature decreased. El Niño/La Niña also wreak havoc on global climate by altering atmospheric circulation, particularly the position of the jet streams. During La Niña, the polar jet stream intensifies over North America and shifts westward, directing Arctic air and storms into the Midwest. This is our current predicament. (Incidentally, while La Niña delivers record cold to Michigan, California basks in record warmth.) Other factors can cause climate deviations. From the mid-1940s to the mid-1970s, several factors, natural and human-made, conspired to cool Earth’s surface:

At the same time, the end of World War II brought about an increase in manufacturing and, with it, an increase in emissions of tiny pollutants commonly referred to as aerosols in the scientific lexicon, but more commonly knows as haze and smog. Unlike greenhouse gases, aerosols reflect solar radiation back to space causing surface cooling. The lessons of 2008 and the mid-century cooling are clear. Climate is not a well-heeled pooch; it saunters back and forth. But we know that these cool periods are simply distractions from a decidedly upward trend. Global temperatures have been rising and will continue to rise until atmospheric greenhouse gases are stabilized. But the rise in Earth’s surface temperatures will not be steady; there will be future 2008s. There may even be whole decades when the average global temperature does not increase or even decreases. Such events do not refute global warming; they confirm the complexity of climate.Ironically, while the bloggers squabble over whether 2008 signals the onset of the next ice age, the climate-science community has moved on and is making startling discoveries. The most surprising news of the past couple of years has been the rapid retreat and thinning of Arctic sea ice. In 2008, the sea-ice melted to its second lowest point on record. From the other pole comes evidence that Antarctica has been warming over the last 50 years. This means warming has now been documented on all continents. Most recently, the Audubon Society released a report suggesting that bird species throughout North America are responding to global warming by wintering farther north than they did 40 years ago. So, while I can’t promise my son a snow-free Michigan winter, I can promise him an interesting and changing climate future.