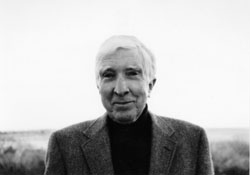 At the end of January, John Updike died at 76. The memorialists admired him as a fiction writer, and certainly his novels and short-stories brought him fame and fortune. He was an art critic and a poet too, not to mention a skilled draftsman who spent a year in art school. Above all, Updike was a great wordsmith: “His sentences are fresh-painted … he is a fabulous noticer and expander.” So said one obituary writer; another admired “all those perfect, shining sentences.”

Good dictionaries nowadays usually have example sentences from named authors. The sentences don’t tell us what the words mean—the definitions do that—but they show their flavor. In school, we learn the difference between denotation (“meaning”) and connotation (“associations”). In the eighth grade, I told a classmate with beautiful brown eyes that they were bovine. I had seen a beautiful Jersey calf not long before; she hadn’t seen one ever. Squinting suspiciously at me, she rushed to the dictionary and came back angry. “You said I look like a cow!”

But there was no help in what came to hand. One dictionary gives some figurative meanings for bovine: “inert, sluggish; dull, stupid.” Our school library didn’t have that one available—fortunately for me.

Example sentences do all sorts of good things in dictionaries, and John Updike appears often in them. For instance, he’s there for backhoe (from his 1984 novel Witches of Eastwick) but just to show that ordinary people with no knowledge of excavating use the word. Updike turns up in the explanations of decaf and mocha too. So ordinary a word as mom gets an Updike quotation in a sentence that shows him as a noticer and expander at his best: “There was a taste, oilclothy, or like a hot windowsill paint, or the vanilla and nutmeg when Mom baked a cake.” He’s in there for pepperminty and rainbowy too. He’s even there for gauzy: “Isabel carried a gauzy beach dress.” Words like these stick out and sound good.

But then there’s the other kind of good words, the invisible ones.

In 1960, Updike wrote a short account of Ted Williams last at-bat as a celebrated player for the Boston Red Sox: Hub Fans Bid Kid Adieu. Roger Angell, no mean sportswriter himself, declares it to have been “the most celebrated baseball piece ever.” Here’s the paragraph describing Williams’ finale at the plate:

Fisher, after his unsettling wait, was wide with the first pitch. He put the second one over, and Williams swung mightily and missed. The crowd grunted, seeing that classic swing, so long and smooth and quick, exposed, naked in its failure. Fisher threw the third time, Williams swung again, and there it was. The ball climbed on a diagonal line into the vast volume of air over center field. From my angle, behind third base, the ball seemed less an object in flight than the tip of a towering, motionless construct, like the Eiffel Tower or the Tappan Zee Bridge. It was in the books while it was still in the sky. Brandt ran back to the deepest corner of the outfield grass; the ball descended beyond his reach and struck in the crotch where the bullpen met the wall, bounced chunkily, and, as far as I could see, vanished.

In this paragraph are no contrived words like oilclothy or oatmealy, just words of the most ordinary kind contrived into a rising trajectory of suspense, interrupted at the end with an aside, “as far as I could see.” Those six words serve to delay the series of verbs that mounts to the climax: descended, struck, bounced. And then, at long last, vanished into the air of mythology. The ball was, as Updike tells us, “in the books while it was still in the sky.”

So too with Updike’s good words. They are artful without being arty. They show writing done well without seeming to have been written willfully.

They are just plain good words.

Do you have a favorite passage by an author? Please tell us in the comments section below.