Last summer, Britain’s University of Wolverhampton published a list of the world’s oldest jokes. Topping the list was an ancient Sumerian saying traced back to 1900 BC: “Something which has never occurred since time immemorial: a young woman did not fart in her husband’s lap.”

Got a favorite joke? Tell it on our Letters page (Clean only!)
OK, so Sumerian humor was a little low-brow. But even 4,000 years later, flatulence jokes still get laughs. Which brings up an interesting question: why? What makes us find certain things funny? And while our fellow species struggle grimly for survival, why did human beings develop the capacity to laugh?

Those are some of the topics a group of U-M researchers are exploring, in one of the most unique academic projects in America. Called the Humor at Michigan project, it brings university faculty together with some of the country’s top humorists to take a serious look at a funny topic. The project started with an amusing encounter between a professor and a cartoonist. In 2003, Charles Eisendrath, head of the U-M’s Knight Wallace Fellows in Journalism, invited Bob Mankoff, the cartoon editor of the New Yorker, to give a series of lectures on humor. After the final session, Mankoff asked Eisendrath a surprising question. 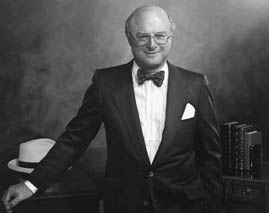 Charles Eisendrath, director of the Knight-Wallace Journalism Fellows, organized a conference of academics and comedians to discuss the nature of humor.

“He asked if he could ‘play for a while in my sandbox,'” Eisendrath recalls. “It turned out he was a failed scholar of clinical psychology, and he wanted to play at being an academic. So we brought him back to give a mini-course, and after attending the sessions, I thought, ‘My god! Why isn’t anyone systematically studying humor?’ I mean, it’s like waking up in the morning and realizing there’s no institution studying the sun. It’s such a huge aspect of human experience, and somebody should be studying it. And as the biggest research university in the world, it ought to be us.”

Eisendrath ran the idea past colleagues in the humanities, psychology and the Depression Center, and got an enthusiastic response. So they decided to form an interdisciplinary network, headquartered in the Institute for the Humanities, to promote the study of humor.

They hope it will grow into the world’s first degree program in humor studies.”Everyone has a slightly different take on it,” Eisendrath explains. “Humanities is interested in the communications aspect of humor. The psychologists are interested in its physiological effects. The Depression Center is interested in the possible therapeutic uses of humor. And I’m interested in the use of humor in journalism, and in its evolutionary function. Why is there such a thing? How did this develop?”

As Mankoff describes it, bringing humor into the academy could lead to an exciting array of research. “Everyone sort of takes humor for granted, but it’s actually a pretty big field,” he says. “You could ask a number of psychological and sociological questions about it. How is humor used in social situations? What are the cognitive processes involved in either getting or making a joke? Is the ability to produce humor linked to other types of creativity or to intelligence? Could humor be used to help alleviate or diagnose depression?”

To help jumpstart this research, Mankoff granted the university access to the New Yorker’s database of almost 70,000 cartoons, and they’ve already found their way into the lab. In one experiment, researchers in the Department of Psychology have shown cartoons to graduate student volunteers (and to Mankoff himself), after hooking them up to a device that tracks their eye movements.”

Let’s say you see a cartoon drawing of a pocket knife with the caption: ‘French Army Knife,'” Mankoff explains. “When you look closer at the knife, all it has are corkscrews. There’s a moment when it goes from being incongruous and confusing to ‘Aha! I get it!’ And we’re looking at that using eye tracking. People look all around the image, and at the moment they get the cartoon, their pupil size increases greatly.” The research could help scientists understand how the mind rapidly pieces together meaning from several related components.

Humor at Michigan has also hosted public events bringing U-M academics together with prominent humorists, from Pulitzer prize-winning cartoonist Pat Oliphant to writers from “The Daily Show.” As Eisendrath recalls, “Each group approached the other as sort of laboratory rats, people to be poked and prodded just to see what they would say. The humorists were interested in how humor could be researched, and how they could draw on that research. The academics were fascinated by how the humorists simply knew what was funny. It was a hilarious exchange, and serious too.”

The project has inspired so much enthusiasm that its organizers wonder why no one ever thought of it before. “I think it’s partly because of the nature of the topic,” Bob Mankoff says. “Humor is funny, so people think it’s frivolous. And there’s this confusion that occurs in the study of humor, where people want to both learn and be entertained. You get people who’ll go to a serious academic conference on humor and come away saying, ‘Gee, it wasn’t very funny.’ You know, that’s like going to a conference on human sexuality and complaining that you didn’t get laid.”

Daniel Herwitz, director of the Institute of the Humanities, believes those who scoff at humor studies ignore humor’s profound value to the academy. “I see humor as essential to the practice of keeping the university humane, if you will, and keeping it in touch with reality,” he says. “The university loves to study pain and depression and sadness and suicide and all kinds of things that are upsetting. But it has relatively little to say about happiness, joy, ecstasy—the high register of life. So exploring these phenomena is not a bad thing. “And at some level nothing is funnier than the idea of having an academic study of humor.” (He shifts into a pompous German accent.) “‘I am Professor Vincent Von Finkendorf, and I shall give you the necessary and logical formulaic conditions of the making of the joke.’ I mean, there’s something completely idiotic about that, yet sort of marvelous at the same time. And so in a way, the university is on display, in a complete and naked sense, if it turns its research methodologies to humor.”

With Humor at Michigan garnering increasing administrative support, including funding for two yearly PhD theses in humor studies, Eisendrath’s next goal is to fund an endowed professorship in the field. “About 3,200 people worldwide study humor, but all but four of them do it part-time, as part of some other specialty,” he says. “And none of those four is at the same institution. So with a very modest effort, the University of Michigan could become the world center of humor studies. And I think it’s going to happen.”

In the meantime, he looks forward to enjoying the research the project produces. “There’s no doubt in my mind that humor has an evolutionary function,” he says with a laugh. “And since all evolutionary functions begin with reproduction, I assume that humor does too. When you get down to the courtship of the amoeba, it’s not clear what the humor connection will be. That’s why I think the study of it will be fascinating—but also hilarious.”