Biography of a heroine 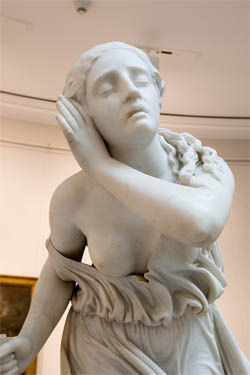 Some works of art have a backstory at least as intriguing as the work itself. “Nydia,” a marble sculpture by Randolph Rogers that entered the collection in 1861 and has been much beloved by visitors ever since, is one such case. Randolph Rogers was a hometown boy whose family was among Ann Arbor’s first settlers. He left the area as a young man to try to make a living as an artist in New York, where his remarkable skill at creating a bust from a block of found marble inspired his astonished employer at an engraving company to lend Rogers the money to travel to Florence to study with the sculptor Lorenzo Bartolini. Rogers’s progress was speedy and he soon established a studio in Rome and became a commercial success, crossing the Atlantic many times over to fulfill commissions for American and Canadian clientele.

On a visit to Ann Arbor, very likely to visit family, the artist met the newly arrived Professor Henry Frieze and the two struck up a friendship. Frieze visited Rogers’s studio in Rome and returned home with photographs of his work and a plan to acquire a marble rendition of “Nydia” for the University.In subject matter and style, the Rogers sculpture was perfectly attuned to period tastes for classicized, heroic themes nobly rendered, and the artist made a small fortune reproducing this work alone. “Nydia” depicts a character in a wildly popular novel by Sir Edward Bulwer-Lytton, “The Last Days of Pompeii.” (Today Bulwer-Lytton is better known for a contest at San Jose State University named in his honor for the worst first sentence in a novel, inspired by the opening line of his 1830 work “Paul Clifford”: “It was a dark and stormy night…”) 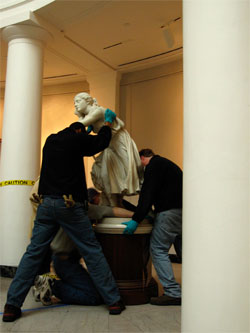 Workers return ‘Nydia’ to her home in the original wing of the University of Michigan art museum. (Photo courtesy U-M Museum of Art.)

According to Bulwer-Lytton’s tale, as the skies over Pompeii were obscured by smoke and volcanic ash, a blind slave girl named “Nydia” guided her master to safety by listening for the sounds of the sea and a waiting boat that rescued them from the conflagration. In order to raise the approximately $1,700 needed to purchase the sculpture, a group of University faculty and community members calling themselves the Randolph Rogers Art Association worked to raise the down payment, agreeing to pay the balance over two years. Protracted negotiations led Rogers to sell the first copy of “Nydia” to a Canadian patron, but a second was soon carved and shipped to Ann Arbor, making it the first work by a living artist to enter the collections. The Regents authorized the building of a special alcove adjacent to the recently created museum galleries in Mason Hall for its display, and the public was charged a small fee to view the life-sized marble statue—at that time quite a rare sight. The first major town-gown partnership in the visual arts had been a stirring success, and the Randolph Rogers Art Association, later renamed the Ann Arbor Art Association, would continue the tradition of community support for the Museum for nearly a century. 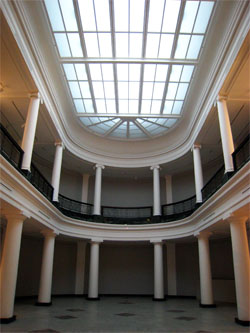 Restoration of the museum’s familiar apse, which houses ‘Nydia’ and other American and European art. (Photo courtesy U-M Museum of Art.)

Though he would become one of the most sought-after artists of his day, Rogers retained a lifelong affection for his hometown and its leading institution. He bequeathed the contents of his studio in Rome to the University, then surprised administrators by delivering his gift in 1885, prior to his death. It was the second most valuable gift in monetary terms that the University had yet received (the most valuable was also a gift of art, from Henry Clay Lewis in 1884), and news of the celebrity artist’s generosity made national news. Unfortunately, poor storage conditions and a shift in attitudes away from valuing copies of works of art led to the loss or destruction of most of the works, fragile plaster casts of the artist’s commissions in bronze and marble.Excerpted from “UMMA: A Beacon for Art,” a commemorative publication available March 28, 2009 when the Museum reopens to the public.