Violent media numb viewers to the pain of others 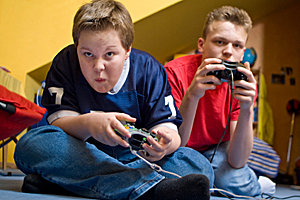 Violent video games and movies make people numb to the pain and suffering of others, according to a research report published in the March 2009 issue of Psychological Science.The report details the findings of two studies conducted by University of Michigan professor Brad Bushman and Iowa State University professor Craig Anderson.The studies fill an important research gap in the literature on the impact of violent media. In earlier work, Bushman and Anderson demonstrated that exposure to violent media produces physiological desensitization—lowering heart rate and skin conductance—when viewing scenes of actual violence a short time later. But the current research demonstrates that violent media also affect someone’s willingness to offer help to an injured person, in a field study as well as in a laboratory experiment.

“These studies clearly show that violent media exposure can reduce helping behavior,” said Bushman, professor of psychology and communications and a research professor at the U-M Institute for Social Research.”People exposed to media violence are less helpful to others in need because they are ‘comfortably numb’ to the pain and suffering of others, to borrow the title of a Pink Floyd song,” he said.In one of the studies, 320 college students played either a violent or a nonviolent video game for approximately 20 minutes. A few minutes later, they overheard a staged fight that ended with the “victim” sustaining a sprained ankle and groaning in pain.People who had played a violent game took significantly longer to help the victim than those who played a nonviolent game—73 seconds compared to 16 seconds. People who had played a violent game were also less likely to notice and report the fight. And if they did report it, they judged it to be less serious than did those who had played a nonviolent game.In the second study, the participants were 162 adult moviegoers. The researchers staged a minor emergency outside the theater in which a young woman with a bandaged ankle and crutches “accidentally” dropped her crutches and struggled to retrieve them. The researchers timed how long it took moviegoers to retrieve the crutches. Half were tested before they went into the theater, to establish the helpfulness of people attending violent vs. nonviolent movies. Half were tested after seeing either a violent or a nonviolent movie. Participants who had just watched a violent movie took over 26 percent longer to help than either people going into the theater or people who had just watched a nonviolent movie.The studies are part of an on-going research program into the causes and consequences of human aggression conducted by Bushman, who is also affiliated with VU University Amsterdam.