“The show no sooner ended when my son phoned me and said: ‘Dad, I learned a lot about you today during your Veterans Radio interview. I just want to say thank you for what you did over there and thank you for being my father.'” —An email sent from a listener to Veterans Radio 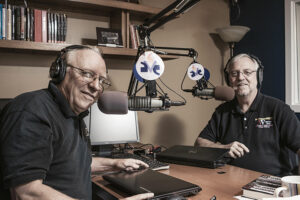 Dale Throneberry and Bob Gould launched their Veterans Radio show six years ago when Throneberry, at a career crossroads, began hearing the stories of fellow veterans and realized that many of them needed a place to tell and hear their stories.

It all started for Dale Throneberry in an old man’s garage.It was six years ago. Throneberry was an independent insurance agent. The old man was one of his long-time clients, and he was dying. Throneberry went to the man’s home to help him get his affairs in order. As they approached the house, the man invited Throneberry into his garage. “There was a large banner with the 101st Airborne logo,” Throneberry recalls, “and there were all kinds of items from the Army.”The man shared with Throneberry his World War II experiences, one after another. They were riveting, compelling. “The man’s wife later told me her husband never had told anyone these stories before,” Throneberry says. Soon after that, another World War II veteran shared with Throneberry his experiences in the Pacific—more incredible stories that no one had heard. “I felt so sad that nobody knew who these guys were,” says Throneberry. “I started thinking more and more about it, looking around for ways to get these stories out.”He had a couple of other personal reasons these untold stories resonated. Throneberry, 63, of Ann Arbor, has a few of his own stories from his service as a helicopter pilot with the U.S. Army’s 195th Assault Helicopter Company from 1968 to 1969 in Vietnam—among the most deadly years of the war. Also, he knew his father had served during World War II with the U.S. Coast Guard. He had died when Throneberry was 15. Throneberry knew little of his father’s service other than that he had served in Iwo Jima and been awarded the Bronze Star — but that soon would change. It was also about that time that Blue Cross Blue Shield of Michigan informed agents at a meeting they were cutting commissions. That was all it took for Throneberry. He and fellow agent, Robert (“Bob”) Gould went out for a drink. “I said to Bob, ‘I can’t do this anymore. I got this idea,'” Throneberry says. He told Gould he had been thinking about starting a veterans radio program. He said he had heard one in Chicago, but the host had moved on to CNN. He wanted to start a veterans radio show, maybe reduce or eliminate the insurance peddling.Gould, 67, of Ann Arbor, also had served in the U.S. Army in advanced infantry training during the early 1960s. He listened, nodded, stuck his hand out. “I’m with you,” he said. Done.

On Nov. 15, 2003, Veterans Radio debuted on WSDS, then a popular country radio station in Ann Arbor, Mich. It’s been broadcasting ever since on weekends. The show has moved to a couple of different stations and now airs from 9-10 a.m. (EST) on eight stations around the country. In Ann Arbor, Veterans Radio broadcasts on WDEO, 990-AM.Three regulars make up the staff: Throneberry, who serves as executive director; Gould, the producer; and Gary Lillie, who served with the U.S. Navy in Vietnam in the mid-1960s. Throneberry earned a bachelor’s degree in education and master’s degree in communication from U-M in 1973 and 1975; Gould earned U-M degrees in 1976 (bachelor in general studies) and 1981 (master’s degree in education).The show features a wide variety of veterans, but steers clear of conflict.

“We decided we didn’t want to sit around and complain about the VA,” Throneberry says. “Veterans just need to tell their stories, just to get it out of them. We want these stories to get out before someone puts them in a textbook and messes them up.”

“We just act as moderators, we guide them,” Gould says of the interviews on the show. “But we let the vet tell the stories. They’ve been reticent about it. They’ll talk with other veterans, but there is a sort of anonymity.”

The show broadcasts over the internet as well as via radio, and archives its programs. Its potential audience now is 25 million veterans, Throneberry says, some 400,000 in southeast Michigan alone. The guests and topics have run the gamut. “What’s really cool is that week after week, we’re all over the map with subject matter,” Gould says. “It could be Desert Storm, World War I, women in the military—it’s eclectic.” Plenty of active-duty military and veterans from Iraq and Afghanistan also have been featured.But predictably, the most powerful shows are those long-withheld stories. “People have broken down on the program,” Throneberry says. One time, he was one of them. “We did a program on the Coast Guard and we got this call from a very old man. He said, ‘Hi ya, Dale, I knew your dad.’ And that was it. The tears just started coming.” The man, now deceased, sent Throneberry boxes of photos of his father.Others shows are more spicy—such as the one that featured famous pilot Chuck Yeager who spouted out “sons of bitches” before his more gentle hosts could stop him—or informative, such as shows that update veterans on benefits and pending legislation.

Occasionally shows are aired live from various locations, such as at a recent Eastern Michigan University football game, Selfridge Air National Guard Base and an American Legion post in Brighton. One show featured the efforts of two men to identify and honor the unmarked grave in Saline, Mich. of a soldier who fought in the first Revolutionary War battle.Many people listen to Veterans Radios on the internet, where they can call up previous, archived shows. Plenty have called or emailed their appreciation for the show, and folks have called from around the world. The feedback helps Throneberry and Gould know they’ve accomplished a pretty basic goal. “We want people to understand vets are ordinary people who have done extraordinary things,” Throneberry says, “and that just because they’re vets doesn’t mean they’re different.”

Go to www.veteransradio.net for more information or to hear live or archived shows.