With high-pitched squeaks, clicks and chirps and ultra-sensitive hearing, toothed whales and some bats zero in on prey by emitting pulses of sound and interpreting the echoes that bounce back. 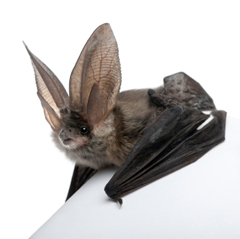 Over the course of evolution, the two groups acquired this remarkable ability independently, for use in very different environments, so you’d expect the means by which each accomplishes the feat to differ. Surprisingly, that’s not the case, a new study by researchers at the University of Michigan suggests.”The seemingly different echolocation abilities that evolved independently in whales and bats have a similar underlying molecular mechanism,” said Jianzhi (George) Zhang, professor of ecology and evolutionary biology. The finding overturns conventional thinking that the evolutionary phenomenon known as convergence is rare at the molecular level. The research is reported in the Jan. 26 issue of the journal Current Biology. A separate paper by another research group, published in the same issue of the journal, reports similar results.In traits such as appearance and behavior, convergence—the acquisition of similar structures or abilities in different lineages—is a well-known biological curiosity. Birds and bats separately developed wings and the ability to fly, for example; elephants and walruses each ended up with tusks. But because similar structures can be built from different blueprints, it’s unusual for these superficial similarities to share molecular underpinnings.The new research focused on a gene that codes for a protein called prestin, which plays an important role in hearing, amplifying sounds of particular frequencies. Zhang and colleagues searched publicly available databases for prestin gene sequences and found data for 25 mammal species, including pig, cow, dog, cat, mouse, 10 echolocating bats and three non-echolocating bats, but only one toothed whale, for which the hearing gene sequence was incomplete. Fortunately, Zhang had DNA from a bottle-nosed dolphin (a type of toothed whale) left over from a previous project, so his lab used that material to obtain the dolphin’s prestin gene sequence.Then the researchers constructed an evolutionary tree, considering only prestin sequences of the 25 species, not their entire genomes. In such trees, the distance between species is an indication of their similarity, with similar species clustering together and disparate species being widely separated. On the prestin tree, the dolphin clustered with echolocating bats, rather than with its rightful evolutionary cousins.”That was shocking,” Zhang said. After ruling out other possibilities, he concluded that molecular-level convergence explained the similarities between dolphin and bat prestin.To get at the specific amino acid changes involved, the researchers altered the prestin sequences by systematically removing amino acids and then creating new evolutionary trees with the altered sequences, continuing until bats and dolphin clustered with their actual kin instead of together. The results suggested that the same amino acid changes in bats and dolphin led to their misplacement on the prestin tree.As an additional check, the researchers used the correct evolutionary tree to infer the prestin sequences of various mammalian ancestors; then they mapped differences between the ancestral sequences and the present-day bat and dolphin prestin sequences.”By this method, too, we found that they share some of the same changes,” Zhang said. The similarity is no coincidence, he believes. It apparently came about due to natural selection operating on prestin.Prestin is found in the outer hair cells of the cochlea, which act as an amplifier in the inner ear. The amplification occurs through the process of electromotility—the conversion of electrical signals into motion, in this case, changes in the length of the hair cells in response to certain frequencies of sound. Only sounds of certain frequencies are amplified, and prestin has the important job of both detecting and selecting high-frequency sounds for amplification.”We think there are limited ways that prestin can acquire this ability,” Zhang said. Hence, selection for improved ability would follow the same evolutionary path in different lineages of echolocating mammals.Prestin function can be further studied using knock-in mice, in which systematically modified versions of a gene are substituted for the original, revealing how specific amino acid changes—like those that occur over evolutionary time—relate to a protein’s function.”I don’t study mouse genetics, but I hope those who do will further study this aspect of echolocation,” Zhang said. Sequencing prestin from other echolocating and non-echolocating whales also will help identify the amino acid changes that are critical for echolocation.

About the Author
Nancy Ross-Flanigan retired from U-M in 2011. While she was employed at the University, she was a writer at Michigan News, the University's central news and information service, Ross-Flanigan was the team's expert in ecology and evolutionary biology, geological sciences, and paleontology,
Social
Share on: Share on Twitter Share on Facebook