Lullabye, in a test tube 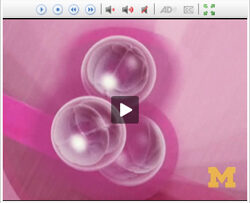 Gently rocking embryos while they grow during in vitro fertilization (IVF) improves pregnancy rates in mice by 22 percent, new University of Michigan research shows. The procedure could one day lead to significantly higher IVF success rates in humans.http://www.youtube.com/watch?v=ZnNS_yUFTDgResearchers built a device that imitates the motion that embryos experience in the body as they make their way down a mammal’s oviduct (a woman’s Fallopian tube) to the uterus. Currently in IVF, eggs are fertilized with sperm and left to grow for several days in a culture dish that remains still. Then the embryos are transferred to the uterus.”By making the cells feel more at home, we get better cells, which is key to having better infertility treatment,” said Shu Takayama, an associate professor in the Department of Biomedical Engineering and in macromolecular science and engineering. 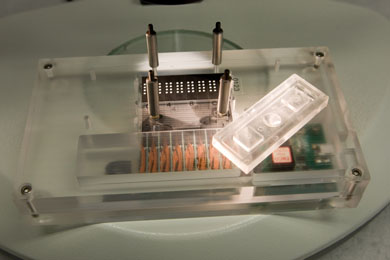 A new device to improve in-vitro fertilization uses Braille pins to provide gentle rocking motion to embryos that sit at the bottom of its funnel. Pregnancy rates in mice increased by 22 percent with the use of this device.

Takayama and Gary Smith, associate professor in the Department of Obstetrics and Gynecology at the U-M Medical Center, are co-authors of a paper detailing the findings published online in the journal Human Reproduction.Their device holds early-stage embryos, which are about half the size of the period at the end of this sentence, in a thimble-sized funnel. The bottom of the funnel is lined with microscopic channels that allow fresh nutrient-rich fluid to flow in and waste products out. The funnel sits on rows of Braille pins that are programmed to pulse up and down, pushing the fluids in and out of the channels.The current the Braille pins generate simulates flows that occurs in the body due to muscle contractions and the motion of hair-like projections called cilia that line the oviducts. In the body, these motions help to push fertilized eggs to the uterus and flush out eggs’ waste products. 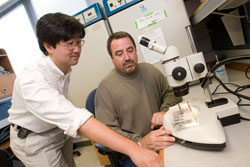 Compared with mouse embryos grown in a static dish, those incubated in the new dynamic device were healthier and more robust after four days. Those grown in static dishes contained an average of 67 cells. Those grown in the new device had an average of 109. Control embryos that had matured in the bodies of mice for the same amount of time had an average of 144 cells.Approximately 77 percent of the rocked mouse embryos led to ongoing pregnancies, compared with 55 percent of the statically-grown embryos. In a control group of mouse embryos conceived naturally and grown within the oviduct, 83 percent led to ongoing pregnancies.”One of our goals for years now has been to modify how we grow embryos in the lab to be more like how they grow in the human body, because we know that the human body grows them most efficiently,” Smith said.Infertility affects one in six couples, Smith said. Many of them turn to IVF, which can cost $15,000 per cycle and is often not covered by insurance. Currently, it has a success rate of about 35 percent.”If we could increase that, even just to 45 percent, that’s significant,” Smith said. “We’re making healthier embryos, which not only can improve pregnancy rates, but also could allow us to transfer fewer embryos per cycle and reduce the incidence of twins and triplets.”Through the company Takayama and Smith founded, Incept Biosystems, human clinical trials have begun.Smith is also an associate professor in the departments of Molecular and Integrative Physiology and Urology, as well as director of the Reproductive Sciences Program.The paper is called “Dynamic Microfunnel Culture Enhances Embryo Development and Pregnancy Rates.” The research is funded by the National Institutes of Health, the U.S. Department of Agriculture, the Michigan Economic Development Corp., the U.S. Army Research Laboratory and the Coulter Foundation.Foundation