The dean of network news 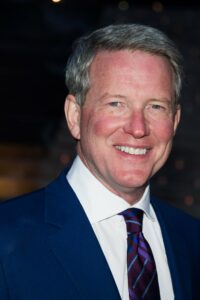 David Westin grew up in Flint, attended U-M as an undergraduate and for law school, and has been president of ABC News since 1997. In his office he keeps a football signed by Bo Schembechler. (Photo by Charles Sykes)

When David Westin (’74, JD ’77) was named ABC News president in 1997, media critics questioned whether the corporate lawyer, with scant experience in television journalism, was ready for prime time. Thirteen years later, Westin stands as the dean of network television news executives, respected for his ability to nurture talent, act decisively, and remain nimble in the digital age. “My demise was predicted long ago,” Westin says with a grin one January afternoon from his spacious Manhattan office at ABC News, where a football autographed by former Michigan coach Bo Schembechler is displayed on a bookcase with eight Emmys and two Peabody awards. “These jobs traditionally don’t have longevity. It can be like working as a manager of a baseball team. Management can just come in one day and say they want a change.”

Westin has prospered at ABC during a particularly tumultuous time at the network news division, with four changes in the anchor chair of World News Tonight since 2005. First came Peter Jennings’ death from lung cancer. Jennings was followed by U-M alumnus Bob Woodruff and Elizabeth Vargas, but that team gave way to Charlie Gibson in 2006 after Woodruff was seriously injured while reporting in Iraq.

Gibson’s retirement in September brought Diane Sawyer to the anchor’s chair three months later. When Gibson approached Westin last summer with his retirement plans, Westin pleaded with Gibson to reconsider. Gibson wouldn’t budge. So Westin turned to Sawyer, once the Good Morning America anchor, who didn’t immediately agree. Westin gave her five days to make up her mind. She took the high-profile post. “I wanted no uncertainty,” says Westin. “There’d been such turmoil. We needed stability.”

To fill Sawyer’s spot on Good Morning America, Westin turned to George Stephanopoulis, the former aide to President Clinton whom Westin had recruited to television news after Stephanopoulis had left the White House. Both high-profile moves came without the huge marketing campaigns launched by CBS in 2006 when Katie Couric became CBS news anchor, or by NBC in 2009 when it replaced Jay Leno with Conan O’Brien in 2009 on The Tonight Show. Westin says he intentionally downplayed the personnel changes to damp down expectations and allow the new hosts to maintain their show’s market share, and build from there. The strategy has worked. “The evening news isn’t a feature film, so we didn’t care about the first night,” says Westin. “I want to build the audience over time.”Longtime ABC newswoman Barbara Walters says Westin has earned the trust of network journalists with his easy-going manner and smart, strategic decisions. He even travels occasionally with correspondents, such as the 2002 trip he took to Havana with Walters for her interview with Cuba President Fidel Castro. “This is a very large organization and there are lots of different egos he has to balance,” says Walters. “I trust him as my boss and my friend.”

A long road from Flint

Westin, 57, dressed in a coal-gray suit, white shirt, and blue tie striped with green and white, is at ease in his fifth-floor office on West 66th Street on Manhattan’s Upper West Side, which has eight television screens on one wall. He commutes daily from Yonkers, just north of New York City, where he lives with his wife, Sherrie, and children, Lily, 14, and David, 7, in the home built by composer Jerome Kern in 1917. In the room where Kern composed the musical “Showboat,” Westin relaxes by playing the Chopin nocturnes on piano, or plugging in his electric guitar for a rendition of Eric Clapton’s classic rock tune, “Layla.” On summer weekends, Westin can be spotted out on Long Island Sound, tooling about on his 16-foot sailboat. Westin didn’t plan on a career in television news. He spent his childhood in Flint, Mich., the son of a tool-and-die maker at AC Spark Plug. At night his father, Lawrence, earned his bachelor’s degree at the University of Michigan’s Flint campus, which eventually landed him a job in management at Ford’s plastics plant in Saline. The Westins then moved to Ann Arbor, where David attended Pioneer High. In the summer of 1970—between high school and his freshman year at the University of Michigan—David Westin worked at the Saline Ford plant. He impressed his boss, who urged him to become a plant foreman, which paid $20,000 a year—a princely sum back then. Westin was tempted, but opted instead for college. He began on the Ann Arbor campus as a music major, studying oboe. He lived at home and worked part-time selling shoes to pay his way. By sophomore year, however, he’d become enthralled with philosophy, and he was determined to one day teach philosophy to undergraduates. His philosophy professor, however, suggested he study law instead, and by graduation day, Westin had been accepted into the U-M Law School.After clerking with US Supreme Court Justice Lewis Powell in 1978, he began his legal career with Wilmer, Cutler, Pickering, one of Washington, DC’s most influential law firms. He rose to partner, and left the firm in 1991 to become general counsel at Capital Cities/ABC. He moved quickly up ABC’s corporate ladder, becoming president of production and then president of the ABC Television Network Group. By 1997, he was tapped to lead ABC News.

Westin recalls that media critics were cautioning then that the end was near for the evening network news. But while viewership for ABC’s news program has declined from 18 million in the 1970s to about 9 million today, the evening news still reaches more Americans than any other medium in the nation’s increasingly diversified information network. Westin likes to point out that World News Tonight has twice as many viewers as all five cable news programs combined.”There’s still an appetite for a well-thought-out, well-edited summary of the daily events,” says Westin. “While it doesn’t mean that the nightly news won’t diminish, it’s going to be a long time before it dies.”Television news can draw millions of viewers when disaster strikes, as it did in January when a devastating earthquake struck Port-au-Prince, Haiti. Not long after that disaster struck, 79 ABC news personnel were on the ground. Diane Sawyer, Robin Robins and Kate Snow all had their own crews to inform the world. “We cover stories like that because it’s our responsibility,” he says. “There was an initial bump in ratings, and then fatigue. You need to strike a balance between what the audience needs and what the audience wants. You can’t ignore the audience, but you can’t pander either.”At a time when people turn to the Internet or their smart-phones for news and information, Westin says they are still drawn to stories told on the evening news or on popular news shows like Nightline, the late-night public-affairs program, or 20/20, ABC’s weekly prime-time news magazine now in its 31st year on the air. Those stories continue to captivate. “You can get your news any time, on any number of platforms,” he says. “There’s no scarcity of supply. But human beings are still the same. They have a curiosity about the world. We like to learn by having stories told to us. Narrative still counts.”