The following essay is adapted from Jonathan Metzl’s book The Protest Psychosis: How Schizophrenia Became a Black Disease (Beacon Press, 2010). 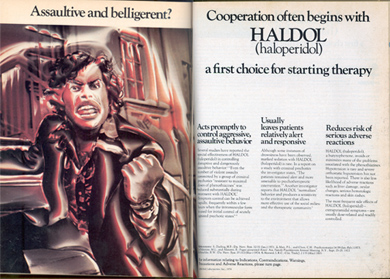 An ad for the drug Haldol from the ‘Archives of General Psychiatry,’ 1974, shows an angry African American man alongside the text ‘Cooperation often begins with Haldol.’ The association of schizophrenia with anger and blackness in the 1960s was a significant change from the original association of the illness with frail, nervous white women. (Image courtesy Jonathan Metzl.) 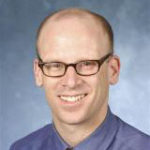 Jonathan M. Metzl, MD, PhD, is the director of the Program in Culture, Health, and Medicine. He is a joint-appointed assistant professor in psychiatry and women's studies at U-M. His reseach interests explore the interactions between psychiatry, gender, and culture. Metzl is a nationally known expert on gender representations in antidepressant advertisements; his current project examines the impact of these advertisements on doctor-patient interactions. In addition, he is completing work on a history of psychotropic medications from 1950-2001, as told through medical literature as well as American popular culture. Metzl also teaches courses at the undergraduate and graduate level, including "Men's Health," the "Cultural Histories of Depression," and "Medicine and Literature."
Social
Share on: Share on Twitter Share on Facebook