50 years of the Peace Corps 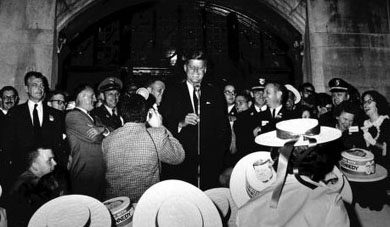 See a preview of the new documentary “The Passing of the Torch” (above).

From John F. Kennedy to Barack Obama, presidents have challenged University of Michigan students to change the world. In Kennedy’s case, the transformation was rapid and enduring: The Peace Corps was born.

“It was 50 years ago that a young candidate for president came here to Michigan and delivered a speech that inspired one of the most successful service projects in American history,” Obama told U-M graduates May 1. “And as John F. Kennedy described the ideals behind what would become the Peace Corps, he issued a challenge to the students who had assembled in Ann Arbor on that October night: ‘On your willingness to contribute part of your life to this country,’ he said, ‘will depend the answer whether a free society can compete. I think it can.'”

Kennedy, then a presidential candidate, stood on the steps of the Michigan Union at 2 a.m. Oct. 14, 1960, and delivered an impromptu speech before thousands of students who waited for hours in the fall chill. He challenged them to promote peace by working in developing countries around the world. The student response helped rapidly turn the idea into a reality. 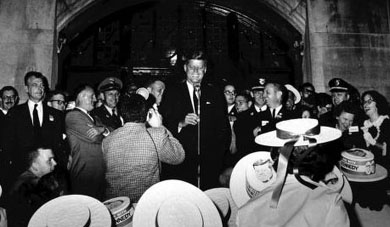 WELL AFTER MIDNIGHT ON OCTOBER 14, 1960, PRESIDENTIAL CANDIDATE JOHN F. KENNEDY ARRIVED AT THE STEPS OF THE MICHIGAN UNION. THIS WEEK, U-M CELEBRATES 50 YEARS OF THE PEACE CORPS, WHICH WAS FIRST INSPIRED BY THAT SPEECH.

To commemorate the 50th anniversary of the birth of the Peace Corps, U-M will host a series of events that include the debut of a new film, “A Passing of the Torch,” a national symposium, shows, guest speakers, and reunions.

Alan Guskin, a then-23-year-old graduate student who witnessed Kennedy’s 1960 speech, returns to the Michigan Union at 2 a.m. this Oct. 14 to speak to a crowd celebrating the anniversary. Guskin will detail how he and other students and faculty were inspired enough to take action: they wrote letters, organized groups, conducted petition drives, and built momentum that led to the Peace Corps’ establishment by executive order on March 1, 1961.

“A lot of people say the ’60s began after Kennedy was assassinated, but really the student activism with thousands of people getting involved started with that speech,” Guskin said. “We were the ’50s generation that didn’t do much until then. What stimulated us was the sense that the torch was being passed to a new generation. We wanted to do something but we were never stimulated to do something until then.”

Guskin, along with other students and faculty who pushed for the establishment of the corps, participated in selecting the first class and were among the first volunteers sent overseas. Over the past half-century, more than 2,331 U-M alumni have served in the Peace Corps, the fourth-highest total of any university.

Guskin said that activism was evident when Kennedy adviser Chester Bowles came to U-M after the speech and students pressed him to elaborate. Bowles hadn’t heard Kennedy’s impromptu remarks asking students if they would be willing to serve their country by going to places like Ghana but they had been recorded and staffers promptly took action.

The activism also was apparent, Gaskin said, when he took a letter to the Michigan Daily student newspaper’s editor Tom Hayden, who would become a national icon of 1960s student activism as the author of the 1962 Port Huron Statement, the manifesto of Students for a Democratic Society. The Daily was part of the push for the establishment of the corps, Guskin said, noting then-Daily editorial director Phil Power also was part of the effort and an early champion of greater student involvement in university governance.

“The JFK/U-M/Peace Corps story reads like fiction because of the amazing set of circumstances, coincidences and efforts by our students and faculty that enabled it to happen,” said John Greisberger, director of U-M’s International Center. “Student activism and engagement is a point of pride for this university, and what was started in 1960 continues today as thousands of our students every year accept JFK’s challenge ‘to serve the cause of peace’ by engaging in community service locally, nationally and internationally.”

Sargent Shriver, founding director of the organization and Kennedy’s brother-in-law, wrote the Peace Corps probably would “still be just an idea but for the affirmative response of those Michigan students and faculty. Possibly Kennedy would have tried it once more on some other occasion, but without a strong popular response he would have concluded that the idea was impractical or premature. That probably would have ended it then and there. Instead, it was almost a case of spontaneous combustion.”

Former U.S. Sen. Harris Wofford (D-Penn.), an aide to Kennedy who helped found the organization and taught the first Peace Corps class at U-M, will be on campus Oct. 14. Wofford wrote in his memoir, “Just as it had been the one innovative idea in his campaign, during his thousand days in office it was his primary specific answer to those who asked what they could do for their country.”

Guskin recalls Wofford coming to the Michigan Union in 1961 to speak to the first class of Peace Corps volunteers going to Thailand. Guskin never forgot when Wofford told them not to consider themselves U.S. ambassadors but to instead speak as real Americans, telling the people they met exactly how they felt even if it was negative, because that freedom would send a much more powerful message about what the United States was all about.

“It did change my whole life,” Guskin said of his Peace Corps involvement. “I was a graduate student in social psychology and after watching the debate (Kennedy and Richard Nixon held their third debate hours before JFK arrived at U-M) we were interested in issues but we weren’t activists. But Kennedy challenged us and we got turned on. I remember saying, ‘Wow, that’s exciting.'”

After joining the Peace Corps, “I gained what I call ‘true humility,'” he continued. “Other people love their cultures as much as you love yours and that changes your way of looking at the world and this country.”

He predicted that many of the members of the class of 2010 would wind up being influenced and inspired by the current president as he was by Kennedy, saying both represent generational change.

“What is certain—what has always been certain—is the ability to shape that destiny,” Obama said at U-M. “If you are willing, as past generations were willing, to contribute part of your life to the life of this country, then I, like President Kennedy, believe we can. Because I believe in you.”

For a listing of events and more information about U-M and the Peace Corps, visit: peacecorps.umich.edu/events.html