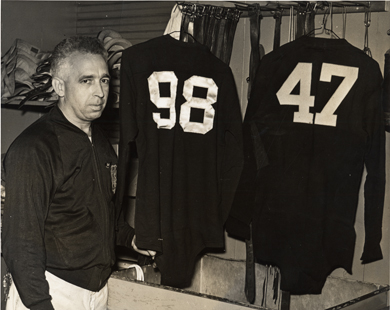 Ron Kramer, the former Wolverine tight end, passed away on September 11 this year. Kramer was widely regarded as the lone bright spot of Michigan football in the mid–to-late 1950s. Bigger and stronger than the competition despite playing both ways, his time at Michigan was so singularly dominant that head coach Bennie Oosterbaan retired his jersey after his senior season in 1956, making him one of seven players in 131 seasons to see his Michigan football jersey, number 87, retired.Kramer was one of U-M’s greats. But few eulogies noted that Kramer was nearly the last of a very rare breed indeed: football players whose jerseys had been retired. His death leaves Al “Ox” Wistert (number 11) as the only living Wolverine with his football jersey retired, none of them having played after 1956. 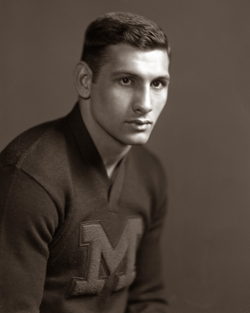 Ron Kramer, who passed away in September, was the second-to-last man alive to have had a U-M football number retired. (Photo courtesy U-M Bentley Historical Library.)

If it seems strange that U-M football hasn’t retired a single number in more than half a century, the story of how the Wolverines started honoring players that way is even more unlikely.

At U-M, the tradition of retiring jerseys started not with a head coach or an athletic director, but with an equipment manager, Henry Hatch.After Bennie Oosterbaan’s record-setting career at wide receiver ended in 1927, sportswriters noted that equipment manager Henry Hatch, who assigned numbers for the football team, had taken Oosterbaan’s number 47 out of circulation prior to fall 1928. A decade later, before the 1938 season—between the time Harry Kipke coached his last game for Michigan and Fritz Crisler coached his first—Hatch made it official, announcing to the media that number 47 would never be worn again. Just two years later, Hatch told the media in November 1940 that Tom Harmon’s number 98 would see its last when Harmon hung up his cleats, a decision that seemed to presage Michigan’s 40-0 romp over the Ohio State Buckeyes, which propelled Harmon to win the sixth Heisman Trophy ever awarded, the first to a Michigan player. If allowing the equipment manager to retire numbers seems unorthodox today, at the time no one objected. When Harmon was honored, one newspaper caption referred to retiring jerseys at Michigan as “Henry’s niche of fame.”

More than seventy years after Hatch established the custom of retiring jerseys at Michigan, things have gotten a bit more formal.Despite winning a national championship, for instance, former head football coach Lloyd Carr said he “was never under the impression” that it was in his power to retire a jersey. One of athletic director Dave Brandon’s priorities is setting a consistent standard for retiring jerseys at U-M. Only three sports, football, baseball, and basketball, have retired jerseys, but with some 27 sports at Michigan, Brandon says now is the time to set a consistent standard. “Should the player have graduated from Michigan? Should professional success factor in? What about the player’s level of involvement and giving back to the University? These are all things we’re looking at,” Brandon told Michigan Today.Historically and financially, Michigan football drives the rest of the athletic department. But when it comes to retiring jerseys, the team has a bit of a backlog. The most recent player to have his jersey retired was Kramer, who graduated after the 1956 season. The last football jersey retired was President Gerald Ford’s number 48, in 1994—and he played two decades before Kramer donned the winged helmet. After Oosterbaan and Harmon, the next honorees were the Wistert brothers, Francis, Albert, and Alvin, a trio of tackles from Chicago who all wore number 11. Francis “Whitey” Wistert paved the way for his brothers to attend Michigan, playing on the national championships teams of 1932 and 1933.Oosterbaan didn’t wait for Henry Hatch to take Ron Kramer’s number 87 out of circulation. He did it for himself at the 1956 Football Bust.

Kramer’s exploits came at a down time for Michigan football, after the dominant days of Fielding Yost and Fritz Crisler, and before Bo Schembechler rescued the tradition, and they’ve been lost to a generation of Michigan fans. Lost even to people who should’ve known better.In his 2010 book, “If These Walls Could Talk,” Hatch’s successor, equipment manager Jon Falk, recalls introducing freshman wide receiver Anthony Carter to Kramer. “Did you used to be a player?” the upstart receiver, still shy, asked Kramer. Falk interjected before number 87 could say a word, one of the few times Kramer didn’t have his say. Falk told Carter to look up and down the field and point out the Michigan player wearing number 87. The freshman, so promising that he’d already been assigned number 1 by Bo Schembechler, responded, “I don’t see anyone wearing 87.” “And you won’t,” the equipment manager said, listing Kramer’s accomplishments as a two-time All American.More than a half-century later, Kramer said that he’d be willing to let another Wolverine wear number 87, provided they were able to carry on the legacy.”If there’s a young guy who feels strongly about the number and who can do justice to the number 87, why not?” Kramer told Michigan Today in summer 2010.

Former head coach Lloyd Carr said that while it might be easier to simply avoid the controversy of retiring football jerseys, that wouldn’t be the right thing. Carr is part of a preliminary and advisory committee Dave Brandon put together to explore the issue.”At a place like Notre Dame, where they’ve never retired jerseys, the decision is easy—you stick to what you’ve done,” Carr said. “But at Michigan we have retired jerseys, historically, and it’s something we should continue.”Who might be worthy of the honor? Carr mentioned Heisman Trophy winners Desmond Howard and Charles Woodson.”I’m not saying it should just be Heisman winners, because that eliminates certain positions,” Carr said. “There’s also a number of Schembechler players who should get a look, but I’m not going to publicly get into naming names.”Some football players, unfortunately, cannot be considered, even though they might be deserving. Fielding Yost’s “Point-A-Minute” football teams may have put the Wolverines on the map—but neither Willie Heston nor Ernie Vick nor any of the players who predated the forward pass can be a part of the retired jerseys dialogue. Why? Because numbers weren’t assigned at Michigan until the 1915 season.

Other sports have other ideas

While the football team’s approach to number retirement has been, well, unorthodox, other U-M teams have clearer policies. But they run the spectrum from retiring lots of numbers to refusing to retire any.

Michigan baseball is by far the most active sport when it comes to retiring jerseys. 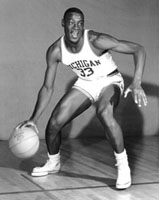 Crisler Arena is nicknamed “The House that Cazzie Built,” and Cazzie Russell’s number 33 is the only one that’s truly retired, though others have been “honored.” (Photo courtesy Bentley Historical Library.)

In men’s basketball, the custom of honoring and retiring jerseys has only started within the last two decades, starting in 1993, when guard Cazzie Russell’s number 33 was hung in the rafters. Former head coach Tommy Amaker, taking a page from coach and mentor Mike Krzyzewski’s book at Duke, hearkened to Michigan’s glory days by honoring the jerseys of past Wolverine greats, like Glenn Rice (number 41) and Rudy Tomjanovich (number 45).But as sports information director Bruce Madej explained, there is only one jersey that will never be worn again in “The House that Cazzie Built”—the number 33 once worn by the former Wolverines guard himself. Russell is widely credited with restoring Michigan basketball to relevance in the 1960s.

The other jerseys were honored by the program, but can still be assigned, Madej said.

With two national championships and more than a quarter of a century on the job, Michigan hockey coach Gordon “Red” Berenson could have retired a half-dozen jerseys by now. But he hasn’t, and he won’t, because he’s too much a believer in tradition. 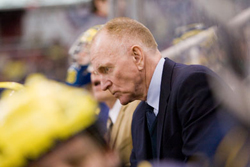 Ice hockey coach Red Berenson says no hockey player’s number has ever been retired, and as long as he’s coach, none will. (Photo: U-M Photo Services.)

Berenson said that when he was growing up, it was unusual to see hockey players wear numbers higher than 20. Berenson isn’t that much of a traditionalist. As Henry Ford might say, Michigan hockey players are allowed to wear any number, as long as it’s between 1 and 39.

“All of the men who’ve played for Michigan hockey have worn the same set of numbers,” he explains. “If we had guys wearing 77 and 99, then they’re getting away from what’s been done before, maybe calling for more spotlight than they can handle.”As Berenson explained it to Michigan Today, the size of college hockey teams and the scarcity of jersey numbers make retiring jerseys a tough proposition. It would require compromises Berenson doesn’t want.”If we start taking even more numbers out of circulation, we’d probably have to open up higher jersey numbers. And I don’t want to do that.””If we were to retire the number 7 or number 9, which have had a lot of great players, which great player would we be honoring?” Berenson said. “And if you’re not honoring any one player, what’s the point of retiring it? I don’t see myself retiring any jerseys. It’s more of a team focus.”The next guy might decide to go in another direction,” Berenson added, “and that’s just fine.” 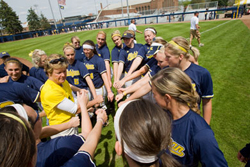 Women have participated in intercollegiate athletics at Michigan for decades, but none have had their jerseys retired.If there is any coach with the gravitas and the success to retire the first woman’s jersey at Michigan, it is longtime softball coach Carol Hutchins. But like Berenson, Hutchins has no intention of retiring any jerseys while she’s at the helm. To hear coach Hutchins tell it, the greatest honor any player can have is wearing the Michigan jersey and taking the number of a former Wolverine who helped pave the way. “We stress from day one that the girls have to honor players who wore the jersey before them,” Hutchins said. To help her players connect with that history, she has the women write essays, as freshmen, on the players who wore their jerseys before them.”We don’t really go where we haven’t been, when it comes to the numbers,” Hutchins said. “We use a traditional set of numbers—one girl wanted to be 88 once, but instead we gave her 44. Another girl wanted to wear number 5 and we gave her number 15 instead.” Hutchins is more interested in seeing her players connect with the program’s history than in taking jerseys out of circulation forever. But if any of her players were to get the honor, Hutchins said, Michigan Hall of Honor inductees Penny Neer, Vicki Morrow, Alicia Seegert and Jenny Allard should merit consideration.”When you put on a Michigan jersey, you’re honoring a lot of people,” Hutchins said, “and that’s not only the players who came before you, but ones who will come after.”

What do you think? Should Michigan retire jerseys at all? Should it be left to the coaches? Which Wolverines would you nominate for having their numbers retired?