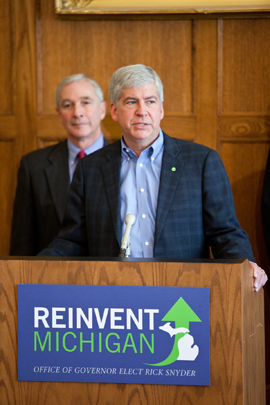 Michigan’s governor-elect, Rick Snyder, has strong ties to the University of Michigan. The Republican, voted in to his first elected office on November 2, holds three U-M degrees: a bachelor’s (1977), an MBA (1979) and a JD (1982).

As a venture capitalist he invested in a startup created by U-M researcher Vic Strecher, called HealthMedia. And Snyder returned to campus, at the Gerald R. Ford School of Public Policy, to name key members of his staff.

Besides Snyder, at least four U-M alumni were elected to offices they had not held before. All are Republicans.