A shark inspires an artist to build a new hydropower generator 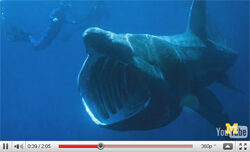 http://www.youtube.com/watch?v=le4JOwIp0IIThe artist’s hair was wet, and he apologized for shivering. When I met Anthony Reale, he had just popped out of a tank of 60-degree water at the Marine Hydrodynamics Lab.This was the seventh time in three days he’d emerged from the chilly basin. The last four times, he wore a dry suit he borrowed from friends. But the first three dives he did in jeans and a t-shirt. He had no other choice.A weld had broken on a gear of the prototype hydro-powered generator he’d designed and built, inspired by a documentary about a shark that swims with its mouth open. The hydro lab was testing the device. If he couldn’t fix it, he couldn’t test. 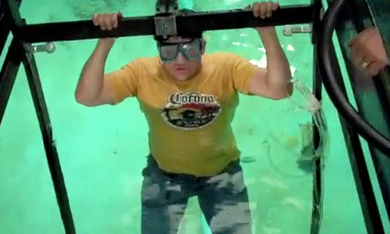 Anthony Reale dives into the water at U-M’s hydrodynamics lab to tweak the Strait Power turbine.

“It took me 711 hours and 4,800 boards of wood to build my Strait Power,” Reale said. “Nothing was going to stop me from testing.”Reale is not an engineer. In December, he finished an art degree at the College for Creative Studies (CCS) in Detroit. The Michigan native got his bachelor’s in product design. 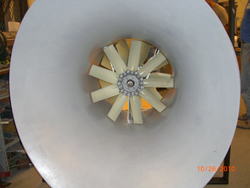 The Strait Power turbine funnels water through a pair of openings to generate power.

Strait Power, his studio project, is modeled after the basking shark. The fish swims with its mouth gaping, filtering water through its gills to catch bits of food. This filtering creates a slipstream that makes it easier for the shark to glide through the water.Reale spent hours sketching the muscles of the fish’s mouth to memorize its shape. Then he designed a machine that, like the fish, compresses and speeds up the flow of the water around it to extract more energy out of it.He collaborated on the project with U-M researchers who had been working on something similar to power remote research camps in Alaska, where they travel each spring to monitor the ecosystem. Although the camps tend to be near rivers, they have historically kept the lights on with gasoline or propane generators. Generating electricity from flowing water would be safer and better for the environment, says hydro lab director Guy Meadows, a professor in the Department of Naval Architecture and Marine Engineering.Dams, however, which are the usual sources of hydropower, cause serious environmental problems from blocking fish access to depleting oxygen levels in water. Reale calls Strait Power “A hydroelectric solution without the dam problem.”In December, in the lab’s 100-yard-long, 22-foot-wide, 10-foot-deep tow tank, the first rounds of testing took place. They went well. Reale says his design improves the efficiency of a single turbine blade by 40 percent. A patent is pending.Meadows is looking into taking the turbine to Alaska in the spring for field tests. And Reale envisions units suspended in the Detroit River, powering the Motor City.”This,” Reale says, “is my art.”

Like the “fish technology” invented by U-M professor Michael Bernitsas, Strait Power offers a path toward harnessing hydropower without the environmental damage caused by dams.