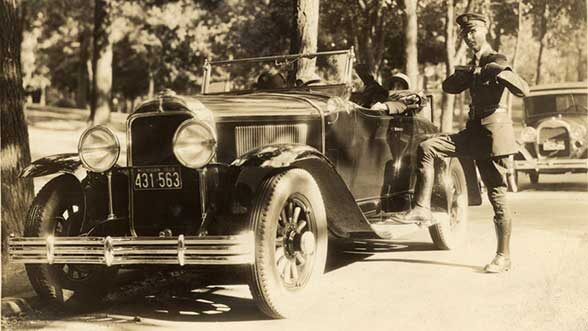 It was not that he opposed the automobile on principle, U-M President Marion LeRoy Burton said. He knew it had become “an obvious necessity in modern life.” But in the midst of the great American car craze of the 1920s, the automobile at U-M was becoming not just an annoying distraction but a downright menace. 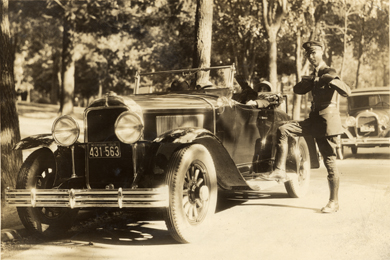 Chester Youngs was the police officer assigned to enforce the university’s rules on student driving. The skinny giant became well known to students, who nicknamed him “Andy Gump” after the tall and narrow comic-strip hero.

On the country roads outside of town, student drivers were alternately smashing up in spectacular crashes and “parking” in shady hideaways, for “anyone will admit that people will do on back country roads that which they would not do on State Street,” as one dean put it.

Detroit newspapers warned of “moral decay” in the back seats of student autos. Wealthy fraternity boys were seeing who could show off the latest and the biggest—not workaday Model Ts but big Stutz Bearcats and Cadillacs.

The new “Safety First” policy was a joke. An indignant alumnus told of stepping onto State Street just in time “to see a speeding car go shooting over the left-hand curb, smashing against a tree. The wind-shield goes to smithereens; the…driver drapes himself over the wheel; his…seat-mate goes out over the front door, and a fellow from the back seat takes his place in front, wrong side up. They all get themselves together, then laugh and shake hands. They do not learn a thing.”

President Burton’s successor, Clarence Cook Little, took office in 1925 determined to reinvigorate in loco parentis, the tradition by which college officials acted “in place of parents.” That year he tried a partial ban on autos; only upperclassmen in good academic standing could keep cars. But enforcement was ineffective and the craziness continued. By one count the upperclassmen were worse offenders than freshmen and sophomores.

When Little got news of another fatal crash one night in May 1927—this one in the country near Saline—he’d had enough. Following recent precedents at Princeton and Illinois, and with the regents’ hearty approval, he slapped down a total ban: From the following fall until he said otherwise, “No student…shall operate any motor vehicle.”

Joseph Bursley, dean of students, was authorized to relax the rule only in “exceptional and extraordinary cases.”Uproar ensued. By the Michigan Daily’s estimate, 3,000 students bought roller skates and raced around the Diag for days in ear-splitting protest, the steel wheels hitting the pavement late into the night. (Little denied the noise kept him awake, and he said the rollicking skaters were bringing “a better spirit” to the campus.)
The Daily’s editors, who had generally backed Little’s policies, including the partial auto ban, now decried “paternalism” and said the administration was undermining students’ property rights.

In a letter to the Daily, a woman student signing herself “M.T.” said she was beating the ban by taking evening pleasure rides around town by bus. “That’s all right, M.T.,” the editors replied, “but did the bus driver try to park anywhere?” 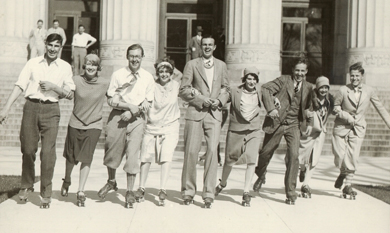 Joseph Bursley, dean of students, got the worst of it. His office was inundated by petitions for exceptions. Was a graduate student in his 40s really expected to forgo his car? How about students native to Ann Arbor? Under the new rules they could not drive at home, while students from Detroit could go home and drive all they liked. Students with jobs could have cars, so many produced letters from fathers and friends swearing they were gainfully employed. The dean eased up a bit but there was still a forest of rules to navigate. For example, students with exemptions were forbidden to carry passengers, unless for reasons of “family convenience or business necessity.” They could carry non-student passengers, but not for “social purposes.” And a driver could carry fellow students as passengers only if accompanied by “his father, his mother, or another older member of the family.”

The administration was favored by simple student turnover. With the passage of just two years, few students remained who had enjoyed the motorized free-for-all of the pre-1927 era, and when fatal accidents among students fell to zero, no one could say the ban had no good effects. Bursley began to implement exceptions for key events like the big weekend dance called J-Hop. And by the early 1930s, the Great Depression curtailed the car craze among all but the wealthiest students.

Sources include the papers of the Vice President for Student Affairs at the Bentley Historical Library, the Michigan Daily, the Michigan Alumnus, and Kent Sagendorph, “Michigan: The Story of the University” (1948).