Air pollution from industrial sources near Michigan public schools jeopardizes children’s health and academic success, according to a new study from University of Michigan researchers.The researchers found that schools located in areas with the state’s highest industrial air pollution levels had the lowest attendance rates—an indicator of poor health—as well as the highest proportions of students who failed to meet state educational testing standards. 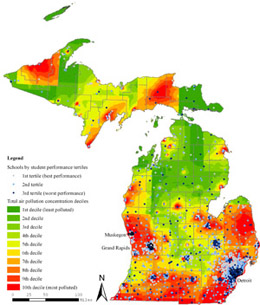 The researchers examined the distribution of all 3,660 public elementary, middle, junior high and high schools in the state and found that 62.5 percent of them were located in places with high levels of air pollution from industrial sources.Minority students appear to bear the greatest burden, according to a research team led by Paul Mohai of the U-M School of Natural Resources and Environment and Byoung-Suk Kweon of the U-M Institute for Social Research.The researchers found that while 44.4percent of all white students in the state attend schools located in the top 10 percent of the most polluted locations in the state, 81.5 percent of all African American schoolchildren and 62.1 percent of all Hispanic students attend schools in the most polluted zones.The study results are reported in the May edition of the journal Health Affairs. Mohai and Kweon presented their findings today at a Washington, D.C., forum sponsored by Health Affairs.”Our findings show that schools in Michigan were disproportionately located in places with high levels of air pollution from industrial sources. In addition, we found that Michigan’s minority students bear a disproportionately high share of the air pollution burden,” said Mohai, a professor at the U-M School of Natural Resources and Environment. Mohai is also a faculty associate at the Institute for Social Research.The majority of the most-polluted sites in Michigan are in the southern half of the state’s Lower Peninsula, although several places in the Upper Peninsula fall into the most-polluted category. In the Lower Peninsula, the most-polluted locations form a horseshoe-shaped band stretching from the Thumb region south to the Ohio border, then west to Lake Michigan and north to Grand Rapids and Muskegon. Locations with the highest levels of industrial air pollution include the Detroit metropolitan area, the Grand Rapids area and the Muskegon area.The authors conclude that Michigan and other states should require an environmental-quality analysis when education officials are considering sites for new schools. “While the U.S. Environmental Protection Agency issued a draft of voluntary school-siting guidelines in November, those guidelines might not be strong enough and could be ignored by many school districts,” said Kweon, a research investigator at the Institute for Social Research and an adjunct assistant professor in the School of Natural Resources and Environment.Geographic information system software was used to digitally map the 3,660 schools and to then overlay industrial air pollution data from the Environmental Protection Agency’s Risk-Screening Environmental Indicator data base.School attendance rates were used as a proxy for health levels at each school. As a school performance measure, the researchers used 2007 scores from the Michigan Educational Assessment Program, a standardized test that all third- through ninth-graders in Michigan public schools are required to take. Specifically, they used the percentage of students who failed to meet the state standards for English and math.Though the study focused primarily on the effects of industrial air pollutants, nearly identical patterns were found when the researchers analyzed data from the 2005 National Air Toxic Assessment, which includes on-road mobile sources such as cars, trucks and buses, as well as non-road mobile sources such as airplanes, tractors and lawnmowers.What explains this pattern of schools located near industrial pollution sources?The authors suggest that the large amount of land that a school requires and the costs of land acquisition probably mean that officials searching for new school locations focus on areas where property values are low, which may be near polluting industrial facilities, major highways and other potentially hazardous sites.Half of all states, including Michigan, do not require any evaluation of the environmental quality of areas under consideration as sites for new schools, nor do they prohibit building new industrial facilities and highways near existing schools.Children are known to be more vulnerable than adults to the effects of pollution. Exposure to environmental pollutants during important times of physiological development can lead to long-lasting health problems, dysfunction and disease, the experts said.”Our findings underscore the need to expand the concept of environmental justice to include children as a vulnerable population. Moreover, our findings show that children of color are disproportionately at risk,” the authors wrote. “There is a need for proactive school policies that will protect children from exposure to unhealthy levels of air pollution and other environmental hazards.”The authors offer four policy recommendations to address the problem:

Ninety-five percent of the estimated industrial air pollution around schools comes from 12 chemicals: diisocyanates, manganese, sulfuric acid, nickel, chlorine, chromium, trimethylbenzene, hydrochloric acid, molybdenum trioxide, lead, cobalt and glycol ethers.These pollutants come from a variety of sources, including the motor vehicle, steel and chemical- manufacturing industries, power plants, rubber and plastic products manufacturers, and lumber and wood products manufacturers. The 12 chemicals are suspected of producing a wide variety of health effects, including increased risk of respiratory, cardiovascular, developmental and neurological disorders, as well as cancer.The work was funded by a grant from the Kresge Foundation. In addition to Mohai and Kweon, the authors of the Health Affairs paper are Sangyun Lee, a postdoctoral researcher at the School of Natural Resources and Environment, and Kerry Ard, a U-M graduate student at SNRE and the Department of Sociology.