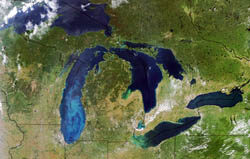 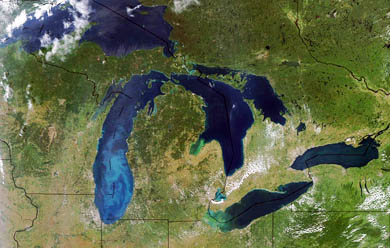 Once seen as doomed, polluted to death, the Great Lakes rebounded from low points in the ’60s and ’70s. But today they’re under stress from new attackers: invasive species, fisheries declines, and recently the reappearance of an old nemesis: dead zones. Over the past few years, Lake Erie has seen a return of an oxygen-depleted dead zone where no life survives. Aquatic ecologist Donald Scavia, director of the Graham Environmental Sustainability Institute and Special Counsel to the U-M President for Sustainability, is an expert in the formation of dead zones. Michigan Today asked him to explain what his research is showing.

What is a dead zone and what causes it? 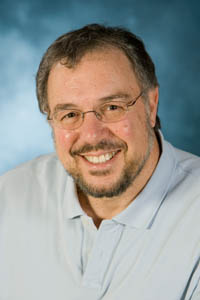 A dead zone is a colloquial term for a hypoxic zone, which is defined as an area of bottom water in a lake, estuary, or ocean where the concentration of oxygen drops below levels needed to support life. Two conditions are required to create a dead zone:

So dead zones form when nutrients—usually from fertilizer run-off or sewage treatment plants—stimulate excessive amounts of algae that sink to the bottom and decay, using up bottom-layer oxygen because it cannot get replenished from the atmosphere.

Is there still a dead zone in Lake Erie? Didn’t we fix that problem years ago?

We thought it was being fixed, but it’s back and growing again. Phosphorus control strategies in the 1970s and 80s did a good job of reducing loads from laundry detergents and sewage treatment plants, and the size of the dead zone declined. But, in the early 1990s, the trend reversed. Now the dead zone is now as big as it was back in the 70s. We are in the middle of a large federally-funded grant to explore this resurgence. Our current thinking is that the return of the dead zone may be driven by a combination of changes in agricultural practices and climate, coupled potentially with the invasion of zebra and quagga mussels.

These impacts are more likely to be felt in the rather shallow parts of the Great Lakes (for example, central basin of Lake Erie, Saginaw Bay, Green Bay); the open portions of the lakes are too deep to create dead zones.

Are there actions we can take today to minimize the likelihood that new dead zones will form in the Great Lakes in the future?

The actions needed to reduce and prevent dead zones in the Great Lakes and in places like the Chesapeake Bay and the Gulf of Mexico, are the same regardless of the exacerbating effects of climate change. That is, we have to reduce the amount of nitrogen and phosphorus getting into the water. In some regions, that requires upgrading sewage treatment plants and reducing other municipal and industrial sources (so-called point sources), but in most places the reductions have to come from the more diffuse agricultural sources (non-point sources). These non-point sources dominate the loads in the Great Lakes and most other impacted regions. The good news is the methods to reduce those loads are fairly well known:

These kinds of efforts are managed through the Agriculture Department’s conservation programs and are funded in the U.S. Farm Bill. But the good news ends there, however, because funding for those programs are neither sufficient nor a match for other policies that encourage large-scale, environmentally damaging production through commodity crop subsidies and market-shaping energy policies (e.g., calls for corn-based ethanol). How to fix the problem? Fix the Farm Bill!