Stephen Forrest is Vice President for Research at the University of Michigan. U-M receives millions in research funding from the federal government, and some of that is for defense-related research. U-M faculty have delved into drone technology and the psychology of terrorists while students have built effective IED detectors. Michigan Today asked Forrest to describe some of the ways 9/11 and its aftermath have affected research in the U.S. and at U-M. 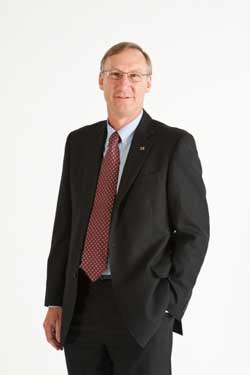 How much impact did 9/11 have on research?

I always say that 9/11 was the great index divider of our lives. There was the before and the after, and everything changed. The obvious change was that we fought two wars, with all the consequences of those decisions. With that came the need for human intelligence, not just the satellite imagery we’d been satisfied with before. We needed to know what was happening on the ground in a much finer detail. As with everything, something dramatic changed in research. There was an index divider between before and after. Defense research funding in general has grown. There are more problems to solve. And it’s less confined to a single agency: it’s not just the Dept. of Defense but also the Dept. of Energy, the National Security Agency, and the National Institutes of Health.

Did the nature of the research change?

Before 9/11, DARPA [the Defense Advanced Research Projects Agency, which funds military research] was engaged in long-range thinking with a military aspect. The internet came out of DARPA research—in fact it was originally called ARPANET. Fiber optics derived from DARPA research. Even cell phone technology was made possible by DARPA-funded research. That was basic research with a long horizon.

The wars shrank DARPA’s horizon dramatically. During the wars, the Bush administration turned its attention to real-time solutions: IED sensing, prosthetics, psychological research, medical technology. There have also been implications for other departments like the Dept. of Energy. For instance, there’s been an influx of funding for photovoltaics—solar power—because the Dept. of Defense needs mobile power-generating stations. They need power at forward operating bases in sunny places.

You also see technologies like drones and robotic surveillance—technologies where there are fewer and fewer people involved. Today a drone may be operated by someone in Washington D.C. One project I worked on personally was very small imagers with a wide field of view, like the human eye. A camera is big and bulky, so how could we make it smaller [for surveillance or the battlefield], yet have a wide view?Another place we’ve seen change is in airports and homeland security. The scanners that we have to deal with when we’re traveling—many of those applications existed, but their development was moved along more quickly.

What are the implications for a place like the University of Michigan?

University research has always been a contributor to national defense. That hasn’t changed. One thing that’s new is the involvement of the social sciences. How to identify human threats, how to understand other cultures in a more complex, comprehensive way. There’s also been more focus by the [governmental] departments on who’s doing the research. “Is it sensitive? Can we involve foreign nationals?” That came to a peak in the middle of the Bush Administration, but in the later years of that administration and more recently it’s dropped off.It became a huge issue at universities because we believe in open research, and we don’t engage in highly sensitive research. As the military and the DOD learn how universities do research, they seem to be getting more perspective. They know how we work, and that if the research is sensitive it should go to companies or defense research labs. That was a big one.

Do these changes look to you like they’ll stick? Or are we likely to see our defense research priorities change again?

After 9/11, this is the threat of our lifetime: it’s not a massive strategic foe, it’s an asymmetrical threat we face now, and we will for the rest of our lives.