I don’t remember much from my year as an 11-year-old, but I remember the day the towers came crashing down, along with the walls surrounding my childhood ignorance of the world and the cruelties it has to offer. 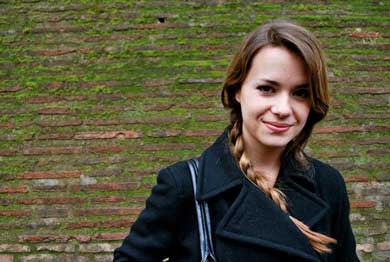 Nell Gable is a student in LSA at the University of Michigan.

I was sitting in my first and favorite class of the day, social studies, when I heard several doors slam in the normally quiet middle school hallway. I craned my neck to look out the window in our classroom door.

Several teachers were huddled in the hall, whispering and exchanging concerned looks. My teacher slipped out into the hall to join them, returning moments later, visibly shaken. She resumed the lesson, assuring us that everything was fine and that we should face front and stay focused. Still, I continued to hear doors slam and see teachers whiz by in the hall and I realized with growing certainty that it was definitely not fine.

Tension continued to spread among the teachers and administrator as they whispered to each other between periods. In my next class my teacher let on that something had happened in New York, but gave no detail. Vague explanations led students to create their own. In the line for lunch, one student announced, “Someone bombed the White House.” The line of eager listeners jeered and giggled nervously. One notoriously troublesome boy said next, “I heard a plane flew into the World Trade Center.” I whispered to myself, “Yeah right.”

I felt the first twinge of fear when my name was called over the loudspeaker, meaning my mother was there to get me. When you’re 11, there is no surer sign that something is up than a parent coming to get you early. At home, I did what everyone did: I watched the news clip of the planes hitting the towers over and over and over again. Seeing fear and sadness in my parents’ faces, I too began to cry, to worry and wonder what was happening to the world.

The attacks on 9/11 were the first major world event I remember being aware of. Prior to the attack I was cognizant of only myself and events that affected my life directly. That day I was woken up to a fear of a faceless foreign enemy and forced to confront the reality of a violence I was lucky enough to be unaccustomed to.

The most obvious lasting effects of that day tend to exist as the inconveniences of “heightened security measures”—getting patted down by security guards, stuffing all of my belongings into my pockets at football games since purses have been banned, or having my deodorant confiscated at the airport. Yet while these occurrences seem petty on the surface, they gain meaning as reminders of the greater threats that they represent.

My generation’s ability to compartmentalize the fear generated on 9/11 and re-package it in the form of an acceptance of minor hassles is our “normal,” the only normal we have ever known. “Normal” is knowing that to be an American is to be a target, that those inconveniences are trivial until they aren’t, and that things can change in an instant because they have.

Now, 10 years later, as an adult and infinitely more and less aware of the world, the monster is still waiting under the bed. However, I also realize that the attacks on 9/11 will likely impact my life in new ways now. I will compete for jobs that are hard to find due to a lackluster economy. I will travel farther and farther from home via ever-uncertain modes of transportation and I will continue to live as an American—both powerful and vulnerable.

So a certain amount of fear comes with all of this. And while I’d love to generate some concrete conclusion on the role of fear in my future, I won’t, because I know that after 10 years, in many ways, I am still and will forever be just watching, worrying and wondering what is happening to the world.