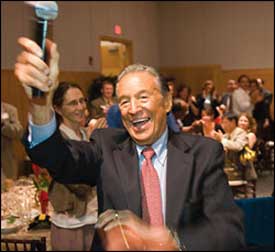 Throughout his 40-year career at CBS News, Mike Wallace perfected a legendary, take-no-prisoners approach to journalism. It was an approach that could be traced to the reporter’s formative days as a Michigan student, working at the University’s 10-watt radio station and student newspaper.

Wallace, AB ’39, HLLD ’87, died April 7 at the age of 93. He attained iconic status in broadcast journalism as a key component of the CBS News program “60 Minutes.” Wallace was part of the original “60 Minutes” team when CBS News launched the magazine show in 1968. He worked as a correspondent emeritus for the show since 2006.

“Society will remember Mike Wallace as a dedicated, hard-charging journalist,” says President Mary Sue Coleman. “At the University of Michigan, we know him as that and so much more. He was extremely generous with his time, his papers, his financial support, and, most important, his belief in this University and its role in today’s world. We could not have asked for a more enthusiastic and loyal alumnus, one whose words and actions changed both the University of Michigan and the world beyond.”

Wallace was especially committed to U-M’s efforts to develop skilled journalists. He was a leading contributor to the Knight-Wallace Fellows, a U-M program for mid-career journalists from the United States and abroad. He provided a $1 million gift to the program in 2002. Earlier he endowed a fellowship in investigative reporting and, with his wife, provided the building that houses the program, the Mike and Mary Wallace House. The Tudor house at 620 Oxford Street, built in 1911, was purchased for the fellows program in 1992.

Wallace also was a founding judge of the Livingston Awards for Young Journalists, the largest all-media, general reporting prizes in the field, which also operates out of Wallace House. Specializing in recognizing exceptional talent early, recipients include Tom Friedman of The New York Times, Christiane Amanpour of CNN, Michele Norris and Ira Glass of NPR, and David Remnick, editor of The New Yorker.

Charles R. Eisendrath directs the Livingston Awards and the fellowships and called Wallace “the best kind of father-buddy-mentor.”

“I met Mike through the Livingstons and marveled at the speed as well as the quality of his professional judgments,” Eisendrath says. “When I asked him to join a committee to buy a house for the fellowships, he just turned to Mary and asked, ‘Why don’t we do it?’ The step that transformed the program by boosting its development potential took all of 15 seconds.”

Wallace also served as honorary co-chair of the Michigan Difference Campaign, the University’s largest-ever fundraising campaign. It exceeded its $2.5 billion goal in 2007, more than a year ahead of schedule, and raised more than $3.1 billion by the end of the campaign in 2008. In the 1990s, Wallace was volunteer co-chair of the Campaign for Michigan that raised $1.4 billion.

Wallace discovered his passion for broadcasting and journalism while working as a U-M student at the University’s radio station and student newspaper. Decades later he donated a major collection of papers documenting his 40-year career at CBS News to Michigan’s Bentley Historical Library. The papers span his career at the network and “60 Minutes” and provide a window into the workings of television news.

The “60 Minutes” program files include transcripts of broadcasts and interviews with participants, viewer correspondence, background research, newspaper clippings and photographs, and story ideas in various stages of development that were dropped or never aired. His collection also includes his work covering the war in Vietnam and political campaigns in the 1960s and 1970s.

Reflecting in 2006 on the career his journalistic body of work documents, Wallace said, “My 40 years with CBS News have been a fascinating voyage of discovery. Thirty-seven years with ’60 Minutes’ have given me a chance to travel the globe, meet and report on world leaders, and broadcast what I’ve learned to an audience at home that had long trusted CBS News reporters like Walter Cronkite and Eric Severeid.”

Bentley Historical Library Director Francis X. Blouin explains the collection of papers is particularly significant in that it reconstructs the thinking behind groundbreaking television journalism.

“Wallace’s well-created interviews explored the gamut of major issues of our time,” Blouin says. “His body of work is truly of historic proportions.”

Wallace’s philanthropy at U-M transcended his specific career interests. He served in a variety of volunteer capacities, including as a member of the Depression Center’s National Advisory Board. He was one of the most prominent Americans to discuss his experience with depression publicly. The Mike Wallace Leadership Award was established in his name to recognize those who have demonstrated commitment, courage, support, and leadership to conquer depression, bipolar illness, and related illnesses.

“Mr. Wallace was a passionate advocate for openness, honesty, and forthrightness when discussing [depression] and related brain illnesses,” says John Greden, director of the Depression Center. “His voice was heard early in the fight, and he was uniquely powerful in perforating the national conspiracy of silence about mental illnesses. Mike’s legacy in so many ways is that he ‘helped show the way.’ We still have much to do to achieve the vision that we shared and we will continue to carry that torch.”

Wallace also contributed to the Department of Intercollegiate Athletics. The Michigan Marching Band honored him with a halftime program in 2006.

Wallace was born May 9, 1918, in Brookline, Mass., the son of Russian Jewish immigrants. He graduated from high school in 1935 and attended the University of Michigan at the encouragement of his uncle Isaiah Leo Sharfman, a longtime chair of the economics department. After graduation, Wallace began his radio broadcasting career in Grand Rapids and at Detroit’s WXYZ, where he did news casting and narrated “The Green Hornet.”

Wallace was hired by the Chicago Sun‘s radio station as a newscaster in 1941. He served as a naval communications officer during World War II and after the war worked as a reporter for radio station WMAQ-Chicago.

He joined CBS in 1951, left the network in 1955, and returned in 1963 when he was named a CBS News correspondent. He anchored “CBS Morning News” from 1963-66. CBS News executive producer Don Hewitt, with co-editors Mike Wallace and Harry Reasoner, launched the weekly news magazine “60 Minutes” in 1968.

Wallace was honored with the leading awards of the broadcast industry. He won the Fred Friendly First Amendment Award given by Quinnipiac College for his journalistic contributions to free speech in 2002. He was the recipient of the Robert F. Kennedy Journalism Award, 20 Emmy Awards, three Alfred I. DuPont-Columbia University Awards, three George Foster Peabody Awards, a Robert E. Sherwood Award, a Distinguished Achievement Award from the University of Southern California School of Journalism, and the Radio/Television News Directors Association (RTNDA) Paul White Award. He is an inductee of the Television Academy Hall of Fame, and was named Broadcaster of the Year by the International Radio and Television Society in 1993.

Wallace is the author of several books. Mike Wallace Asks, a compilation of interviews from “Night Beat” and “The Mike Wallace Interview” (1958); memoirs Close Encounter (1984) and Between You and Me (2005), co-authored with Gary Paul Gates; and Medal of Honor: Profiles of America’s Military Heroes from the Civil War to the Present, co-authored with Allen Mikaelian (2002).

This story was prepared by the Office of Public Affairs at the University of Michigan.