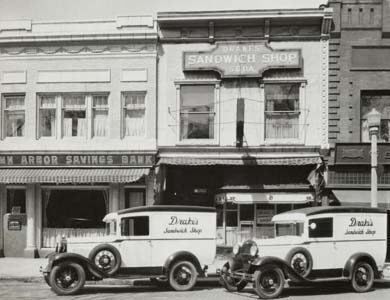 When Herbert Hoover was president of the United States, a young fellow named Truman Tibbals took a job washing dishes for 35 cents an hour at Drake’s Sandwich Shop, 709 N. University. He worked his way up to waiting tables, and after a while he bought the place from old Mr. Drake.

He made just one change. He took out the tables and installed high-walled booths. From that day until he sold the shop when Bill Clinton was president, Truman Tibbals left everything else pretty much the same, including the name over the candy-stripe awning in front. Through the Great Depression, World War II, the Baby Boom, the Beatles, Vietnam, Watergate, disco, and Reagan, Drake’s sold chocolate cordials, orange marmalade sandwiches, pecan rolls, and limeade (fresh-squeezed, with the rind in the glass) to three generations of University of Michigan students. They adored the place.

The walls were a milky, Depression-era green, like faded linoleum. Shelves held scores of glass jars filled with tea (Alfalfa Mint, Travencore, and Constant Comment among them) and even more of candy—jelly beans, candy corn, rum raisins, malted milk balls, cherry cordials, strawberry cordials, raspberry cordials, shelf above shelf. Candy went out the door in bags adorned in red and white stripes, like the awning outside.

The staff comprised Mr. Tibbals, Mrs. Tibbals, and a team of waitresses (plus the occasional waiter), many of whom appeared to be trained in the owners’ distinctly taciturn style of service. For people who dispensed small pleasures for a living, the Tibbalses made a gloomy pair. They were of opposite physical types, Mrs. Tibbals being massive and ponderous in her movements, Mr. Tibbals little and quick. They often could be seen perched on counter stools, well apart from each other, glowering at the wait staff. Students found them fearsome. But Mr. Tibbals was a pal of the Ann Arbor police, who often rolled in for breaks late at night. 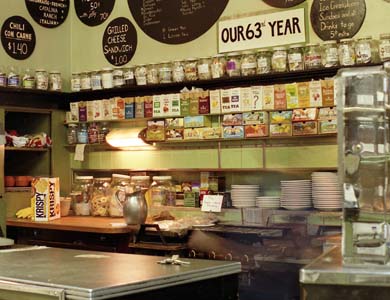 Diners wrote their own orders on small pads with tiny pencils. (Photo by Debra Drower.)

The Tibbalses did bring in the occasional new item. They served toasted bagels with cream cheese years before bagel franchises spread through the Midwest, and they were early providers of Gummi bears. In the ’40s Mr. Tibbals opened the room upstairs for records and dancing. First it was the Walnut Room, later the Martian Room, but in the shop’s last decades the stairs were closed and the only thing left of the Martian Room was the sign. For a time there was dancing downstairs, too, and a burger bar in the back. But the innovations always faded, and back the Tibbalses would go to the candy, the tea, the limeade, and the sandwiches.

When the Michigan Alumnus solicited memories of Drake’s from readers, a surprising number said they had dated their future spouses there. The privacy of the tall-walled booths fostered intimacy. The “Coke date,” a perennial getting-to-know-you ritual, was popular at Drake’s, which was located just steps from the Michigan and State theaters. One night in January 1969, Rick and Roberta London got engaged at the corner of South University and Washtenaw, then strolled across the Diag to mark the occasion at Drake’s.

“I will forever associate the small wooden benches, a toasted bagel, and cup of tea at Drake’s with the wonderful emotions of that day,” Roberta London remembered.

Another who wrote in was Ron Marabate, who—also in the late 1960s—would soothe his mind with a cinnamon roll on North U after rigorous German classes in the Frieze Building.”Drake’s was also memorable whenever I was joined there by a young lady,” he wrote, “especially the one who later became my wife. I don’t remember much of my Deutsch, but Drake’s is still vivid in my mind.”Mr. Tibbals died in 1993. The place was sold about the same time. Bagels are still a staple at 709 N. University today, but the name outside is Bruegger’s.