Earlier this year New York Mayor Michael Bloomberg proposed to legislate the sale of sodas and other sugar-sweetened drinks to 16 ounces or less. This controversial idea sparked much debate. It also shed light on the fact we are a nation suffering from “portion distortion.”

Today one in three Americans is overweight. Another third is obese, according to the Centers for Disease Control and Prevention. We can point to many reasons for this alarming trend, but one of the most obvious is an increase in what we define as the “average” portion size.

Take the following quiz to see if you can discern differences in today’s portion sizes of some common foods compared to 20 years ago. The answers at the end of the column also reveal just how much physical activity you will need to do to burn off all the extra calories we are consuming.

Why should we be concerned?

The latest studies on food consumption reveal startling facts that give insight to the worldwide epidemic of overfatness and type 2 diabetes. Americans consume more salt, sugar, and fat each year than any other nation in the world. On average we consume 86 pounds of fats and oils, 110 pounds of red meat (62 pounds of beef, 47 pounds of pork, 74 pounds of poultry, and 60 pounds of chicken), 33 pounds of eggs, 23 pounds of pizza, 24 pounds of ice cream, 24 pounds of artificial sweeteners, and 24 pounds of sodium. The figure below displays the amount of food consumed per pound for the average American in 2010. (See a full-sized version of the image below.) 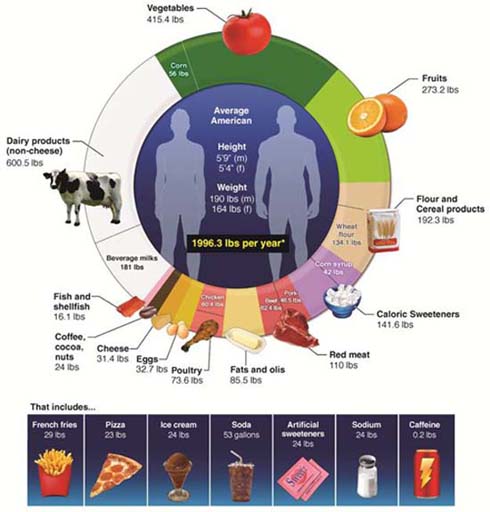 Epidemiologic evidence associates higher rates of salt, sugar, and fat consumption with higher rates of heart disease, type 2 diabetes, and overfatness. In 2010, no state had a prevalence of obesity less than 20 percent, and 12 states, including Michigan, had an obesity prevalence of 30 percent or more.

The problem with portions

Part of the increased food consumption relates to the nearly 350 percent increase, since 1965, in the proportion of foods we consume from restaurants and fast-food outlets. For the first time in our history, the average American eats out more than at home.

Supersized servings of french fries and soda often are two-to-five times larger than when first introduced. In 1955 a single serving of McDonald’s french fries weighed 2.4 ounces and contained 210 kcals. At the time, only one size—regular—was available. In 2012 McDonald’s offers three sizes: small—2.5 oz. at 224 kcal; medium—4.1 oz. at 370 kcal; and large—5.4 oz. at 487 kcal!

A medium popcorn and soda in a movie theater has the equivalent caloric content of three McDonald’s Quarter Pounders with 12 pats of butter!

Average portion sizes have expanded to such an extent over the past 20 years that the plate arrives with enough food for two, or even three, people. An “individual” bag of chips is enough for more than one person. And a bagel has become a BAGEL. These growing portion sizes are changing what Americans think of and expect as “normal.”

The increasing size of American food portions links to the U.S. food industry’s growing reliance on value marketing, a technique to increase profits. Customers are encouraged to spend a little extra money on a larger portion, thus getting a “better” deal.

The negative nutritional and caloric costs of these so-called deals is enormous. Upgrading to larger serving sizes often increases price only modestly, but substantially increases calorie and fat content. This invariably contributes to overeating (and probably overfatness).

In addition to using price to encourage the purchase of larger portion sizes, fast-food sales personnel often suggest consumers upgrade or “supersize” to larger portions or “value meals” that deliver high-profit-margin, high-calorie soft drinks and side dishes such as french fries. This bundling of items profoundly influences the quantity of food customers eat.

…When Eating at Home

…When Eating or Snacking in Front of the TV

And now for the answers…