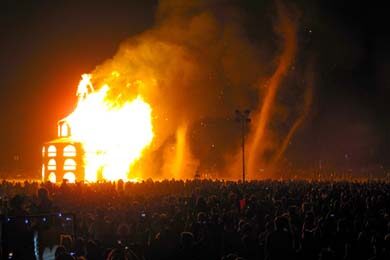 Wolverines thrive on creative oasis of art and generosity

Once a year in Nevada’s Black Rock Desert, a city appears on the playa. Like the icon at its center, it blazes with unimaginable intensity for a moment in time and then, just as quickly, disappears. It bills itself as an annual art event and temporary community based on radical expression and self-reliance. It is a place expressly committed to both decommodification and gifting. Thus sharing is encouraged; commerce is prohibited. Its population has grown to more than 50,000 inhabitants. It’s a place known as Burning Man. 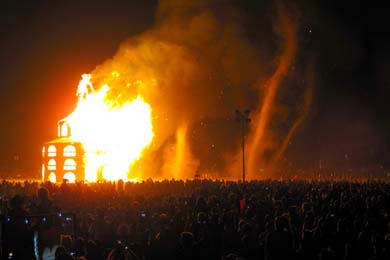 Citing various statistics about Burning Man is one thing. Describing what it’s like to be at Burning Man is considerably more difficult. As with any city of 50,000 people, there’s no single experience that typifies the event. In the same early morning hours, you might find one group quietly doing sunrise yoga while another continues an all-night techno dance party. Some burners drive in shiny new motorhomes, others pitch tents and sleeping bags, heavily anchored to keep them from blowing away in a dust storm.

Ask any “burners” in attendance what Burning Man is and you’re likely to hear what it is not.

Live music and DJs are everywhere, but it’s not a music festival. You won’t find a lineup of who’s playing what stage on the Burning Man website.

Enough art installations and decorated vehicles (dubbed art cars) populate the desert that the Black Rock Arts Foundation was established to support interactive, participatory art outside the event. But don’t call this an art festival. That conjures images of those tidy white booths that comprise the Ann Arbor Art Fairs. Here, art comes in the form of a fire-breathing steampunk metal octopus that rolls around the desert. It flames from an anti-corporate/political installation called Burn Wall Street that both entertains and demands reform.

There is, in fact, a “burning man” at Burning Man. The tradition of setting an effigy ablaze might have started with founder Larry Harvey getting over a relationship or a group of friends celebrating Solstice. Again, it all depends on who you ask. But one needn’t know the origin to know that the Man burns each year on the Saturday night of Labor Day Weekend. Since its first iteration on a San Francisco beach in 1986, Burning Man has grown to attract tens of thousands of revelers who annually convene for a week. The event culminates in cheering and dancing at a spectacular ceremonial bonfire so hot it throws off dozens of “dust devils,” tornado-like whirlwinds that skitter across the plain.

It’s all about the journey

The first time Amanda Sari Perez and her friends decided to make the pilgrimage to Nevada and experience Burning Man, they bought an old school bus to drive from Ann Arbor to the Black Rock Desert.

It was a bumpy ride. The bus died in Illinois and the campers were stranded. So they bought a second bus, which broke down every day. The group quickly learned the art of relying on the kindness of strangers, says Perez, a 2008 neuroscience grad now working as a research associate in neural engineering at U-M.

“We got a playa experience before we even got there,” she says.

But even with reliable transportation, it’s no small feat to get to the playa, as Burning Man’s locale in an ancient seabed is affectionately known. From Reno, Nev., to Gerlach, the little town where many burners acquire last-minute supplies, it’s about 100 miles, much of it on a two-lane winding road. Then it’s another dozen miles to the entrance of Burning Man, where traffic creeps over dusty, washboard lanes through ticket processing and vehicle inspection. Ultimately, greeters offer a warm “welcome home,” which might come with a hug from a partially naked stranger.

Perez and her friends have made that journey multiple times now, growing their camp well beyond the confines of a temperamental school bus, and learning key lessons along the way. This year she wrote four personal rules for Burning Man. One says: “Don’t wait for other people or the right circumstances or some other excuse to make things happen. Just do it and you will have a marvelous time with what you’ve got.”

One thing that sets Burning Man apart from most other festivals: You not only won’t find corporate sponsors, but the organization expressly forbids commerce. Burners bring everything they need, and share with others rather than selling. The only exceptions are ice vending, for reasons of survival in a desert in August, and a center camp coffee shop, perhaps a survival necessity for some.

As Burning Man has grown from a few dozen friends to more than 50,000 attendees, founder Harvey has tried to preserve the event’s culture by declaring 10 guiding principles that include self-expression, self-reliance, and civic responsibility.

I went to Burning Man for the first time for this story, having heard about it for years from friends, as well as through a growing mystique that led the parody newspaper The Onion to run a 2003 story headlined “No One Makes It To Burning Man Festival.” Stereotypes about Burning Man abound and I was curious how reality would align with reputation.

As the days unfolded, I quickly realized how challenging it would be to articulate this multifaceted, ever-changing thing that is Burning Man. When someone asks Megan Miller, the organization’s public relations manager, what Burning Man is, she replies, “Literally everyone you ask will have a different response to that.” But when it comes down to it, she says, participation itself is the core of the experience. 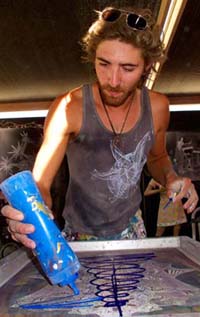 Katherine Chen, assistant professor of sociology at The City College of New York and the Graduate Center, The City University of New York, is the author of Enabling Creative Chaos, a book that explores the organization behind Burning Man. She even delivered a guest lecture about the topic at U-M’s Ross School of Business in 2010. As one of the first places to fully embrace and promote the term “co-creation” as a business principle, Ross was an ideal venue to discuss the unique organizational culture that informs Burning Man. Nearly everything—from the art to the newspaper, from the movie theater to the post office, and from the boutique offering playa gear to the construction of the Man himself—is created by participants and offered free of charge as a gift to the community.

Burning Man even has a recycling center because volunteers created it. It’s now run by Paul Schreer, formerly a staff member in U-M’s Office of Development. He began his experience as a volunteer and now is one of 45 full-time Burning Man staffers. Though he’s an employee, the recycling camp depends on the labor of volunteers, which is impressive given the conditions and the considerable distractions, says Schreer, known by the playa nickname Mr. Blue.

Large-scale generosity pervades the playa. After paying hundreds of dollars for a ticket, many Burning Man participants also invest time and money in actualizing elaborate projects onsite, from a supper club to a foot-washing spa. We camped with the musicians of MarchFourth Marching Band, who drove a firetruck to the desert from Portland, Ore., sharing their music all hours of the day and night.

And then there was former Ann Arbor resident Christopher Breedlove, who’d created 20 silk-screen designs with friends so he could gift people with wearable color and beauty on demand. My husband and I produced and distributed postcards for our part, encouraging the burners we encountered to express their thanks in writing to anyone back in what’s called “the default world.”

Organizational sociologists like Chen often study how organizations don’t support people enough or, conversely, how overly structured rules limit people. Since she started studying Burning Man in 1998, and after attending 14 times, she’s been impressed by the sense of responsibility participants have to be generous and to share with one another.

“It’s a really novel attempt at cultural creation.”—Michael McIntyre
Chen isn’t alone in looking at Burning Man as a laboratory of sorts. Mainstream business publications like Fast Company and Inc. have written about the leadership lessons found in the Burning Man culture. “Trusting that people on the front line might have good ideas and giving them the resources to get the job done,” Chen says, “is fundamental to Burning Man’s success.” 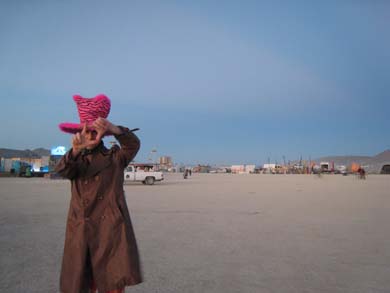 For example, for years the official way to find someone on the playa—where cell service and Internet connections are mostly nonexistent—was to leave a note on a bulletin board. Then participants built a computerized message database, which Burning Man folded into the Playa Info Tent, which is in turn staffed by volunteers like U-M alum Michael McIntyre. The 1995 nuclear engineering graduate is a software developer at the Population Studies Center. He went to Burning Man by himself in 2005 and immediately began working Playa Info, figuring that answering questions would be a good way to learn the place for himself.

He agrees with Miller that the participatory nature of Burning Man sets it apart from other festival experiences.

“It’s a really novel attempt at cultural creation,” McIntyre says. He has since gotten involved in the Great Lakes regional group that now puts on Lakes of Fire. This smaller-scale summer event in Rothbury, Mich., is governed by the principles of Burning Man.

Burning Man can transform people’s perceptions, says Chen. Its culture dictates that you don’t need to be professionally trained at something to try it. In addition, it allows you to immerse in the rewards of sharing knowledge or creativity.

“Carrying out a project they believe in can really open [people’s] eyes to possibility,” Chen says. “It’s a little like the genie is out of the bottle for people.”

Arin Fishkin, a 1991 fine arts alumna, says she often felt frustrated in her career making art people couldn’t relate to. Then she started cooking at the now-closed Del Rio Restaurant in Ann Arbor and had an epiphany: “I’m making something and people are enjoying it and I don’t have to explain it,” Fishkin says. 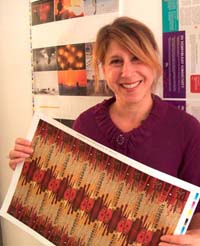 A few years after graduation, she had moved to the San Francisco Bay Area and started attending Burning Man. She keeps coming back because she enjoys seeing people with no art background helping put up a sculpture or assembling an art car. It’s liberating, she says, to watch others create art, not just consume it.

“The level of intimidation or pretension drops away,” Fishkin says.

She has since produced several graphic design projects for Burning Man, including the ticket and poster for the 2010 event. But until recently, she kept her affiliation with the festival quiet out of concern that her connection to the alternative community might turn off corporate clients. Then, she had another epiphany. Burning Man actually is a convenient screening device to determine a client’s compatibility with her—she wants to work with people who are creatively open, even if they aren’t actually burners.

Fishkin relishes her work with Burning Man. It challenges her to convey visually something that is literally beyond description.

“It’s one of those things you can’t explain until you’ve experienced it,” she says.