In the fall of 1965, a young University of Michigan student named Carl Smith sat in the last row of the second balcony at Hill Auditorium listening to, but not seeing very well, the Kingston Trio. 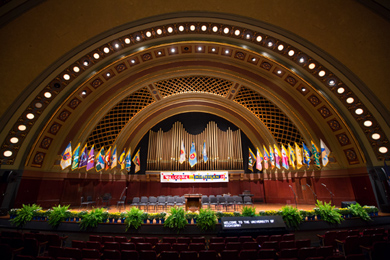 “The sound, oh the sound,” says the man who would go on to serve as faculty adviser to the Michigan Men’s Glee Club for 15 years. “It seemed as though they were playing just to me.”

Smith’s testimonial would have been music to the ears of noted architect Albert Kahn. When Kahn set about designing Hill Auditorium more than 100 years ago, he was intent on creating a space for music lovers just like Smith. The architect wanted to accommodate 5,000 people who could hear each and every note from each and every seat. His goal, according to a story told to granddaughter Carol Rose Kahn by her father, the late neurosurgeon Edgar “Eddie” Kahn, MD ’24, was to hear a pin drop on the stage while seated in the upper tiers of the balcony. Albert Kahn found the ideal partner in groundbreaking acoustics expert Hugh Tallant; he looked to the megaphone as inspiration for the shape of Hill’s sonically superior interior.

“Hill Auditorium was nearly finished when I was 14, or so, and my father and I went out to Ann Arbor,” Eddie Kahn said in an oral history Carol Rose Kahn recorded in 1978 while studying at U-M. She posted Eddie’s story on a U-M website celebrating Hill’s most recent renovation a decade ago. As Eddie told Carol, “Father stood up in the last seat of the second balcony, and I went down on the stage. On my word of honor, I dropped a pin and he heard it.”

Perhaps this explains why so many people have such wonderful memories of their experiences in Hill, whether they’ve come to hear a world-class symphony or a four-piece garage band, an a cappella chorale or a jazz ensemble.

It all began on May 14, 1913, the first night of many “nights to remember” at Hill Auditorium.

On that spring evening at the dawn of the 20th century, the Chicago Symphony performed a program of music by Wagner, Beethoven, and Brahms. In the second half of the concert, the University of Michigan Choral Union presented an original musical work composed by the director of the School of Music.

That blend of honoring an artistic tradition and presenting contemporary creative works is the distinguishing mark of one of the most well-known and remarkable icons on the University of Michigan campus—a place, cited by cultural enthusiasts, as the “other” Big House.

The best of us

“Hill Auditorium speaks to the quality and the standards that we expect in our performances,” says Kenneth Kiesler, director of university orchestras and professor of conducting. “It distinguishes our school from any other school in the world. Very few, if any, have a hall as magnificent as Hill. It requires the best of us.”

Nearly 100 years after that inaugural concert, Hill Auditorium still occupies an indelible place in the memories of U-M students, alumni, faculty, staff, and visitors. But it is the performers—especially members of the University glee clubs, chorals, and symphony bands—who seem most touched by the opportunity to share such an awe-inspiring space with their idols.

Kingston Trio fan Smith, now a retired CPA who worked in the Office of University Audits for a little more than 27 years, performed with the University Choral Union nearly the entire time he worked at Michigan. “Hill holds a very special place in my heart,” he says. “I get a thrill every time I step on the stage to perform or when I sit in the audience.”

Women’s Glee Club performer Wendy (Westover) Christensen, BS ’98, agrees. “The greatest rush I felt in the grand venue was walking on stage and performing,” she recalled in an online post at the time of the 2002-04 Hill renovation. “The auditorium is just electric. Every performance was a new and wonderful experience.”

Hill left a similarly profound impression on budding music lover Justin McCudden. He attended St. Thomas High School in Ann Arbor from 1942-46. “From one of the top rows of the balcony I would listen to Fritz Kreisler, Lily Pons, Vladimir Horowitz, Marian Anderson, the blind pianist Alec Templeton, the Don Cossacks Russian Chorus, and many others,” he reminisced online. “In my last two years of high school I was able to join the University chorus for its annual performance of ‘Messiah’ and its appearance at the May Festival. Singing Beethoven’s ‘Ode to Joy’ with the chorus, conducted by Eugene Ormandy before a packed auditorium, was an extraordinary experience for a teenager.”

When Hill was first renovated in 1949, the original wooden seats were replaced with blue velour seats with maize armrests.

The U-M School of Music, Theatre & Dance (SMTD), which presents dozens of student concerts at Hill each year, will mark the centennial with its annual “Collage” concert on Saturday, Jan. 19, 2013.

The most recent renovations at Hill began in 2002 and cost more than $38 million.

Meanwhile, the University Musical Society (UMS) has dedicated its current season, which kicked off in September, to the special bond it shares with Hill Auditorium. From now through April 2013, UMS is presenting internationally renowned artists from the worlds of classical music, theater, dance, and jazz. A forthcoming highlight is the April 4 performance of Darius Milhaud’s mammoth and rarely performed “Oresteian Trilogy,” featuring the University Symphony Orchestra and a 350-voice choir. The concert will bring SMTD together with UMS for a powerful celebration of Hill’s centenary.

Thanks for the Memories

Walking up the steps and down the aisles of Hill Auditorium is an inspiring journey through the pages of cultural and campus history. The venue is listed on the National Register of Historic Places and is named for Arthur Hill, who graduated from the University in 1865 with a degree in civil engineering. He joined the Board of Regents in 1901 and bequeathed to the University an unsolicited gift of $200,000 to construct an auditorium on the Ann Arbor campus. 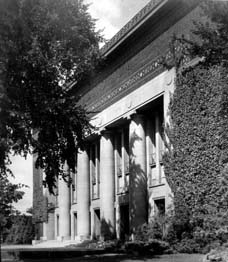 At the time of its dedication U-M President Emeritus James Angell declared, “Long may it endure as the gathering place of the many friends of the University on great festival days and as the memorial of one of her most generous and devoted sons.”

Ask any Michigan alumnus and you are likely to hear a story like the one Jeff Rautiola, BSEE ’82, shared online: “My fondest memories include shaking Ella Fitzgerald’s hand at the end of her concert, being close enough to Oscar Peterson to hear him vocalize along with his improvisation, hearing a live duet with Chick Corea and Herbie Hancock, and watching Johnny Griffin and Dexter Gordon ‘trade fours.'”

Charlotte Robinson, BA ’95, saw Allen Ginsberg, Jim Carroll, and Patti Smith read poetry on the Hill Auditorium stage. “I’ll never forget how vulnerable yet hopeful Ms. Smith seemed, not long after the death of her husband, as she broke from her reading to launch into a tear-jerking version of the song ‘The Twelfth of Never’ in his honor.”

Today, as the University embarks on a series of events designed to celebrate the centennial in 2013, fans are reminded that Hill isn’t merely an auditorium. It’s a way of deepening one’s appreciation of culture and the many differences that define the great range of artistic expression. For Mark Powell, founder of the American Radio Chamber Orchestra, Hill is never far from his heart, no matter where he is making music: “At any hall in which I have conducted since my time at Michigan, even the Concertgebouw, I look out from the stage and see that arching ceiling in my mind’s eye.”