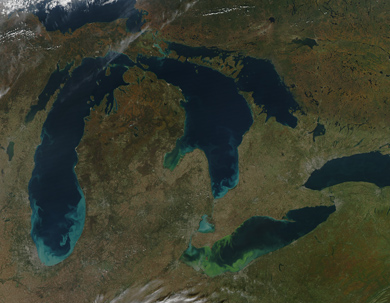 Climate change is expected to increase the frequency of intense spring rain storms in the Great Lakes region throughout this century and will likely add to the number of harmful algal blooms and “dead zones” in Lake Erie, unless additional conservation actions are taken, says aquatic ecologist Donald Scavia. Climate models suggest the number of intense spring rain storms in the region could double by the end of the century, contributing to an overall 30 to 40 percent increase in spring precipitation, Scavia says. He is director of the Graham Sustainability Institute at the University. That increase, combined with the greater availability of phosphorous due to current agricultural practices in the Midwest, means increased amounts of the nutrient will be scoured from farmlands and run into rivers that feed Lake Erie, fueling algae blooms and low-oxygen dead zones where most aquatic organisms cannot survive.”Climate change is likely to make reducing phosphorous loads even more difficult in the future than it is now, which will likely lead to even more toxic algae blooms and larger dead zones unless more conservation is undertaken,” says Scavia.The agricultural practices that contribute to increased availability of phosphorous from fertilizer include no-till farming, a method of planting crops without plowing. The technique reduces soil erosion but also leaves “high concentrations of phosphorous in the upper surface soil, and these intense storms appear to be flushing it out,” Scavia says.The widespread adoption of no-till farming and other agricultural techniques since the mid-1990s have had some positive effects but also appear to have increased the availability of the type of phosphorous, known as soluble reactive phosphorous, that promotes algae blooms, Scavia says.Since the mid-1990s, intense spring rain storms also have become more common in the Great Lakes region, especially in southeast Michigan and northwest Ohio, the regions that provide runoff into Lake Erie, Scavia says.Current agricultural best management practices—such as planting buffer strips around cropland, protecting wetlands, and using less fertilizer—applied at the current scales are likely “not going to be sufficient to reduce the phosphorous loads to the levels we need to prevent the blooms and to get rid of the dead zones,” Scavia says.In the late 1960s, 1970s, and early 1980s, control strategies focused on reducing phosphorous from specific sources, such as waste-treatment plants. Reductions from those so-called point sources led to major gains in Great Lakes health, including a drop in the frequency and extent of harmful algae blooms and dead zones.Some of those gains have been reversed since the mid-1990s. The increased availability of soluble reactive phosphorous and a surge in extreme rainfall events in the region have contributed to a resurgence of both harmful algal blooms and dead zones in Lake Erie, Scavia says.Algae blooms can foul harbors, clog boat motors, reduce fish populations, and can sometimes be toxic to humans.