“Michigan never gave up on me.” —Dr. Billy Taylor

The recent release of PERSEVERANCE: The Story of Dr. Billy Taylor about the rise and fall—and rise again—of the University of Michigan running back (1969-71) brings to mind two other films about iconic athletes and Michigan.

The first, Harmon of Michigan, is a Hollywood feature released in 1941, starring Tom Harmon, the great 1930s-’40s All-American running back and Michigan’s first Heisman Trophy winner. The second, The Life and Times of Hank Greenberg (1999), is a much-honored feature-length documentary written, produced, and directed by University of Michigan alum Aviva Kempner. It details the life and career of baseball’s first Jewish superstar, arguably one of the sport’s “greatest sluggers.”

Of the three films, Harmon Of Michigan is the most unusual. Conceptualized by Columbia Pictures, the film was the first of a series in which athletic icons would play the lead roles in fictional stories. As plotted by screenwriter Howard J. Green, Tom Harmon—”Tommy” in the film—is about to graduate from Michigan. Fellow students (including a very young Lloyd Bridges) urge him to turn pro. In opening the film, an on-screen narrator (who appears to be seated in a Michigan Union lounge) recounts Harmon’s remarkable achievements as #98 on the football field. Newsreel footage from Michigan’s 1940 season is intercut to highlight Harmon’s athletic prowess. 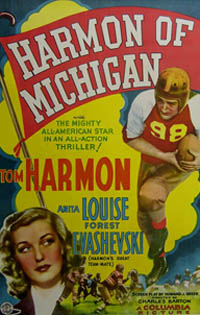 In this fictional tale—the real Harmon having been accounted for—Tommy chooses college coaching over a professional career, first as a short-lived assistant coach, then as head coach for a school whose alumni board members urge a win-at-all-costs strategy. The plot thickens when Harmon revives a banned and dangerous formation: the “flying wedge” play. The tactic is to be used in defeating all the school’s opponents, including the team coached by Tommy’s mentor, “Pop” Branch (Oscar O’Shea). In time everyone except the alumni board implores Harmon to drop the play. In a surprising turn of less-than-idealistic characterization, Tommy vehemently refuses to back down until his quarterback is severely injured while executing the formation.

Guilty and regretful for his mistake, Tommy resigns. Downtrodden, he seeks out Pop Branch and offers himself up as a lowly assistant. In the meantime, Tommy marries his college sweetheart, Peggy Adams (Anita Louise), who serves as the central catalyst to rehabilitate his character. As a footnote: Harmon’s outstanding teammate Forest Evashevski appears in the film when he and the Tommy character play briefly for a team called the All Stars.

What always surprises me on seeing Harmon of Michigan is how natural the athlete-turned-actor appears in front of the camera. Perhaps part of that was due to his majors in speech and English at Michigan. Harmon went on to appear in a number of other sports films in the ’40s and ’50s, and members of his family, most notably son Mark Harmon of “NCIS” fame, also pursued acting careers.

Aviva Kempner’s The Life and Times of Hank Greenberg is a multi-themed study of the great Detroit Tigers batting champion and Hall of Famer who played for the Tigers from 1933-47 (save a four-year hiatus for military service during World War II). The film details Greenberg’s personal and professional work ethics at a time when baseball was only beginning to address diversity in its ranks. Greenberg often endured anti-Semitic taunts by fans and opposing players, and he generated tremendous controversy in 1934 when he announced he would not play on the days of Rosh Hashanah and Yom Kippur that year. Reluctantly, Greenberg relented on Rosh Hashanah and hit two home runs in a win that would help propel the Tigers into the World Series—their first in a quarter of a century. The athlete, however, still refused to play on Yom Kippur.

Kempner’s treatment of Greenberg’s life includes thrilling newsreel footage of Tiger games, intermingled with interviews of baseball contemporaries and public figures whose commentaries elaborate on the athlete’s place in baseball history. It’s a wonderful, inspiring sports documentary. During his career “Hammering Hank,” as he was known, hit 331 home runs and had 1,276 RBIs.

That brings me to PERSEVERANCE: The Story of Dr. Billy Taylor (2012), a powerful documentary about the ups and downs of the three-time University of Michigan All-American whose football career coincided with the arrival at Michigan of head coach Bo Schembechler. Coincidentally, Schembechler and Taylor were both from Barberton, Ohio. This deeply moving documentary was first screened Nov. 16 at Ann Arbor’s Michigan Theater. The audience gave it a standing ovation, and rightly so. 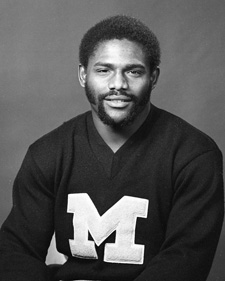 Billy Taylor during his glory days as a proud Wolverine.

Taylor’s story might be described as a riches-to-rags-to-rebound tale as it follows the athlete from the cheers of Michigan Stadium to destitute homelessness on the streets of Detroit. What makes Taylor’s journey so engaging is its very personal framing via the voice-over narration of Ann Arbor-raised Michigan alumnus Dan Chace. Chace is soft-spoken and pointed as he recounts how, as an eight-year-old, he met Taylor after the football star gave a talk at his elementary school. Chace was so inspired he “adopted” Taylor as his hero.

The narrator opens the film with the question: “What makes a hero?” That question serves as a perfect double-edged arc as it leads into newsreel footage and archival photos that highlight Taylor’s Big House career—one in which he broke the aforementioned Harmon’s record for team rushing, and where, under Schembechler from 1969-71, he helped relaunch Michigan as a football powerhouse.

What soon follows is the other side of the hero arc. After a series of personal and professional losses Taylor descended into a world of depression and self-medication through alcohol and drugs. Then in 1975 he was convicted and imprisoned for attempted robbery. Chace, who was 14 at the time, remembers in his narration how shocked and frightened he was by the criminal incident. His hero had failed him.

Taylor’s comeback serves as the heart and soul of PERSEVERANCE as his next triumph is revealed. It begins in 1997 when, sitting outside an abandoned house and drinking vodka, a mysterious voice calls out, “William Taylor, come forth.” The former athlete says he was so frightened he ran frantically through the streets of Detroit to the home of Sheryl Carson, a woman for whom he performed odd jobs over the years. Taylor confesses his past 25 years to Carson and says that at that moment “I decided to reclaim my life … to get back up. [Carson] believed in me when I didn’t believe in myself.”

I won’t reveal the remarkable details of Taylor’s inspiring rebound except to say that after working as a counselor with Carson’s organization, he went on to earn a doctorate in educational leadership at the University of Nevada, Las Vegas. He returned to Detroit and founded Get Back Up Inc., a rehab center where he counsels others and shares the value of perseverance. 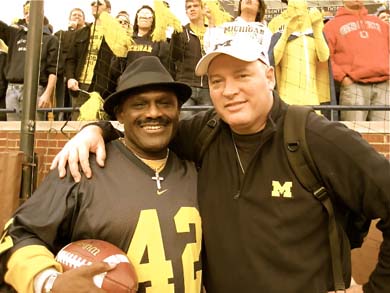 One has to see PERSEVERANCE: The Story Of Dr. Billy Taylor to fully appreciate the larger wonders and importance of this documentary. A marvelous array of characters figures into the story: members of Taylor’s family; coaches on the order of Woody Hayes, Bo Schembechler, Jerry Hanlon, and Gary Moeller; and fellow teammates Don Moorhead, Thom Darden, Henry Hill, and David Brandon—now Michigan’s director of athletics. Tom Ufer (son of legendary Michigan radio announcer Bob Ufer) also appears, as does sports commentator John U. Bacon.

There’s a wealth of heartfelt emotion in this film, which was co-directed by U-M alumni Chace and Bob Hercules. It was a re-inspired Chace who felt the need to tell the full story of Dr. Billy Taylor. Visit www.perseverancefilm.com for more information about the making of the documentary. The DVD also offers a short film titled Vintage Bo, which follows Schembechler, his team (including Taylor), and family in the week leading up to a 1971 home game against Iowa. DVDs of PERSEVERANCE are available for purchase in Ann Arbor at M Den stores, or online at www.mden.com.

Related: The Late Great 98: Tom Harmon on the Field and at War