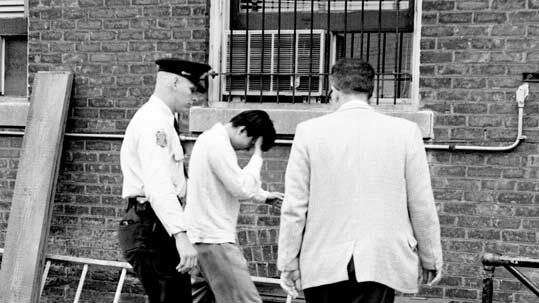 Four years in an attic: The strange exile of David Lim

The First Methodist Church of Ann Arbor had a ghost.

At least that’s what some people thought. Those less inclined to fancy thought it might be a prowler. Late at night the faint sound of footsteps seemed to come from the building’s upper levels. In the early morning hours doors could be heard softly closing. Food went missing from the kitchen. In the library, books were disturbed and magazines and newspapers disappeared. 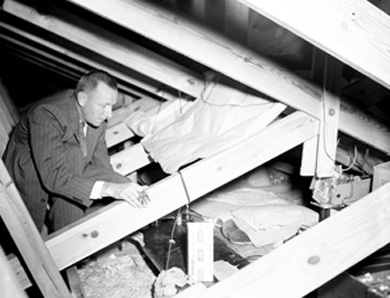 An attic hideaway above Ann Arbor’s First Methodist Church served as the secret home of a troubled U-M student who disappeared in 1955. Rev. Eugene Ransom was shocked to learn the young man had been living there all along. (Image courtesy of the Ann Arbor District Library archive.)

The mysterious incidents continued off and on for nearly two years until one morning the church secretary came in early to catch up on work and was surprised by a strange man. She screamed and ran. So did he. A thorough search of the building by six police officers found nothing.

A security guard soon joined the church staff. About three months later, while making his rounds in the early morning hours of Aug. 30, 1959, the guard heard footsteps. Police were again summoned.

This time they found something.

“I opened up a closet door—it was a mop closet where they stored buckets and mops and so forth—and I looked up, and there was a trapdoor at the top,” remembers Norm Olmstead, one of the patrolmen who responded to the call. “I could see a hand closing the trapdoor.”

Olmstead and his partner, Ritchie Davis, climbed the ladder and pushed through the trapdoor into the cool night air, then crossed a flat section of the roof to an A-frame loft built over the student lounge. After sending for a janitor to unlock the door, the officers advanced cautiously into the inky darkness of the windowless attic, the stark beams of their flashlights revealing the strangest scene the two ever would encounter in their long careers in law enforcement.

One corner of the room had been converted into a primitive living space—a bed made of seat cushions, a lamp, a radio, books, magazines, some jars, and food containers.

To the other side, crouched fearfully in a recess under the framework, was the attic’s occupant. Not a ghost, but a man—a wild man—dirty and dressed only in a tattered pair of shorts, his long, matted hair sticking out like straw from beneath a brimless skull cap. He surrendered without resistance and was taken away in handcuffs for questioning.

That’s when things really started to get weird. 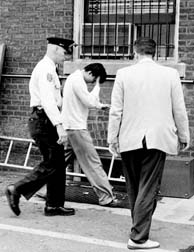 Lim was finally out of the attic—but now found himself in police custody. (Image courtesy of the Ann Arbor District Library archive.)

Freshly scrubbed and wearing a borrowed set of clothes, the wild man from the attic told police interrogators an incredible tale that would soon make headlines around the world. His name was Chheng Guan Lim—David Lim to friends—and he was 28 years old. He had come to the United States from Singapore on a student visa in 1951 under the sponsorship of the First Methodist Church. He first attended Albion College and a year later transferred to the University of Michigan to study engineering.

Unfortunately engineering wasn’t Lim’s forte. His marks began to fall and by 1954 he was on academic probation. He wanted to transfer to liberal arts but his grades were too low. He was also out of money. Afraid of the humiliation his failure would bring to his family, afraid of disappointing his sponsors and the friends who had helped him financially, he quit school and started hiding out in secluded places around town: the railway station, the Arboretum, and ultimately the First Methodist Church, where he had worked as a janitor.

Lim spent more and more of his time concealed inside the church, keeping away from those who might know of his disgrace, venturing out only for football games (he was a big Michigan fan). Finally, on Sunday, Oct. 9, 1955, the day after the Wolverines trounced Army, 26-2, he returned to the stately brick edifice at the corner of State and Washington that had now become his secret home.

He did not come out again for the next four years.

Lim evolved into a self-imposed castaway, a modern-day Robinson Crusoe stranded in the middle of a bustling college town, imprisoned not by miles of ocean but by two immensely powerful emotions: shame and fear. His days were spent lying quietly in the primitive quarters he had fashioned in the church rafters, terrified to move for being heard. At night he would descend and tiptoe through the sprawling building’s empty rooms, looking for food. Luckily, the frequent pot-luck dinners held by the ladies auxiliary provided ample leftovers. (In fact, upon his capture Lim was 10 pounds heavier than he had been before he went into hiding.) 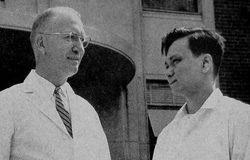 As the months passed the young man embellished his living space with items pilfered during his nocturnal prowls. Pew cushions became his bed. He made a tent out of blankets and hooked up a 200-watt light to provide warmth during the frigid winters. In the stifling heat of summer he scavenged ice cubes and kept cool with homemade paper fans. An earphone radio supplied his only link with humanity.

“I listened to three or four newscasts a day and rooted for Michigan during the football season and against the Tigers during the baseball season,” he explained upon discovery. “The Tigers annoyed me because of their optimism. Each spring they said this was the year, but it never was.”

Like Crusoe, Lim became ingeniously self-sufficient. He brushed his teeth with the ends of kitchen matches, using baking soda as toothpaste. He learned to cut his own hair. He shaved, after a fashion, with two pennies clamped together like tweezers. He bathed in the bathroom sink, and built a small pair of wooden stilts that he attached to his feet with string to keep the snow out of his ragged tennis shoes.

He stayed in physical shape jumping rope in the lounge. To maintain his sanity he would sometimes shut himself in a soundproofed closet and sing and scream at the top of his lungs. But after nearly four years the strain was becoming too much. In all that time Lim hadn’t spoken to a single soul. “It was like death,” he told authorities. “I talked to myself more and more.”

Undoubtedly some part of him wanted to be found. He grew careless, even reckless. As the police searched for him on the night he was captured, he stood behind each door and waited for them to approach before continuing his flight. When finally confronted by the officers and their drawn guns, he was flooded with an overwhelming mix of fear and relief. “I feel half happy and half crying inside,” he said. 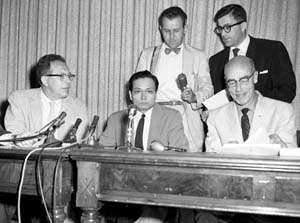 Lim attempted to explain his bizarre behavior during a press conference. (Image courtesy of the Ann Arbor District Library archive.)

On the morning of Aug. 31, a mere 24 hours after his discovery, Lim held a press conference for 30 newsmen at City Hall, where he answered questions in a quiet, halting voice. He had just learned his father had died of cancer some months earlier. He expressed a desire to return to the University if allowed. His story made the front page of The New York Times and hundreds of other papers around the world.

Lim spent the next few weeks recuperating at the home of Eugene Ransom, director of the Methodist ministry at the University and a close friend since before the young man’s disappearance. Jim Ransom, nine years old at the time and third of the Rev. and Mrs. Ransom’s five children, remembers being puzzled when told that Lim had vanished. “I have this vision in my head of seeing somebody walking down the sidewalk and then disappearing. It sort of felt like that, and I’m sure it felt like that to Mom and Dad.”

Ransom also has a clear memory of the day Lim was discovered. “I think I was in the first floor bedroom of our house on Granger Street, and I came out and Mom and Dad were both sitting by the phone. They had just hung up and I could see that something really shocking had happened. They told me that our lost student had been found in the attic. Dad was concerned because he had told the police he wanted to kill himself.” 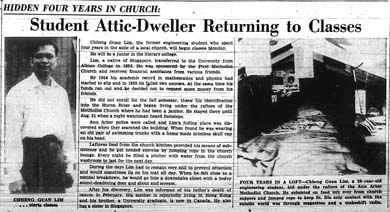 Lim’s strange tale was reported in the local, national, and international press.

If Lim was possessed of any such dire notions they were soon dispelled. His return to society was accomplished quickly and with remarkable ease. Doctors pronounced him in excellent health. The police pressed no charges. Sympathetic immigration officials granted him a new visa. The University approved his transfer to liberal arts, and a scant three weeks after being found he was back in class. Money was no longer an issue. Offers of financial assistance poured in from all over the country, and the church unhesitatingly renewed its support.

Far from being harmed by his four-year ordeal, Lim seems in some ways to have been the better for it.

After graduating with a degree in history in 1961 he returned to Singapore, where he disappeared again—this time into obscurity. He took an administrative job with a steel company and settled comfortably into an uneventful life of self-effacing bachelorhood. His name doesn’t resurface until 1986, when he died of a heart attack at age 55. Lim’s premature passage aroused little interest in the press, apart from a story in The Ann Arbor News and a few lines of condolence in a Singaporean newspaper. A photo accompanying the consolatory note shows a man who looked little different than he had 30 years earlier.

If in the future things are heard going bump in the night at the First United Methodist Church, you can bet it won’t be the ghost of David Lim. Once was more than enough.