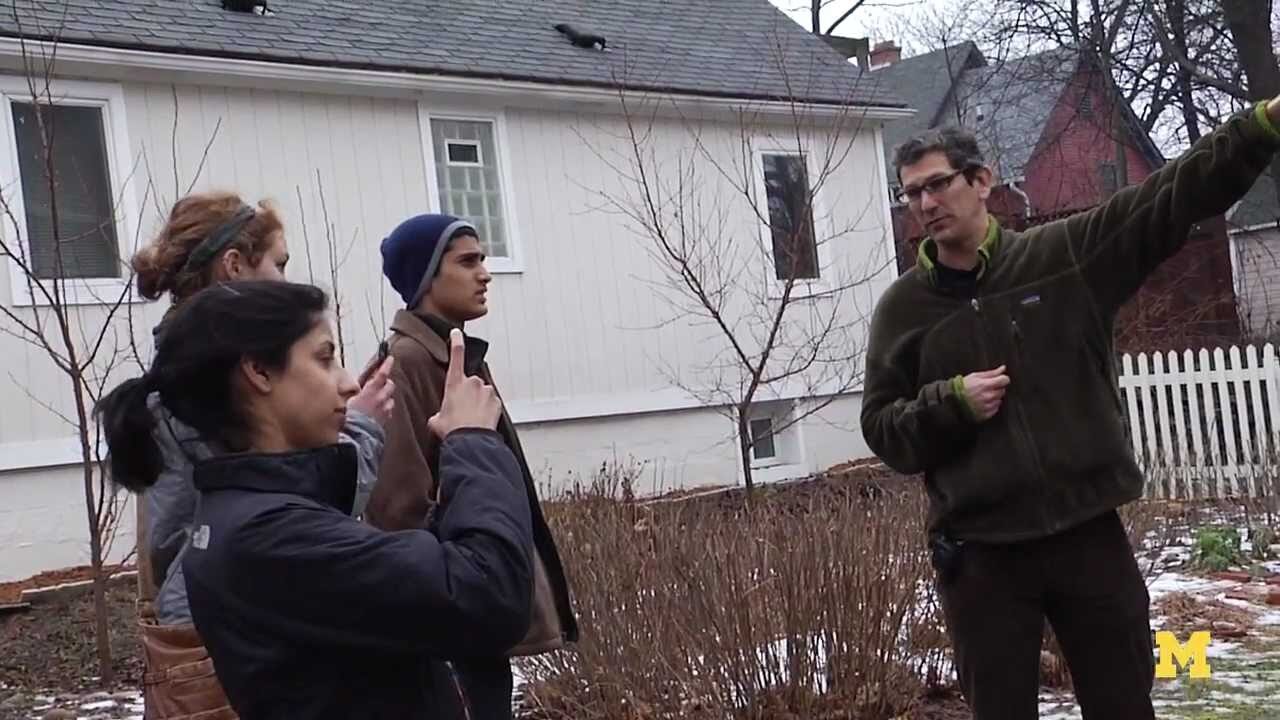 Imagine if your home had walls filled with water, toilets that composted their own waste, and a roof that was capable of disinfecting water through the sun’s UV rays. This vision may become a reality for one Ann Arbor home, as a group of Michigan Engineering students work to retrofit a 100-year-old Victorian to capture and treat its own water.

The home belongs to the Grocoff family, and is an unassuming structure in the heart of the town’s “Old West Side.” It has already achieved recognition as one of the country’s first Net Zero Energy homes—meaning the house produces more energy through the use of solar panels and geothermal than it consumes.

Now, owner Matt Grocoff and the team of engineering students hope to accomplish that same feat with water—something that, to their knowledge, has never been done on this type of structure. Their goal is to capture and treat enough rainwater on site to supply the house with clean drinking water, then find creative solutions for recycling or reusing waste water for cleaning or irrigation.

“The funny thing is this house was net-zero water when it was built,” says Grocoff. “They captured water in cisterns, used water from wells for drinking, and used an outhouse for natural sewage. Now, I don’t advocate going back to the outhouse, but let’s use those natural ideas to make new solutions.”

Grocoff is a Net Zero Energy consultant and creator of GreenovationTV.com. He and the team from Better Living Using Engineering Laboratory (BLUElab), a student-run organization, will spend the coming months brainstorming, prototyping, and testing several design options that could achieve the goal of net-zero water consumption.

“I’m so excited to be working with the team on this, because this challenge is so big that no one person could accomplish it on their own,” he says.

The students began their journey on an appropriately rainy day in February, as they toured the home in stockinged feet. After the tour, about a dozen engineering students listened as Grocoff, his feet decked out in striped socks and tucked underneath him on the couch, passionately explained his journey to Net Zero Energy conversion—and his hope to accomplish the same thing with water.

“Net Zero Energy is easy,” says Grocoff. “Now the real challenge is water. The largest expense after street lighting in most municipalities throughout the country is sewers and water treatment.”

The venture kicks off as the city of Ann Arbor undertakes one of the largest capital improvement projects in its history—a complete rebuild of half the city’s wastewater treatment plant at a pricetag of $120 million dollars.

“We take highly treated water and use it for many reasons—we drink it, we clean with it, we even pee into it. Then we dump it all back into one pipe,” says Grocoff. “The question is, can we re-think this system?”

According to the Environmental Protection Agency, American residents use about 100 gallons of clean, drinkable water per person each day. But only about 15 gallons of that is used for cooking, drinking, or brushing our teeth. The vast majority of water—almost half—is used by flushing the toilet and showering.

“When people think about sustainability, they like to think about the future,” says Steven Skerlos, an Arthur F. Thurnau professor of mechanical engineering and faculty adviser for BLUElab. “But water shortage is not a future problem. It’s happening right now.”

The effort to increase consumer awareness about consumption and conservation has been going on for years, but actively retrofitting existing homes to create their own usable water is a relatively new undertaking.

“I’m very passionate about sustainable retrofitting because it’s important for us to live within our means on this planet. And it’s also just such a challenging project—what do we do with the 130 million U.S. homes that are already here?” says Devki Desai, a doctoral student in civil engineering and team leader of the project.

The team hopes to retrofit the home to ultimately qualify for certification in the Living Building Challenge. Challenges such as these are prompting builders to consider green solutions for new projects, but the average American home is being left behind, says Grocoff, who believes what’s so unique about his home is that it’s so ordinary.

“What would be the point of living if we built a bunch of hyper-efficient concrete boxes? We need to preserve the beauty and history of what’s already here,” he says.

The aesthetics and historic preservation of the structure will be a major consideration in the solutions the team chooses to implement, says Desai. Other considerations and obstacles include the life cycle and reliability of the systems, the materials used to create them, practicality of implementation, regulatory restrictions, and cost.

The challenge is in accomplishing a solution for all aspects of water use in a home, including the capture, purification, and storage of rainwater into clean drinking water, treatment of grey and waste water for re-use elsewhere, and lowering consumption overall. Even more challenging is that no one solution fits all.

“You cannot retrofit a home in Ann Arbor, and then expect to pick that up and drop it into Phoenix,” says Grocoff. “Just like nature, you have to have many solutions to the same problem.”

To reduce consumption, the team will be implementing aerators and high-efficiency appliances. For rainwater capture, they’d like to improve the materials used on the roof and increase the size of the home’s gutters, then store that water in a large, underground cistern. Purification solutions are still wide open, with carbon, sand, ceramic, and solar disinfection on the roof or walls among the many options. And treatment or removal of grey and waste water for irrigation or cleaning purposes is still in the beginning stages. Compostable toilets are a viable option, but have to pass the “will-my-wife-say-it’s-OK?” test first, Grocoff says.

Desai says the students will spend the semester researching and evaluating solutions, then create test versions at U-M’s Wilson Center over the summer for proof of concept. The process may take more than a year to accomplish, but the students are looking forward to the challenge.

“I’m really excited,” says civil engineering undergrad Sarah Washabaugh. “It’s interesting to have so many different types of engineers on the team and that we could be working on a real-world project like this. I can’t wait to see what kind of solutions we come up with.”

This story originally appeared at the College of Engineering website.