How one Michigan Grad is Protecting the Wolverine

It’s good to be a wolverine right now. Especially when you have friends in the U.S. Fish and Wildlife Service (USFWS) focused on endangered species issues. If all goes well, you may get a new home in Colorado, a mate, and the opportunity to start a family. 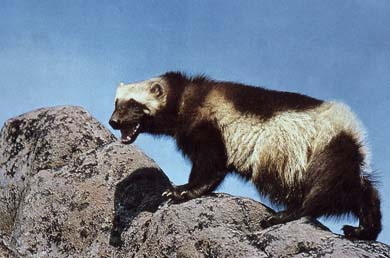 That’s the plan for North America’s small but mighty wolverine population, according to Bridget Fahey, MS’ 97. She is the endangered species chief in the USFWS for the mountain prairie region. Fahey recently project managed a proposal to classify the North American wolverine as “threatened” under the Endangered Species Act. The classification would offer protection and intervention to this largest terrestrial member of the family Mustelidae.

“As a biologist, I find the wolverine to be an inspiring species in a lot of ways,” Fahey says. “It has a reputation for being fierce and tenacious, and it has already made a remarkable comeback since nearly going extinct in the early 1900s. I can’t say whether my love of the wolverine predates my time at Michigan, but I definitely have an interest in the species, which probably could be attributed to Michigan.”

The wolverine population is, by nature, rare. There are an estimated 250-300 wolverines in the lower 48 states today. They occur at low densities, are slow to reproduce, and tend to be solitary. They generally live in remote locations above the treeline and favor rugged conditions inhospitable to humans. Today most can be found in the western mountains of Alaska and Canada. As for the lower 48 states, the majority live in the North Cascades in Washington and the Northern Rocky Mountains in Idaho, Montana, Oregon (Wallowa Range), and Wyoming.

At the start of the 20th century the wolverine suffered collateral damage from large-scale predator removal campaigns targeting bears, mountain lions, and wolves. Since then most states have enacted laws to prohibit hunting or trapping the wolverine, and, as a result, the species has increased its numbers slowly but surely over the past century. 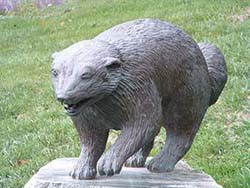 The Wolverine statue on North Campus by Dan Heikkinen.

Unfortunately, U-M’s mighty mascot is threatened by a more pernicious enemy today: climate change. The wolverine requires a vast and deep snowpack that persists through May. Trends indicate that climate warming in the lower 48 during the 21st century is likely to reduce the species’ habitat to the point where its very persistence is in doubt. Without intervention, researchers estimate the population will decline 31 percent by 2045, and 63 percent by 2085.

Time for an Intervention

But it’s not all doom and gloom and the trend can be reversed, Fahey says. To be “threatened” is better than “endangered.” It means there is still time for effective intervention. Plus, regulations that come with that intervention (limitations on the timber industry and winter sports, for example) are not overly stringent. And fortunately wolverines live in such remote areas that human behavior is barely impacted by the proposed classification.

Most significant in this case is the fact that the proposed listing is concurrent with a unique recommendation. The USFWS hopes to facilitate reintroduction of the animal in regions where it has the most potential to reproduce and thrive. “The number one thing we can do to protect the wolverine is to get it in more places,” Fahey says.

Colorado is first on that list with a single documented wolverine currently known from the state.

“We want to find him a mate,” Fahey says, “and do whatever we can to allow the species to continue on its forward trajectory.”

Alas, Michigan fans, the Great Lakes region is not an option for reintroduction. Even the most frigid regions of Michigan’s Upper Peninsula could not currently support the wolverine, and (sacrilege!) “there is no evidence that the species ever was reproducing there,” Fahey says.

“To me, the wolverine is really symbolic of the American West.”
— Bridget Fahey, MS ’97

Ultimately the Colorado legislature will decide whether to approve the reintroduction in its state. Michigan alumni in the region who feel passionately about the cause can share that passion with their lawmakers.

Meanwhile, the USFWS will make its final determination by February 2014 whether to classify the species as threatened under the Endangered Species Act. The ongoing process is a public one, and people can submit comments through May 6, 2013, at the Federal eRulemaking Portal at www.regulations.gov. Type “wolverine” in the search box.

“I think it’s important to understand this creature and how unique it is,” Fahey says. “To me, the wolverine is really symbolic of the American west—that rugged iconic persona it has. And I think people should be proud that our country is dedicated to conserving such a unique animal.”

Worthy causes notwithstanding, this graduate of the School of Natural Resources and Environment says protecting the wolverine could have far-reaching implications for the University.

“I always make a joke in March when I fill out my [NCAA tournament] bracket that I pick teams based on which school’s mascot could beat the other school’s mascot,” she says. “In that, the wolverine usually goes pretty far.”

And as a Michigan Wolverine herself, she can’t help but add: “Beats the buckeye.”