There are at least two things that get under the skin of Dr. Lori Verderame, BA ’87, when she sees an appraiser estimating the market value of a person’s particular trash or treasure. 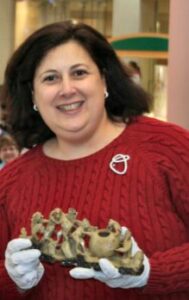 One is the scenario in which the appraiser is, in fact, a potential buyer, placing the “expert” in an obvious conflict of interest. The other is when the appraiser neglects to wear white gloves while touching the object in question. That’s a clear sign of disrespect for the object and its history, says this university professor and former museum curator and director.

“Handling a piece without protection is a big problem,” says Verderame, who is known simply as Dr. Lori to the art, antique, and history aficionados who comprise the long-established fan base called “the Dr. Lori Nation.”

That “nation” has grown considerably since Dr. Lori joined the Discovery Channel’s “Auction Kings” as the show’s expert appraiser. The reality TV show, produced by Los Angeles-based Authentic Entertainment, is shot on location at an auction house north of Atlanta. It’s just one of the outlets in which Dr. Lori demonstrates her extensive expertise—all while working to protect the interests of people who unknowingly possess valuable objects.

She discovered that protective tendency while first working at the Yale University Art Gallery and later at the Palmer Museum of Art at Penn State University, where in 1996 she earned her doctorate in the history of art and architecture.

One day she was approached by a victim of one of the most egregious offenses in her business: An unscrupulous appraiser had set the value of an object very low and subsequently purchased that object from the unwitting owner.

“It’s actually the reason I got involved in appraising art and antiques,” Dr. Lori says. “A 75-year-old woman had sold an historic document to an appraiser who gave her $50 for it. It turned out to be worth $50,000 and she had come to the museum to see if she had any recourse.”

It was then Dr. Lori had an epiphany: “I wonder if there are any other [victims] like that?”

Oh yeah there were.

To serve and protect

Since that encounter, Dr. Lori has taught audiences about identifying valuable antiques and family heirlooms through her Antique Appraisal Comedy Show. 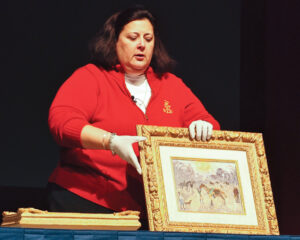 Dr. Lori appraises antiques on the spot and teaches audiences how to identify valuable pieces.

Over more than a decade, she developed a dedicated audience across multiple channels, including fans who buy tickets to her live stage shows and cruise ship performances. It’s an energized and varied career that allows her to do what she loves most: educate people about the precious and historic items gathering dust in their closets.

“I hear people’s stories, their family histories, and listen with empathy when they’ve been ripped off,” she says.

Fortunately, many of her encounters do end happily. Like the time a man tore open the back of a chair he planned to re-upholster. Beneath the fabric was a pastel painting by the French impressionist Edgar Degas. It was authentic and worth $100,000.

Another time, Dr. Lori tagged a weathervane as being worth $15,000. The owner had removed it from his property in Louisville, Ky. That piece of farmland was in foreclosure and the appraiser’s information helped save his family homestead.

And then there was the crystal talisman in the form of a sphinx encrusted with gems. The piece, once owned by Napoleon Bonaparte, belonged to a man who had traded a set of golf clubs for it. He clearly got the better end of that deal as the talisman was priceless.

In the course of just one year, this resident of Bucks County, Pa., will evaluate some 20,000 objects at more than 150 events around the globe. She performs in-home appraisals with private clients, writes a column syndicated to more than 400 publications worldwide (reaching nearly 10 million readers a month), and produces a blog for Lifetime television. 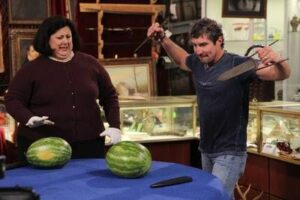 Katara knives on the set of Discovery’s Auction Kings

In addition to her role on “Auction Kings,” which she joined at the beginning of season three, she has been featured on “The Tonight Show with Jay Leno,” “The Daily Show with Jon Stewart,” and “Anderson Cooper Live.”

Dr. Lori does all of this while coping with two parents suffering from Alzheimer’s Disease. It was her father, she says, who inspired her initial love of history and antiques. The World War II veteran served as a combat medic in the Pacific Theater before pursuing a career in business and a hobby in collecting art, antiques, and other artifacts.

“I was always surrounded by antiques, yard sales, old stuff,” she says, reflecting on happier times. “As the youngest of three daughters, I was ‘my father’s son,’ always in the garage and tagging along with him antiquing.”

Inspired by those early years in her dad’s garage and at New England’s many flea markets, this Connecticut native chose to pursue her doctorate after first earning an undergraduate degree in history at U-M. She picked Michigan for two basic reasons: “It’s one of the best history schools in the nation—and it wasn’t in Connecticut.”

No-nonsense comments like these showcase this antique appraiser’s most endearing quality: honesty. It’s not always pretty, but it is very entertaining, and it has served her well in the Dr. Lori Nation and beyond.

“People know I’m going to tell them the truth,” she says. “I know how to work with aging objects and how to highlight their fascinating history. And, there’s fun and laughter involved in all of it.”

Once in a while there’s even a genuine thrill.

“This has been a super roller coaster ride,” Dr. Lori says, “and I have a front-row seat.”

About the Author
J.D. Booth is a freelance journalist/writer whose greatest professional joy is being able to coax great stories from people and bringing those tales and ideas to life. He can be reached by e-mail (jd@jdbooth.com) or phone at (313) 254-4599.
Social
Share on: Share on Twitter Share on Facebook