In it to win it with Al Storey When Al Storey arrives at your office, he repositions his chair so you are both seated on the same side of the desk. It levels the playing field, he notes. An emeritus speech professor and longtime debate and forensics coach, Storey is well-versed in the subtle dynamics of the unspoken word. 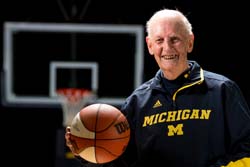 At 91, Storey also is an active and accomplished athlete. If this were a Tuesday or Thursday, the U-M graduate would have just finished a game of three-on-three half-court basketball at the Intramural Building. If it were a Monday or Saturday, he would have come right from the paddleball court, which he first discovered nearly 70 years ago.

But this happens to be a Friday, and Storey, BA ’49/MA ’50/PhD ’53, is feeding his other passion: teaching. He spent the morning at the Michigan Union advising Anisha Chada, BS ’13, the featured student speaker at spring commencement. Storey has been advising U-M’s winter and spring student commencement speakers for more than a decade. He is confident Chada will perform well.

“I’m just trying to help her bring out her best,” he says, “and have a little fun with it.”

Performing at one’s best—and having a little fun with it—is a credo that informs everything Storey does. He holds medals, trophies, cups, and platters for virtually every sport he’s ever tried. And he has tried plenty: swimming, long-distance running, paddleball (singles and doubles), racquetball, volleyball, basketball, golf, and fast-pitch softball.

“I’m competitive and I enjoy sports of all kinds,” Storey says before launching into the strategic merits of a well-executed dink shot that confounds paddleball opponents many years his junior. Storey relishes the chance to face off against athletes of any age or gender. He recently recruited a 34-year-old female player, a former college athlete, to join his weekly basketball scrimmage. Both are members of the Rotary Club of Ann Arbor.

“It’s satisfying to play against younger people,” Storey says, noting it’s as much about camaraderie and fellowship as it is about athletics. “I appreciate the sportsmanship and the talents of the other participants.”

Appreciation of others’ talents also factored into Storey’s teaching career. He pursued a career teaching speech because it provided an opportunity to work one-on-one with people who were interested in improving their communication skills.

“It seems many of the world’s problems could be resolved with better communication,” he says. At the height of the black action movement in early 1970, for example, Storey defused a tense classroom situation by relying on wisdom he’d gained through years coaching forensics and debate. “Students were walking through the Frieze building, beating on drums and ash cans,” Storey says. “Two of the protestors were trying to stage a boycott of my class. I asked them why. They told me they wanted to get the students’ attention. And I said, ‘Wouldn’t you have a better chance if you just spoke to them?'” A lively and productive dialogue ensued.

Two years later, Storey ran into one of the protestors in the locker room at the IM Building. The student had become a teaching assistant in the College of Engineering. “We talked a little while,” Storey says. “And I got the feeling he was having a very positive educational experience.”

Though he’s traveled extensively and visited more than 30 college campuses, Storey says he always enjoyed returning to U-M and Ann Arbor. “U-M is interested in helping people achieve a better life, achieve their goals,” he says. “It’s not just driving for individual, personal success at the expense of someone else. I’ve always appreciated that sense that we are not just here to blow our own horn. We’re here to help people and society.” 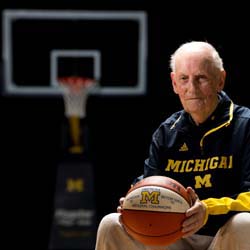 Storey enrolled at U-M via the GI Bill as a 25-year-old veteran of the U.S. Coast Guard. He joined the speech department in 1953 and retired in 1989, but continued to teach until 1993. He also served as director of the U-M Extension Service from 1970-89, a job that melded seamlessly with his own passion for lifelong learning and self-discovery.

“You keep more alive, more comfortable, and more satisfied with yourself if you try new things, grow at a pace you can handle, and set reasonable goals,” Storey says.

A happy marriage, vibrant social circle, and active church life also contribute to his sense of well-being. It all goes back to that appreciation of other’s talents: Storey can tell you the names of grade school teachers he admired, influential coaches and bosses he revered, and friends he had in childhood, college, and the military. An enduring passion for Michigan football and basketball works too. He can cite the actual dates of the few games he has missed in 65 years.

Not even a recent bout with prostate cancer could slow him down. In true form, Storey scheduled his radiation treatments around his athletics routine and Rotary commitments.

That may well be true. But as anyone who knows Storey will attest, it’s what he does with those genes that makes them truly great.

DEBORAH HOLDSHIP is the editor of Michigan Today. She joined the University in 2007 as editorial manager in the marketing communications department at the Ross School of Business, where she was editor of Dividend magazine for five years. Prior to working at Michigan, Deborah was associate director of publications at the UCLA Anderson School of Management. From 1988-2001, Deborah worked in the entertainment industry in Los Angeles, where she was a reporter and editor at Billboard magazine and an associate editor and video producer at LAUNCH media. Follow her on Twitter: @michigantoday.
Social
Share on: Share on Twitter Share on Facebook