A daughter reflects on her father’s return to school

The thick envelope arrived last spring. Not long before I finished graduate school, my father announced that he, too, was about to begin a new chapter. “Ellen and I are heading back to Ann Arbor,” he wrote in an email to family and friends. “I have been offered admission to the Masters in Health Informatics program at the University of Michigan. I knew I should have saved my green army jacket. Please plan to visit for parents’ weekend.” 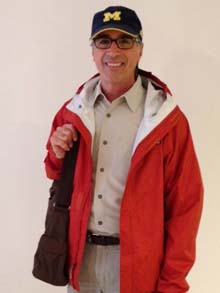 The revelation that my father wanted to pursue a new intellectual interest came as little surprise. Growing up, Dad would sit in our living room on weekends listening to Aristotle and Plato lectures on his Sony Walkman. His passwords for our electronics were always some variation of “aware” and “reason.” He was a thinker, a man of ideas, yet someone who never lost touch with his inner kid. He could watch “Looney Tunes” and “Charlie Rose” with equal gusto.

But a rigorous graduate program at the age of 62? How could someone who hadn’t been in the classroom since 1971 compete with someone barely old enough to remember the Clinton Administration? And what would happen to Dad’s 36-year medical career? The reactions to his big news ranged from, “Wow, that’s pretty brave!” to “Have you gone crazy?”

Dad questioned his own sanity, but with my mother’s reassurance, he began researching housing options in Ann Arbor for the fall. Mom was less encouraging when a classmate asked him, through the program’s Facebook page, if he needed a roommate: “You tell her that you already have a roommate!” 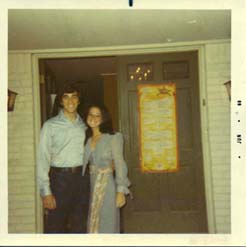 Together, my parents rented an apartment on Huron Street, just blocks from the landmarks of their first college experience 40 years earlier: the two-bedroom where my mom and aunt hung multicolored beads from the windows, the fraternity house where Dad served as social director/keg procurer, the Diag where their anti-war group congregated. My mother has kept a pair of bell-bottoms from those years, embroidered with the slogans “Flower Power” and “Make Love, Not War.”

This time around, it was a little harder for my parents to blend with the anti-establishment crowd. Dad tried his best to act cool during orientation, yet he soon realized his groovy days were over. “It’s an honor to have you in our program, sir,” a 23-year-old classmate said after my father introduced himself. Mom felt equally ancient when she discovered that her friend’s grandson was in a class she’d decided to audit. 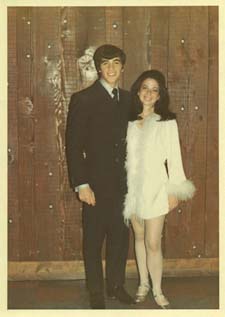 Big night out, circa 1970. (Image courtesy of Kate Schmier.)

Still, they hit the books in earnest. “Not many people get a ‘do-over’ in life,” Mom said. “We’re going to make the most of it.” My mother picked her classes based purely on interest. During the fall semester, she selected “The History of the Universe” with Professor Rudi Lindner and “Jewish Political Thought” with Professor Zvi Gitelman. Both instructors were happy to have her, yet they were adamant that she keep up with the reading. “I can’t talk,” she’d tell me on the nights before her classes met. “I’ve got 50 pages left and I must get through them.”

As Mom plunged into black holes and dark matter, Dad’s coursework took him into uncharted territory. Health informatics is a joint program in the School of Public Health and the School of Information, and my father soon learned that “Computer Programming” was a prerequisite for nearly every upper level class. “When I was an undergrad,” he told me, “one computer took up an entire room.” For his code-savvy classmates, the languages of Python and XML were as familiar as the menu at Pizza House. But for Dad, the material was anything but intuitive. Nonetheless, he managed to dig up my vintage Texas Instruments scientific calculator, a machine so outdated that the print on several buttons had worn off. He slogged through the textbook, plugged in formulas, and became a regular at office hours.

His attitude was less positive when it came to papers and group projects. Somehow, it hadn’t occurred to him that essays would be assigned as part of a quantitative program and this caused no small amount of anxiety. As his midterm paper deadline loomed, I received a frantic call from my mother. “I need you to talk to Dad,” she said. “He’s having a meltdown.” When I was in school, my father had been the one to talk me off the ledge during moments of writer’s block. I decided to give him the same advice he’d always given me. “Break it down into smaller assignments,” I told him. “First, come up with your thesis statement and then make an outline.” I’m not sure whether he took my suggestions, but he managed to calm down and complete the task. A couple weeks later, he emailed me his paper with the subject line “Got an A.” 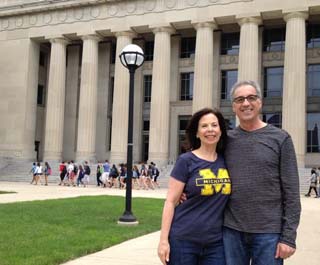 Back to school and loving it, 2013. (Image courtesy of Kate Schmier.)

As it turned out, I wasn’t the only one informed of Dad’s academic success. When I traveled to Michigan over New Year’s, my mother hosted a brunch at my parents’ home in Birmingham. I come from a large, boisterous family in which gatherings consist of heated exchanges about everything from the Tigers’ game to gun control. In the midst of the melee, my grandmother pounded her proverbial gavel. “I have something to say!” she announced. The conversation stopped and all eyes focused on her. “Does everyone know that Ronny got straight As this semester?” My father, ever bashful, dashed into the kitchen while everyone at the table burst into laughter.

Dad got a laugh again when he pulled out his AARP card during a grueling epidemiology final. “Shouldn’t this qualify me for untimed testing?” he asked. “Nice try,” his graduate student instructor said. He didn’t ace that test, but he did walk out of the exam with a renewed sense of why he and my mother had come back to Ann Arbor. He thought of the advice he’d received as a medical resident many years ago, words he’d quoted in his statement of purpose for the health informatics application. “As we were about to administer an anesthetic to a very sick three-month-old,” Dad wrote, “my instructor said, ‘One must have challenges.'”

Kate Schmier is a writer and editor living in New York City. She received her bachelor's from U-M in 2007 and her MFA in writing from Sarah Lawrence College in 2012. She is the recipient of an Elizabeth George Foundation grant for emerging writers.
Social
Share on: Share on Twitter Share on Facebook