Who was James Angell? 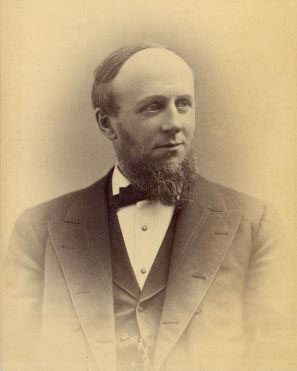 University rules in the mid-1800s required students to attend chapel first thing every morning. But by tradition, chapel was a melee. In the big auditorium of the Law Building, just north of where Angell Hall stands now, a thousand students, most of them farm boys, yelled, pounded their feet, and pelted each other with anything handy, usually apple cores and walnuts. This had been going on for 20 years, and no president had been able to do anything about it. Professors had quit attending out of disgust. 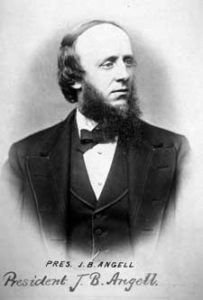 James Burrill Angell had heard about chapel at Michigan even before he got to Ann Arbor in the summer of 1871. He’d just left the presidency of the University of Vermont to take over at U-M, though only after he played hard-to-get for more than a year; he finally said yes when the Regents agreed to his demand for an annual salary of $4,500.

On the first day of the term, Wednesday, Sept. 24, Angell attended chapel and watched the usual small riot from the sidelines.

The next morning he came early, just as some sophomores were piling up ammo to throw at freshmen. Angell asked them—”kindly but firmly,” he said later—not to throw stuff. They looked at him—and dropped their nuts under their chairs.

The following day the new president conducted prayers himself and made a few general remarks about rowdiness in chapel. He did it with “a cherubic smile and an appeal to [the students’] sense of fair play.” And that was that. Rowdiness at chapel was over.

People said there was just something about Angell.

“The kindliness of his manner and the gentleness of his words were sometimes mistaken for weakness and acquiescence,” said Martin D’Ooge, a professor of Greek who watched Angell in the presidency for many years. “Not until they felt the firm grip of the strong and determined will did the boys learn to know that his words, spoken ever so gently, could not be lightly disregarded.”

And he met people halfway, as students soon learned. Angell led the prayers at chapel every morning. But he made chapel voluntary.

“He met both teacher and student alike in such a way as to put them at once at ease,” Professor D’Ooge said, “and to make us feel that we were meeting not a superior but an equal and a friend.”

A man of conviction

Born in Scituate, R.I., in 1829, Angell was descended from a friend and fellow traveler of Roger Williams, the New England rebel who championed religious freedom against the Puritans. Angell was so brilliant as a student at Brown University that the faculty recruited him to join their ranks. He did for a while, then became editor of the Providence Journal, where he was a strong backer of Abraham Lincoln.

View photos of Angell through the decades

Once, a delegation of politicians who opposed Lincoln’s pro-Union policy made a bid to buy the Journal. Meeting with them, Angell detected their real interest was to change the paper’s editorial stance. He held up his quill pen and said: “Gentlemen, I presume you can buy the Journal, but you have not money enough to buy this quill.” That terminated the discussion.

When the Civil War ended Angell returned to academe. After several years at Vermont, he responded to the challenge of building up the still shaky public university in the West. He spoke with a Yankee twang, and it took him a while to set aside a belief in New England’s cultural primacy. But he made friends and allies immediately, and he got to work on the project of turning a great experiment—that is, the notion of a world-class university supported by public means—into a practical reality.

Angell’s mixture of good fellowship and a strong will made him the most influential of Michigan’s presidents. He served until 1909—38 years in which U-M expanded from three departments to seven; the faculty grew from 35 to some 250; and enrollment rose from about 1,000 students to more than 4,000. By the time he retired, Michigan was easily the leading public university in the country.

Angell revolutionized the curriculum, replacing the old system by which every student took virtually the same course of study with a new system heavy on electives. That not only gave students freedom to study what they wanted; it also led to a spectacular diversification of course offerings. And that led, in turn, to a faculty of top-tier minds in many fields, from John Dewey in philosophy to Frederick Novy in bacteriology.

For most of his tenure Angell wrote his own letters by hand; he personally registered every student enrolling in the Department of Literature, Science and the Arts; and he taught courses in international law. (U.S. presidents sent him on foreign missions; his tours of duty led to U-M’s special ties with China and the Philippines.) Michigan’s first women students started just when Angell became president. He supported them and became a strong advocate of co-education.

An uncommon education for the common man—and woman

In Angell’s time, college was widely seen as the elite sphere of the wealthy. He was determined to have Michigan break that mold. In the 1880s he did his own study to find that the fathers of nearly half of U-M students earned a living with their hands, and fewer than one in four had a college degree. He pitched Michigan on that basis, and thereby established U-M’s reputation as a democratic, egalitarian place offering “an uncommon education for the common man” and woman.

“Have an aristocracy of birth if you will,” he said, “or of riches if you wish, but give our plain boys from the log cabins a chance to develop their minds with the best learning and we fear nothing from your aristocracy.”

“He met both teacher and student alike in such a way as to put them at once at ease, and to make us feel that we were meeting not a superior but an equal and a friend.” —Martin D’Ooge

He also insisted that students who enjoyed the benefits of a public-supported education owed society something in return—and that their public service in turn justified public support. He would tell the story of a doctor trained at U-M who was called out in the middle of the night to save the child of a poor family. “Who is reaping the greatest benefit from the education he has gained here,” Angell asked, “the physician, with or without his scanty fee, or the anxious parents to whom he has restored the child from the jaws of death?”

In his final baccalaureate address in 1909, Angell told his last class of graduating seniors: “We have a right to ask, and we do ask, the University asks, the state asks of every one of you, that your life be shaped on a larger and fairer pattern because you have been here.”

Angell died in 1916 at 87. One of his sons became president of Yale; another became professor of law at Michigan; a grandson became U-M’s chair of sociology; and a granddaughter won the Pulitzer Prize in history.

What do you think about President Angell? Tell us about your experiences in Angell Hall.

Sources include Angell’s papers at the Bentley Historical Library; Kent Sagendorph, Michigan: The Story of the University (1948); Howard Peckham, edited and updated by Margaret L. Steneck and Nicholas L. Steneck, The Making of the University of Michigan 1817-1992 (1992); and The Reminiscences of James Burrill Angell (1912).