Every month for years, a beautiful box of fruit from Harry and David would arrive at the Birmingham, Mich., home of Frank Hursley Jr.

“Love, Frank and Doris,” was the recurring message typed to Frank Jr., his wife, Lois, and their nine children. 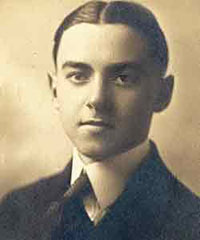 Media experts would have been quick to answer. Frank Hursley, AB ’25, and his wife, Doris, created “General Hospital.” Among television’s early titans, Frank was a pioneer who helped create the “soap opera.” To his estranged relatives in Birmingham, however, Frank was simply the mysterious and ever-absent Grandfather Hursley.

“General Hospital” debuted in April 1963; it is TV’s longest-running scripted program currently in production. Noted for introducing the archetypal “super couple,” the show set ratings records in November 1981 when 30 million viewers tuned in for the wedding of star-crossed lovers Luke and Laura Spencer.

Much like his fictional characters, the show’s creator lived a personal storyline that rivals any good soap. There’s a shotgun wedding, scandalous affair, estrangement from his only son, and a high-profile, multi-million-dollar lawsuit that plays out to this day. 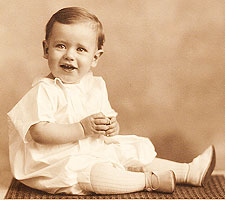 Frank Hursley Jr. was just a baby when his father left. (Image courtesy of Duncan Hursley.)

The scene opens in 1925 Detroit, where, five months into an ill-conceived marriage, 22-year-old Frank Hursley and his 19-year-old wife, Madeleine, welcome the birth of Franklin McColl Hursley Jr. Within six months, the couple would divorce. Having just graduated from the University of Michigan, Hursley would leave town, enroll at the University of Chicago, and pursue a master’s degree.

The stint in Chicago led to a position teaching American literature at the University of Minnesota. So Hursley moved to Minneapolis and married again, a librarian this time. But that marriage was as doomed as the first. When the young professor accepted a position at the University of Wisconsin-Milwaukee, he met and fell in love with his future writing partner, Doris Berger Welles. Welles was a married attorney with two daughters and a mother who was a former regent of the university. Once it became clear her daughter wanted to marry Hursley, Welles’ mother allegedly pressured university officials to reappoint him to his chair in the English department of the extension division. 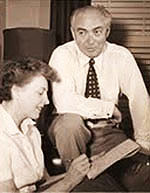 A publicity still of the partners at work. (Image courtesy of Duncan Hursley.)

The dean in charge bristled at the pressure and was fired from the university soon after. He accused the administration of condoning nepotism, improper conduct, and political interference. An investigation into the alleged improprieties was launched, splashing the Hursley/Welles affair across the front page of the Milwaukee Sentinel on April 26, 1935: “Fight for morality cost job, Dean Snell tells senators.” The dean claimed the couple’s love affair “was the primary cause of the intrigue leading to his ouster.”

In the end, Hursley retained his chair. He and Welles each secured their respective divorces (Frank’s second), and the couple was married in 1936. Together they had a daughter, Bridget.

Frank and Doris Hursley soon established themselves as a writing team. They began scripting radio serials, and in 1946 they moved to Los Angeles and got an early break writing western-themed TV shows, including “Have Gun Will Travel.” In 1957 they signed on to write for the CBS daytime drama “Search for Tomorrow” and eventually created “General Hospital” for ABC. There they reigned as head writers through 1973. Upon retiring to Santa Barbara, Calif., they named a new pair of head writers to succeed them: their daughter, Bridget, and her writing partner/husband, Jerome Dobson.

Back in Detroit, Frank Hursley’s namesake and only son had grown up with his single mother, Madeleine. While serving in World War II, Frank Jr. was recovering from surgery in a German hospital when he learned the U.S. State Department had sent a telegram to Madeleine, mistakenly reporting him as missing in action. Grief-stricken, the woman lapsed into a diabetic coma and died.

Frank Jr. returned to Detroit after the war, mourning the untimely loss of his mother. “This is when he heard from his father for the first time,” says Duncan. Frank Sr. invited his son to live with his family in California and offered to put him through college. But the younger Frank, surrounded by a loving extended family, declined the offer from this man, who was, for all intents and purposes, a complete stranger.

The next father-son encounter would happen in 1962 when Frank Sr. traveled to Detroit for the funeral of his own mother. Frank Jr. was 36 at the time, married with nine children under the age of 14.

“Family legend has it that the brief, emotional reunion was a loving one; two very busy gentlemen sharing a cautious hope for some form of integration moving forward,” says Duncan.

But, as in any good soap opera, things did not play out as expected.

Once Frank Sr. returned to California, communication dropped off. The only connection the Detroit Hursleys would have to their famous patriarch going forward would be the daily shout-out that continues to close “General Hospital” today: Created by Frank and Doris Hursley. And of course, there was that monthly box of fruit from Harry and David.

“My father never really spoke about his father, unless asked,” says Duncan. “And whenever he did speak of him, it was always with respect, but also somewhat apologetic in tone that he didn’t know much about him.” 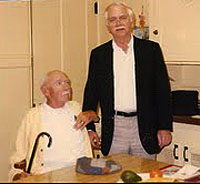 After Doris Hursley passed away in 1984, doors began to open. During a stint working in Los Angeles, grandsons Duncan and Timothy Hursley visited the 81-year-old Frank Sr. at his Santa Barbara estate.

The reunion paved the way for a handful of poignant visits between elderly father and aging son. “I can still see my grandfather,” Duncan says, “looking at my father and saying, ‘Well I’ll be goddamned! I’ve got my son!'”

Alas, the family bliss came with strict boundaries. Frank Jr. reached out to half-sister Bridget Dobson, but “the only response he received was from a lawyer,” Duncan says, “stating that she had petitioned for control of their father’s estate.”

Upon Frank Sr.’s death in 1989, Frank Jr.’s family was stunned to read his obituary. There was no mention of his son or of his nine grandchildren, one of whom was named Frank M. Hursley III.

Back in L.A., Bridget Dobson was winding down her own successful career. After “General Hospital,” she and her husband worked as head writers of the long-running CBS soap operas “Guiding Light” and “As the World Turns.” They also created “Santa Barbara,” a show fraught with its own behind-the-scenes drama, including an extended court battle with NBC and New World Television brought by the Dobsons regarding creative control.

Bridget Dobson retired from TV in 1995, but the plot still thickens. In 2011 she and her half-sisters from Doris Hursley’s first marriage sued ABC, alleging the Hursleys’ estate had been cheated out of royalties generated by “General Hospital.” The plaintiffs are cited as the Hursley heirs.

Frank Hursley Jr. passed away in 2008; his heirs are not included as part of Frank Sr.’s estate or the litigation. His widow, Lois, still lives in the home where they raised Frank Sr.’s nine grandchildren.

Today “General Hospital” serves as a consistent reminder of the Hursleys’ link to pop culture history. Grandson Duncan credits current executive producer Frank Valentini and head writer Ron Carlivati with carefully shepherding Frank and Doris’ legacy and keeping the show vital amid a spate of recent daytime cancellations. In fact, during the opening scene of the April 2 episode that marked the daytime drama’s 50th anniversary, a nurse answers the phone and says, “Oh, hey, Doris. How’d you like Frank’s big surprise?”

“I’m sure Frank and Doris would be quite amazed that ‘General Hospital’ would still be going 50 years later,” Duncan says. “The show is an American cultural icon.”