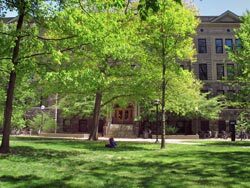 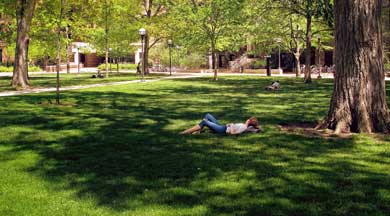 Walk along any path on the Diag and it’s easy to see the University of Michigan is a “tree campus.” And that’s not just an adjective; it’s an official certification. The National Arbor Day Foundation recently designated U-M a “Tree Campus USA” for the fifth consecutive year.

Some 16,000-17,000 trees cover the University grounds. But it’s more than numbers that speak to the National Arbor Day Foundation. To earn the “Tree Campus USA” certification, campus communities must effectively manage their trees; develop connectivity beyond campus borders to foster healthy, urban forests; and engage students in service learning opportunities, among other criteria.

“One of my favorite spots is on North Campus in the shadow of the Lurie Tower.”—Marvin Pettway

The award is “recognition for work we’ve already accomplished,” says Marvin Pettway, senior supervisor in the Plant Building and Grounds Services Department. “It recognizes the great stewardship the University has with its campus forests in past and future.”

That stewardship has deep roots dating as far back as 1857. The campus was just 20 years old then, short on shade and sorely lacking in landscape design. A young law professor named Andrew Dickson White, new to Michigan, simply could not abide the fact that a town named for a copse of trees was so devoid of foliage. He soon engaged students and local citizens in a tree-planting and care campaign that produced lush green canopies across the Diag.

Each spring and fall Pettway’s U-M crews plant 60-100 new trees, says Kenn Rapp, U-M’s landscape architect. It’s a job that requires commitment and no small bit of patience. “New trees require a lot of attention and we want to make sure they receive it,” Rapp says. “Trees are long term. You hope every one you plant is there for a hundred years.”

“I like a couple blocks of actual woodland on North Campus because everything is more relaxed, as nature intended.”—Jane Immonen

Sadly, that’s not always the case. In the 1960s Dutch elm disease invaded campus and felled much of the green canopy White had helped create. The ash borer infestation, which began decimating ash trees across the Midwest in 2003, left an even more recent mark on Ann Arbor.

“We had 720 green and white ash trees on campus,” says Jane Immonen, U-M’s forestry specialist who also manages the plant disease program. “Then the emerald ash borer arrived. Now we have eight trees. With yearly treatment, I was able to keep a few going.”

The most common type (genus) of tree at Michigan today is maple (14 percent), followed by pine (12 percent), crab apple (11 percent), spruce (9 percent), and oak (8 percent). Each genus is represented by several varieties.

“I love our Diag. Those are the most impressive, the oldest trees.”—John Lawter

The U-M campus also features plenty of beautiful spring flowering trees. In addition to the aforementioned crab apple (Pettway thinks the white varieties outnumber the pink), there are serviceberries, magnolias, and both pink and white dogwoods. Redbuds, an early harbinger of spring, make up two percent of the campus trees.

The grounds crews maintain detailed inventory and maintenance records on each campus tree. Today’s process is closely akin to White’s low-tech, 19th-century methods. He was known to keep a plot of the grounds with the location of each tree and the name of the student who planted it.

Another day on the Diag. (Image: Michigan Today)

Students continue to play a key role in the University’s mission. In order to earn certification as a “Tree Campus USA” each school must have a Campus Tree Advisory Committee comprising faculty, students, facility management staff, and members of the community.

“My favorite places are the Law Quad, because of the architecture and the beautiful trees, and the courtyard at the Michigan League. It’s such an intimate spot in the middle of a busy campus.”—Kenn Rapp

Another Tree Campus standard is having a tree care plan. “Ours is cradle to grave,” Pettway says. “We plant them, nurture them, and care for them, and we have the capability to remove them [when necessary].”

The Tree Campus Program also requires schools to have at least one future tree-related goal. Michigan’s primary aim is “to increase our crown coverage on campus,” Pettway says. “We estimate it’s 25 percent. We would like to move up to 40 percent. It’s a 10-year goal.”

In addition, funds to purchase and care for trees must be a standing item in a university’s budget to qualify for the Tree Campus certification. Michigan’s campus forest budget is roughly $320,000. Tree-purchasing funds vary, but average about $40,000 annually, which works out to about $9 per student. The Arbor Day Foundation reports the national campus average expenditure for trees is $9-11 per student.

One major reason Michigan’s campus forests continue to thrive is consistency, says Rapp. “You’re always putting in a few trees to replace what you have taken out. We also bring in different species of trees. We’re working to increase that canopy.” He and Pettway would like to see more hickory trees on campus; they’ve started by establishing new growth on North Campus.

And what about replacing those lost elms? Things started looking up about six years ago, when Immonen discovered a nursery that offered disease-resistant seedlings. For an investment of $3 apiece, she was quick to place an order and soon received “two little bundles of pencil-sized sticks.”

She rounded up some gallon sized pots, mixed and warmed topsoil and compost, and kept the seedlings in a greenhouse through their first winter. When spring arrived Immonen planted her elm seedlings in some unused space on North Campus.

Crews already have transplanted some of the elms, and they plan to move more this fall. Some are growing along the State Street corridor, in front of Angell Hall, right where Andrew Dickson White’s elms once thrived. Surely he is smiling somewhere.

In her EarthFest speech on sustainability in September, 2011, U-M President Mary Sue Coleman referred to the University’s earliest trees and their legacy:

“Sustainability at Michigan is like Andrew Dickson White’s trees on the Diag,” she said. “Deeply rooted. The work of students. Expansive, and still growing.

“And intended to last for generations.”

Do you have a favorite tree spot on campus?