It was my freshman year at the University of Michigan and Elmore Leonard arrived to speak to my English class. It’s been three decades and I still remember his round face and grandfatherly air. I also remember feeling we were in the presence of a renowned talent, but one without pretense. He seemed to wear his fame like the comfortable pair of Birkenstocks on his soles. 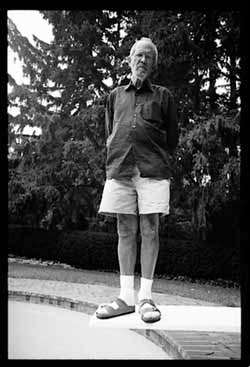 Elmore Leonard, photographed by Lynn Isenberg, at his Michigan home.

At the end of his talk Elmore Leonard said he needed a ride home. I felt my hand rise into the air. The next thing I knew the author was riding shotgun with me from Ann Arbor to Birmingham. We talked about books and writing and Michigan.

Five years later, now living in Los Angeles and working in the entertainment industry, I was having drinks with a literary agent who, as it turned out, represented Elmore Leonard. I shared my story and that connection created a bond wherein I gained a colleague for life.

Another five years passed and, while visiting family and friends in Michigan, I was invited to a party. I walked in and there stood Elmore Leonard holding court in those leather Birkenstocks. I reintroduced myself and we made small talk over the hors d’oeuvres. He looked exactly as he did a decade before; he didn’t seem to change or age. There was a reassuring steadfastness about him; an even, cool calm—those same underlying attributes shared by many of his characters.

Several years later I encountered Elmore Leonard again, this time at the UCLA Book Festival. He introduced me to his son, also a writer, and to his researcher and righthand man, Greg. As always I was struck by the fact that he appeared to be the same steady, even-keel guy. Consistently kind and (even inside a large auditorium) willing to reveal the “secrets” of his craft.

Never put an adverb in front of “said,” Elmore Leonard told the aspiring writers in the crowd. “Said,” he said, “is enough.”

Years passed and I was back in Michigan working on a photography book about men and their shoes. I had started in Hollywood photographing filmmakers—producer Stephen Nemeth (Fear & Loathing in Las Vegas, Flow, The Sessions) in his restored vintage Nikes, screenwriter Dale Launer (My Cousin Vinny) in his hush puppies, etc. Now I stood in Elmore Leonard’s home preparing to photograph those same sandals that had carried him and his characters across the globe. He took me on a tour of his writing lair and shared with me his process. There on his big desk sat a yellow legal-sized pad where he wrote by hand. Yes, he wrote entire novels by hand. 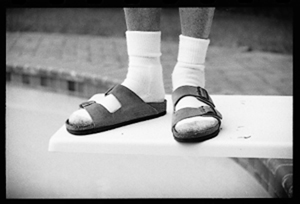 It was a summer day and Elmore Leonard wore shorts with white socks and his trademark Birkenstocks. I composed several shots inside his large office but the light was dim. Eventually we settled on a series of setups outside with Elmore Leonard standing on the diving board hovering above his pool. I look at these black-and-white photos today in the wake of his recent passing, and it’s as if the essence of the soles upon which he and his characters stand are timeless. It’s as if Elmore Leonard—soul and all—is, without surprise, standing on water.