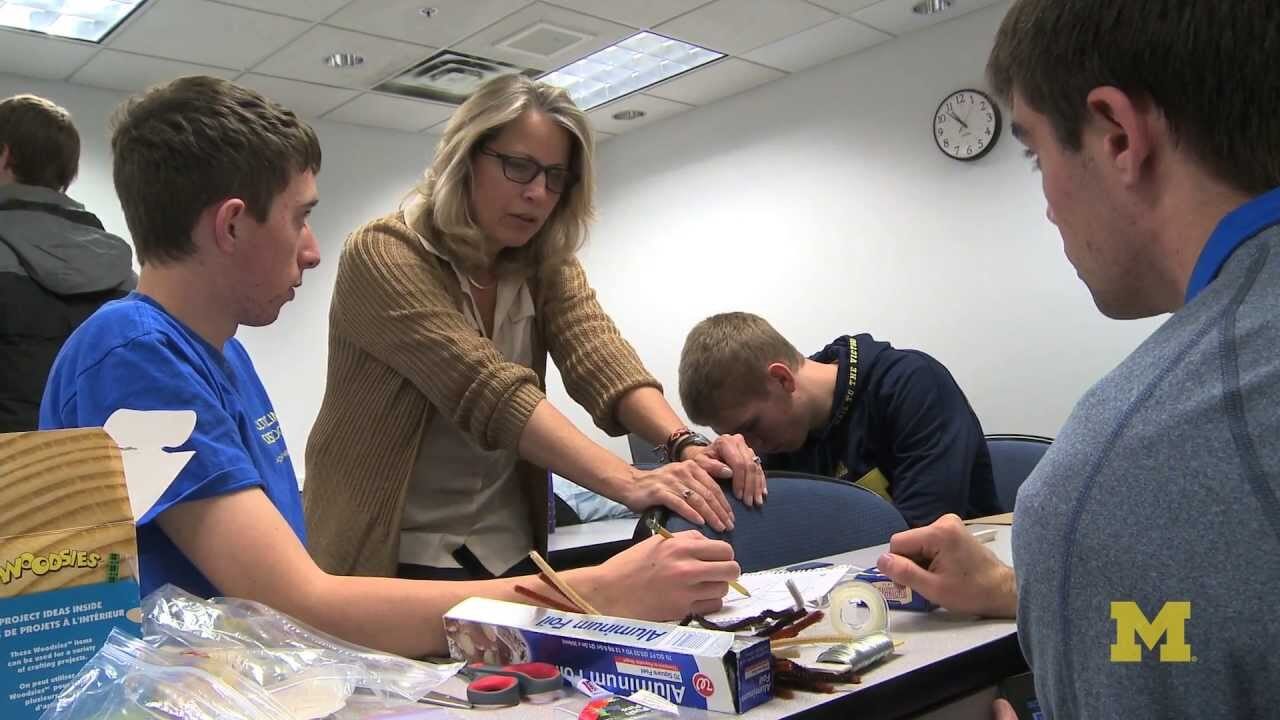 Straws, Popsicle sticks, toothpicks, aluminum foil, pipe cleaners, foam board, and other assorted items are strewn across desks at the front of the room—there for the taking.

Conversations can be heard around the classroom about how to scale life-size items, some intricately drawn on sophisticated computer software programs, into crude prototypes that measure mere inches.

Although an overall plan has been settled prior to class, some last-minute negotiations, a few creative brainstorms, and some feedback from the professor result in a bit of tweaking.

This is Engineering 100. And the miniature foam/wire/cardboard creations represent full-size water catchment systems designed for community gardens in Detroit.

“I really love the idea of using my engineering skills to solve real world problems and apply it to a service project,” says Nicole Rojas, a student from Cincinnati, Ohio. “I’m learning a lot and also doing what I am rally passionate about, which is a service project.”

Once the small-scale creation is perfected during one day’s class, students move into the Wilson Student Team Project Center on North Campus to build larger versions of the innovative, yet functional, designs for Focus: HOPE, an organization in Detroit that seeks to alleviate hunger and economic and educational disparity in the inner city.

The students’ goal: To meet their client’s needs by coming up with a creative, fun, and effective solution for watering garden plots that will grow food for community residents.

The course goal: To give first-year students hands-on exposure to the field of engineering in a course that departs from the lecture format often found in introductory classes, and to inspire them to think about “Engineers Making a Difference,” the theme of this class section.

“Students these days in engineering are really prepared in math and in science. They come to us but they haven’t really tinkered with things,” says Lorelle Meadows, assistant dean for academic programs, Michigan Engineering. “If they don’t know how things go together then designing becomes a big challenge for them. So what we want to do is give students an opportunity to build something with their own hands. They are gaining skills that they don’t have first coming into engineering as they are learning what it is to be a practicing engineer.”

Except for those who choose a research-based section of ENG 100, all students who enroll in the course experience some sort of hands-on activity, Meadows says, and she has chosen to structure the sections she teaches around community service and learning.

Those in her sections are serving three community organizations. In addition to Focus: HOPE, they are working with Growing Hope in Ypsilanti and the Detroit Community Schools in the Brightmoor area of Detroit.

All of the partners are engaged in alleviating food insecurity in an urban setting. Students working with Growing Hope designed systems that allow community members to extend the growing season for community gardens. Those involved with the Detroit schools were challenged to design vertical growing surfaces and raised beds that allow more produce to be grown in limited space.

“[These students are] pushing the boundaries of creativity,” Meadows says. “They’re coming up with devices that are addressing the community partners’ needs in really innovative ways.”

One group thinks beyond watering the plants and builds a latticework design to provide a vertical growing space for plants that can climb.

Rojas’ group keys in on the client’s request for something engaging and fun, so for the small-scale prototype they fold cardboard soup bowls into small troughs that will allow water to cascade in a crisscross pattern down a wall. They wonder if recycled carryout containers could be repurposed to build the troughs.

“So you listened to your users. That’s excellent,” Meadows says during the early prototype building.

“It would be neat if it made noise; if you could get it to ring,” she suggests.

Yet another group has a plan for a covered bench for visitors to sit in while water cascades from a slanted roof into a trough, the group’s leader explains to Meadows, as he sketches the revised plan. Rainwater will flow through downspouts, over a playful pinwheel system, and be collected in basins that have faucets to control the amount of water released at one time.

“So you guys have to start building,” Meadows says. “I think you have a really good concept. I like it!”

Michael Jocz’s group also features a bench with a roof overhead that will allow water to run into a gutter system and then into tanks.

“I always thought engineers just designed everything and gave it to the workers to build, but didn’t really interact with the customer,” says Jocz, who came to U-M from Novi, Mich. “Through this class we actually talked with the community partner and got what they wanted.

“As an engineer, you’re not going to be doing it all by yourself. You’re going to be working with a team. There’s benefits and challenges with that so you have to work through it together and create some pretty cool things.”

Meadows says feedback from the community partners is very positive.

“We learn a lot from the community partners. It’s one of those situations where everyone learns from each other,” she says. “You don’t go in saying, ‘We’re the engineers, we can teach you.”

Meadows says the theme of her sections of ENG 100 was inspired by the Peace Corps concept of making a difference one village at a time.

“What I hope students walk away from this class with is that they understand better the role that engineers have in society; the responsibility we have for the decisions we make as engineers. I hope they appreciate that engineers can do this kind of work, and how rewarding it can be working with community and having that kind of impact on the world.”

The client-centered focus of the class was a pleasant surprise to Rojas.

Hana Baker, who was exposed to Michigan Engineering during a summer camp her junior year in high school, says the approach to teaching and learning is part of what swayed her to come to the university.

“I really appreciate what we’re doing now. I don’t think people in engineering at other schools will be designing an actual product for someone, a client, as we’re doing for Detroit—actually making a difference. And this is what the class is all about,” says the Annapolis, Md., native. “This is why I chose Michigan. This is what I love about Michigan.“

(Read more stories about innovation in the classroom at Michigan’s World Class.)