The state of entrepreneurship 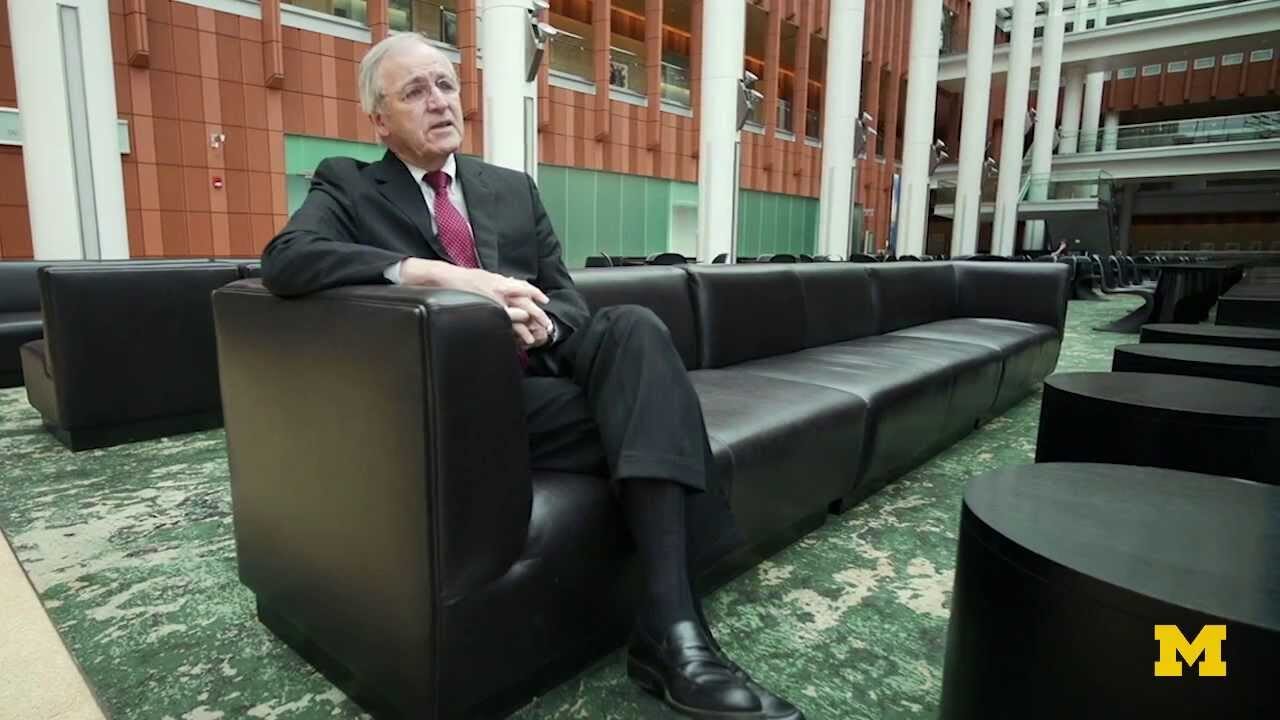 The state of Michigan may conjure up a number of images for people. Some may think of the Great Lakes. Others, the Rust Belt. Many may think of Detroit and its current struggles. But a deeper dive shows a new image for Michigan may be on the horizon, something that has been brewing for years and belies much of the news coverage. Michigan is steadily becoming a hot place for entrepreneurs and venture capital, and
U-M’s Stephen M. Ross School of Business has played a central role.

In 2001 there were seven venture capital firms in Michigan. By 2012 that number had grown to 20 firms, according to the Michigan Venture Capital Association (MVCA).

Graduates of U-M, Michigan State University, and Wayne State University — which comprise the Michigan University Research Corridor — have started or acquired businesses at double the national average rate among college graduates since 1996.

These figures may surprise some, but not those at U-M Ross who have worked for decades to build a strong base of entrepreneurs and venture capital in Michigan.

“There’s much more going on here entrepreneurially than the rest of the country realizes,” says Ross Professor David Brophy, director of the Center for Venture Capital & Private Equity Finance and founder of the Michigan Growth Capital Symposium. “An image takes a long time to change.”

But changing it is, gradually, and Michigan has stepped to the forefront since 2008, says Kelly Williams, group head and managing director of the Customized Fund Investment Group, which manages funds in Michigan (including the $450-million Venture Michigan Fund). The VMF, which invests in other venture funds, is chaired by Tom Kinnear, Ross School professor and former longtime director of the Samuel Zell and Robert H. Lurie Institute for Entrepreneurial Studies (ZLI).

“In every category, Michigan has outperformed,” says Williams. “Michigan is attracting more capital, creating more companies, and getting more deals done. It’s a testament to the fact that investors are recognizing good opportunities in the state.” 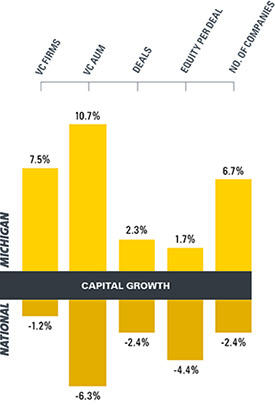 Growing entrepreneurship is a major goal of the state, and the Michigan Economic Development Corporation (MEDC) is seeing results.

The MEDC offers millions in grants and loans to in-state ventures, often working through venture capital and private equity partners.

Paula Sorrell, managing director of entrepreneurship and innovation for the MEDC, sees a wide range of startups in the state, including medical devices, biotech, IT, and advanced materials.

And it’s picking up. For example, the MEDC pre-seed fund started in 2006 and sees about the same number of deals every year — 10 to 11.

“We thought maybe the investment review board members were being easier on companies who submitted requests for funds, but they are actually being increasingly tougher,” Sorrell says. “There’s just a growing interest in this space and it’s really exciting. Also, we’ve seen an increase in angel investors providing matching funds in the pre-seed investment space.”

What’s driving the change? Necessity, for one. The automotive industry employs far fewer people than it did even in recent decades. Other big employers, such as Pfizer, drastically cut jobs in the state. That left a lot of skilled people with the time and need to pursue new ventures.

Michigan also has a wealth of research from U-M and others, as well as leadership that puts a priority on commercializing it. Further, current students and recent graduates see entrepreneurism as a way to control their destinies.

“The state has a more entrepreneurial attitude now,” says Kinnear, the D. Maynard Phelps Collegiate Professor of Business Administration and professor of marketing at the Ross School. “The general decline we observed in the recent recession stimulated a lot of people to see that all of this great research has commercial application, and we have an obligation to develop it.”

Making Michigan a good home for entrepreneurs also took a long time and much effort by the private sector, the state, and universities. The University of Michigan has made entrepreneurism a strong focus.

Ross and the Zell Lurie Institute recently were ranked No. 1 nationally for graduate entrepreneurial education by the Princeton Review and Entrepreneur magazine, which marks the fourth consecutive year the school has been in the top five.

The focus at Ross is business development — how to take an idea or invention and make it into a viable company.

“We carve out the business formation piece of the entrepreneurship puzzle,” says Ross Dean Alison Davis-Blake. “How do you take the capital and the idea and make a robust business out of it? That’s the takeaway from the U-M Ross education that has proven to be a key factor of success.”

The entrepreneurship ball at Ross got rolling in the early ’70s, and has picked up speed ever since. The school offered its first entrepreneurial management course in 1971, and created an entrepreneurial course track with a suite of classes in 1975. In 1979, Brophy founded the Michigan Growth Capital Symposium, which has become a national event.

In 1999, a $10 million gift from Sam Zell, AB ’63/JD ’66, and Ann Lurie established the Zell Lurie Institute to lead and organize teaching and research around entrepreneurship.

It also hosts major entrepreneurial events and the Michigan Business Challenge, and offers Dare to Dream grants for student startups. Ross’ ZLI and the U-M College of Engineering joined forces to create TechArb, a startup incubator for U-M students.

Most recently, Ross and the College of Engineering graduated the first class of Master of Entrepreneurship candidates, now a joint degree between the two schools.

In fact, entrepreneurial courses, programs, and activities abound across U-M and are hosted at units such as:

“Across campus, we are encouraging students to experiment, to innovate, and to learn that failure is not a negative,” says U-M President Mary Sue Coleman. “We have a rich variety of programs and resources designed to nurture among our students the skills, the vision, the drive, and the willingness to take risks that are the hallmark of successful entrepreneurs.”

Putting the Growth in Growth Capital

When U-M Ross Professor David Brophy and a few others founded the Michigan Growth Capital Symposium 32 years ago, there was one thing to say to a startup seeking funding in Michigan: Good luck.

You could count the number of venture funds in the state on one hand.

“At the time, few startups stayed in the state or even made it because there was not much in the way of funding,” Brophy says. “So the idea for the symposium was direct. We just wanted a program where we could gather up companies that seemed to have value, and we would invite investors from around the country to come in and see what they thought. I thought it might last a few years.”

What started as a small gathering is now a national, two-day event that attracts nearly 500 attendees annually. Financiers and entrepreneurs connect and get deals done.

“It’s created a lot of good energy, received great state support, and we’re wrapping the ball of twine more tightly as we go along,” Brophy says.

Successes near and far

The U-M Ross approach to entrepreneurism is making a mark not only in Michigan, but all over the world.

Grace Hsia, BSE ’12/MsE ’13, used several U-M resources to get her company, Warmilu, off the ground during her time as an engineering student (and later as a Master of Entrepreneurship student). Warmilu is developing a low-cost, non-electrical warming blanket for premature infants in developing countries. The heat technology has undergone pilot clinical trials in Bangalore, India, and is ready for beta-trial in emergency medical transport here in the U.S. Warmilu is in the product beta-test and fundraising stage.

In addition to school resources, Hsia also engaged with Ann Arbor SPARK, a business incubator, for its entrepreneur boot camp. She quickly discovered it takes more than an idea to get a business off the ground.

“The school gave us a laboratory to practice entrepreneurship safely,” she says. “Our company would not have grown as quickly and wouldn’t have been as focused if we hadn’t gone through these programs and if I hadn’t completed the Master of Entrepreneurship.”

Hsia also found she could launch a business in Michigan, something she wasn’t sure of a few years ago.

“Everything is here,” she says. “The capital, talent, mentorship, and a great entrepreneurial social scene where people are willing to talk to you and help. And for us, we’re close to manufacturing resources. There’s a very supportive network here and room for exciting growth.”

Meanwhile, John Pollard, MBA ’93, followed the “Go west, young man” advice after graduation and worked for Microsoft across a number of businesses, both established and cutting-edge. But the entrepreneurial bug bit him eventually, and he founded Jott Networks. The startup was at the forefront of smartphone voice-to-text technologies, and the founders and investors were happy when Jott was bought by Nuance Communications.

Looking at Michigan, Pollard says the informal meetings with other like-minded people are a critical part of building a strong entrepreneurial base.

“It’s lonely being an entrepreneur sometimes, so it’s invaluable talking to people who get what you’re doing and the risks you’re taking,” he says. “Peer support and mentoring are very important. Those informal networks help entrepreneurs succeed — it’s connective tissue for resources you didn’t even know you needed when you just had an idea. You need judgment-free feedback on ideas, and help finding grade-A people who can handle startup risk. It’s huge in Seattle and it looks to me that it’s developing in Michigan.”

Praveen Suthrum, MBA ’04, co-founder of NextServices Inc., says the combination of Ross’ entrepreneurial programs and the network helped demystify the startup world. NextServices, based in Ann Arbor and Mumbai, India, is a healthcare technology and management company Suthrum began as a student startup.

“When I started at Ross, I felt that starting a business was a very difficult thing,” he says. “It was a big deal in my head. But having gone through so many experiences, both in school and with my own projects, I came away not thinking about the difficulties. I just did it.”

One thing Suthrum learned was that technology has advanced and fundraising has changed to the point where it’s easier to start a business than in the past.

“I think those are two big reasons why more people are starting businesses,” he says. “Some of these technologies that allow for a virtual workforce and things like crowd funding are becoming much more readily accessible.”

While the recent surge in entrepreneurial activity is good for the state, it’s not time to declare victory. There’s still a lot to do to keep entrepreneurism a vital part of Michigan’s recovery.

“We can’t have any contentment because the auto industry has recovered,” Kinnear says.“We need to keep commercializing the research done here. We need to keep getting in front of people to let them know this is an exciting place to be an entrepreneur.”

Brophy says storytelling is a key part of the drive.

“We bury our good news,” he says. “We have to be careful not to get ahead of ourselves in claiming this or that, but reporting our success stories, like new companies getting funded and the deals that happen, should be a priority.”

Suthrum says the infrastructure of schools and the state is important, but having forums and places where enthusiastic people can form relationships will keep the flame burning.

“I’ll never forget when I met a former astronaut in Ann Arbor,” he says. “He talked about his experiences in space. He’s an entrepreneur now. He said the only thing that comes close to the level of excitement of being in space is being an entrepreneur.”

This story comes courtesy of the Fall 2013 issue of Dividend, the alumni magazine of the Ross School of Business.