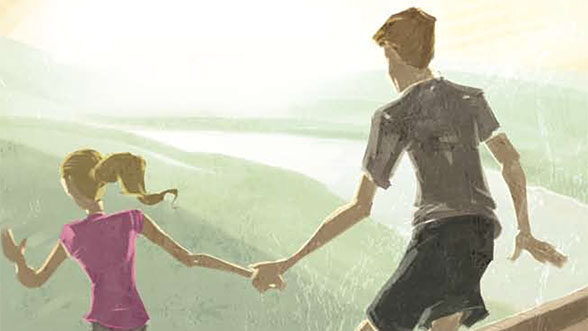 In his home office in a tastefully restored, cozy English Tudor in the historic Ives Woods neighborhood of Ann Arbor, there’s a photo of Vic Strecher’s daughter, Julia, tucked discreetly to the right of his desk. Pictured with her sister, Rachael, she has an ear-to-ear smile. Her bright blue eyes are twinkling. She was nine years old when the photo was taken and had just received her second heart transplant. She received her first at the age of 14 months on Valentine’s Day, after a chickenpox virus destroyed her heart. But transplanted hearts have short shelf lives. Four years ago, when Julia was 19, her heart stopped beating. 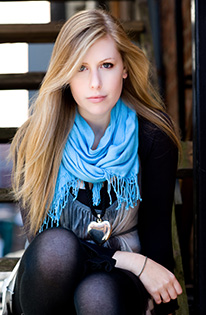 The loss of a child could cause any parent to feel eternally defeated — and it almost hijacked the will to live for Strecher, a professor and director for innovation and social entrepreneurship at the University of Michigan School of Public Health. But instead, he went on a journey that led him to turn loss into a mission: to help others live the fullest life.

Knowing his time with her was limited, Strecher defined his purpose as helping his daughter “lead a big life.” They traveled the world together, riding elephants in Northern Thailand and paragliding in the Rocky Mountains, jumping off a 30-foot-tall boulder into a pool of water. But that purpose died with Julia.

Three months after she passed away, he retreated, alone, to his Northern Michigan home. “I just didn’t care about living at all,” he says. “I’d lost my way.”

At 5 a.m. one morning, after seeing Julia in a dream, Strecher began kayaking, surrounded by nothing but water and the rising sun.

“I just started sobbing out there and I felt Julia come into me,” he recalls. “She said, ‘You’ve got to move forward, Dad.'” Later, he realized this occurred on Father’s Day.

At that moment, Strecher decided to help others find a purpose and meaning he finds lacking in a self-centered society that celebrates overconsumption and excessive vanity.

“I’m a scientist, so I made it a point to learn more about the process I was going through. I tried to become more resilient as a result of this traumatic event,” Strecher says.

He spent six months reading books by philosophers. He pored over more than 200 scientific journals. There he found many compelling studies demonstrating that those living with a stronger purpose are better able to change unhealthy behaviors, allowing them to lead a higher quality existence. Strecher’s eyes light up, childlike wonder and enthusiasm brimming in his voice, as he discusses research he discovered that showed a link between having a purpose and reductions in risks for strokes and heart attacks. One study found that people with a strong purpose in life were 2.4 times less likely to get Alzheimer’s disease in their later years. This is all captured in his three-year research effort, a new graphic novel, On Purpose. 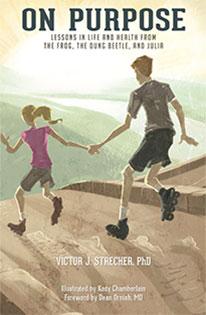 Strecher’s goal is to help people make positive changes in their lives that will ultimately benefit their physical and emotional health. He’s formed a nonprofit, DungBeetle.org, designed to promote activities related to finding one’s purpose.

Most current models of behavior change use scare tactics to motivate people into making the right decisions, like “stop smoking because it could kill you,” Strecher says. He favors an alternate model.

“Rather than anchoring for changing our motivation around death and disease, we should anchor it around a purpose in life,” he says.

That shift could lead to people stop smoking and drinking, for example, since those habits don’t enhance the vitality needed to achieve one’s purpose. That same shift could prompt someone to manage their depression so they have more energy to achieve their purpose.

Strecher decided to avoid writing what he saw as a formulaic self-help book, instead opting for a guide that can be read in an hour. On Purpose features vivid, cartoon-like illustrations that he describes as “playful,” instead of scholarly and academic — thus accessible to a wider audience. This format allowed him to unwrap his personal narrative with a bigger self-help story.

Strecher hopes a free, downloadable app (available on iTunes) will help anyone find their purpose. The app follows a simple plan:

Step one:  Identify your core values that best represent who you are. One way to think about this is to decide what you’d like written on your tombstone. Then, rate how important each value is to you.

Step Two: Decide on a brief purpose statement that’s right for your life. Strecher says the most meaningful purposes are those that are transcendent. Running a marathon to raise money for charity is a more effective purpose than simply running a marathon, he notes.

Step Three: Align your life with your goals. A purpose need not be lofty, Strecher points out, citing a custodian’s purpose: to maintain a clean and safe environment for students. You can determine your alignment with your purpose by rating a series of behaviors related to disease, death, and energy levels. They are: sleep, presence or mindfulness, physical activity, creativity, and eating well. By rating each of these behaviors on a daily basis, the app helps you to determine how well aligned you are between the way you’re living your life and your purpose. After reviewing 10 days of data, the app provides you with information on which of the behaviors you need to engage in more to better achieve that purpose.

Strecher’s own purpose is to help more than one billion people find their purpose and to teach all of his students as if they were his own child. That’s pushed him to engage in healthier behaviors. He meditates every day, walks instead of driving his car to work, and is trying to figure out how to sleep better. This allows him “more energy and vitality” to work on those purposes. Striving to achieve a meaningful purpose could be a superior model for health care reform, since it could better motivate people to shift to a healthier lifestyle, he says.

But he hopes his “creative trauma narrative,” in addition to providing self-therapy, will help others as well. That’s actually already occurring. Those who suffered traumatic experiences have told him “how meaningful it was in helping them become more resilient.”

And he’s decided how he wants his tombstone to read: “Helped many people find their purpose. Cool dude!”