The Screen Actors Guild awards have been announced, the Foreign Press has had its say at the Golden Globe Awards ceremony, the New York Film Critics Circle has spoken, and the American Academy of Motion Picture Arts and Sciences’ members have delivered their little golden men to the March 2 Oscar recipients.

To broaden the scope of the awards season, I’d like to add a list of citations that move beyond mere “blanket” award categories — i.e., Best Picture, Best Actor, Best Film Editing, etc. — toward smaller, but nonetheless unforgettable screen moments within last year’s feature-length drama films, notably memorable scripting and production moments. Plus a moment of import for the movie house itself.

I’ll begin with voice-over narration since that’s often the first thing one hears at the beginning of a film. The old scriptwriting axiom used to be that voice-over narration was a cop-out — a cheap, easy way to articulate character and plot rather than through artfully devised dramatic action. That idea was put to final rest a long time ago.

Think of The Shawshank Redemption (1994). Would that film have become the classic that it is now without Morgan Freeman’s quiet, reflective voice-over narration? And before that there was William Holden as Joe Gillis in Sunset Boulevard (1950) narrating from the grave, so to speak, since his dead body is seen at the beginning of the film floating face down in the swimming pool of silent screen star Norma Desmond (Gloria Swanson). 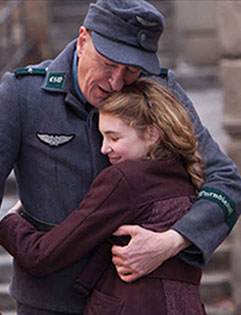 A citation for inventive 2013 voice-over goes to The Book Thief, a WWII film whose narrator isn’t entirely unlike the one in Sunset Boulevard. The narration is spoken by an unseen character who identifies himself as “Death.” The voice floats down from the heavens, an all-observing spirit who can comment on events in the drama others have not seen and who can predict, ominously, tragic events before they occur. “Death” represents a classic example of the omniscient first-person narrator, in this case one who projects ironic and dignified commentary on the sad events in a small German village in the early 1940s.

On a lighter note in the scripting department, citations go to The Secret Life of Walter Mitty and American Hustle for top-notch running gags. The gag in The Secret Life Of Walter Mitty comes in repeated cell-phone callbacks from an eHarmony operator seeking to help Mitty fine tune his online dating profile, even as he traverses the globe.

Even better is the dialogue-oriented running gag in American Hustle that develops in a story told by FBI boss Stoddard Thorsen (Louis CK) to federal agent Richie DiMaso (Bradley Cooper). Thorsen’s story is about ice-fishing as a boy in Michigan with his father’s warnings about the danger of going onto the ice too early in the season. Sensing a metaphorical “lesson” in the tale, DiMaso interrupts his boss but in later scenes continues pestering Thorsen to finish the story.

Also in scripting, let me cite two priceless single lines of dialogue: First, the brazen Kate Grant (June Squibb) in Nebraska, standing in a cemetery before her deceased sister-in-law’s tombstone and declaring “What a whore!” Number two: Irving Rosenfeld (Christian Bale) in American Hustle, with real artistic flair, describing his wife Rosalyn (Jennifer Lawrence) as “the Picasso of passive-aggressive karate.”

Finally in scripting, what was the most product-brand-infused film of 2013? The Secret Life of Walter Mitty wins this one, hands-down, with product displays and corporate mentions for Papa John’s Pizza, Cinnabon, McDonald’s, and eHarmony.com.

Two instances of terrific camera composition stand out for me in the films of 2013.

First: In the yacht collision-at-sea survival film All is Lost, the shots of the film’s sole character (Robert Redford) — taken from both front and rear camera positions — are made consistently at eye-level. This composition provides a sustained objective point of view and becomes the primary means of engendering an intense and compelling observational relationship with a character who must move diligently from one survival task to the next. The viewer’s attention remains riveted on the action, a brilliant visual strategy for a one-character, dialogue-free film.

Second: In motion-picture storytelling, two shots with identical composition elements and matched camera framing can be used as a means of linking past and present. This visual linkage occurs in the poignant  comedy-drama Philomena. Early in the film young Philomena (Sophie Kennedy Clark) peers in horror through a window as her three-year-old son is led away from an Irish convent for adoption in America. The shot is composed as a tightly framed rectangular view of the small iron-barred window. Philomena is “imprisoned” in closeup behind it.

In an identically composed shot near the end of the film, 66-year-old Philomena (Judi Dench) stares through the same barred window when she returns to the convent in search of her “lost” son. The compositional technique here displays the motion picture medium’s affinity for creating powerful Proustian moments of mental and emotional depth.

The films of 2013 continued to show off the impressive role in filmmaking played by computer-generated-imagery (CGI) effects.

In The Hobbit: The Desolation of Smaug, CGI visual effects were on full display in the Lonely Mountain sequence where Bilbo Baggins confronts the dragon, Smaug. The dragon’s sinuous motion-capture screen movements were choreographed by CGI animators for stunning 3-D compositional impact. Benedict Cumberbatch was magnificent in voicing the growling, intimidating beast. 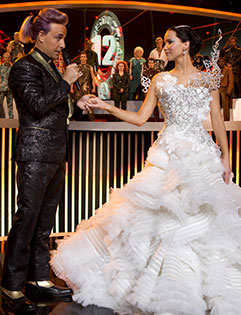 LED instruments — devices which light up to display visual information when voltage is applied — are now widely used for theater and event enhancement, for example for the color and light displays at the opening and closing ceremonies of the 2012 London Olympics. LED usage continued to make its way into 2013 motion picture production. Memorably, the pulsating abstract background images that appear in the stage interview sequence of The Hunger Games: Catching Fire were achieved with LED displays. The characters were filmed on the interview stage against a green-screen background and the brilliantly abstract LED imagery was composited digitally behind the live-action interviews.

Even more impressive: In Gravity thousands of LED lightbulbs were used to simulate outer-space color and light changes, light ostensibly emanating from the earth, sun, moon, and stars. CGI artist-technicians developed a system for controlling the LED lights manually and displaying them within a virtual “light box” which was used for capturing Sandra Bullock’s screen movements. The imagined outer-space environment displayed in Gravity gave proof of just how far LED/CGI visual-effect artistry has come in the past decade.

In conclusion, I must give a nod to an historic moment in film projection. At the end of last year, Paramount Pictures was the first major Hollywood studio to decide it would no longer ship movies on 35mm film to theaters in the United States. In 2013 less than 10 percent of the 40,000-plus U.S. movie houses had not yet converted for digital projection, mostly small-town venues unable to afford a conversion rate that is in excess of $100,000.

The rapid installation of digital projection systems between 2010-13 was spurred largely by the increasing number of feature animation films and big-budget action thrillers that were being produced in stereoscopic 3-D formats. Digital projection is required for screening a contemporary 3-D film. This historic moment points out how digital production and digital projection are now technological buddies in the business of making and showing movies.