In the previous two Health Yourself columns Professor Victor Katch discussed proteins and lipids. Here he aims to provide a basic “primer” on sugar (more properly termed carbohydrate), perhaps the most misunderstood nutrient among the macronutrients. In next month’s column he will discuss the many controversies regarding how much and what kinds of foods you should be eating to “health yourself.”

A brief history of sugar

Most likely, the first use of sugarcane by humans was to chew it to obtain its “sweet juice.” Its use as a confectionary is legendary and widespread throughout history, as sugar has found its way  into almost every type of packaged and processed food we encounter today.

Less known perhaps are sugar’s medicinal properties. Evidence of sugar as a healing agent appears as far back as 500 BC in Sanskrit texts from northern India. Healers applied sugar paste to infections and wounds to draw out moisture, dehydrating and ultimately killing bacteria.

Honey, in fact, has a long history in healing; its salutary effects stem primarily from its antimicrobial properties. Research documents honey’s function as an anti-inflammatory agent, reducing both swelling and pain. Honey also has shown to be extraordinarily effective in treating wounds, burns, and surgical incisions, and is even known to reduce scarring. In addition, honey functions as a moisturizer, a treatment for sunburn, and an all-purpose skin softener.

Sugar’s many uses spread from northern India eastward to China and (along with the cultivation of sugarcane) westward into Persia, eventually reaching the east coast of the Mediterranean about 600 AD. The Portuguese in the 15th century introduced commercial sugarcane production (or “sweet salt,” as sugar was known) on nearby Mediterranean islands (especially Madeira) as a means of financing commercial enterprises in the East Indies.

In subsequent centuries, sugar became intimately associated with European colonization of tropical portions of the New World. By the 1700s the Caribbean emerged as the largest source of the world’s sugar supply. The trade of sugar, mostly in its liquid form of molasses, originated from the Caribbean to Europe or New England, where it was distilled into rum.

Profits from sugar sales were used to purchase manufactured goods, which were then shipped to West Africa, where they were bartered for slaves. The slaves were then brought back to the Caribbean to be sold to sugar planters. Profits from the sale of slaves were then used to buy more sugar, which was shipped to Europe, etc. By 1750 sugar surpassed grain as the most valuable commodity in European trade. The demand for labor that it created led to the transatlantic slave trade that carried millions of Africans to the Americas.

Carbohydrates classify as monosaccharides, oligosaccharides, or polysaccharides. It is vital to understand differences between these types of sugar. Most people are in a perpetual state of confusion, and blame sugar for everything from their sagging abdomens to erratic mood swings. This often results in bizarre eating practices (read diets).

Here’s what you need to know about the different types of sugars.

Polysaccharides represent another type of carbohydrate and are described by linkage of three or more (up to thousands) mono- and disaccharide molecules. Polysaccharides include both plant and animal sources.

A well-nourished 80-kg man stores approximately 500 g of carbohydrate. Of this, muscle glycogen accounts for the largest reserve (approximately 400 g), followed by 90-110 g as liver glycogen (highest concentration, representing 3-7 percent of the liver’s weight), with only about 2-3 g as blood glucose. Each gram of either glycogen or glucose contains approximately 4 calories (kcal) of energy. This means the average person stores about 2,000 kcal as carbohydrate — enough total energy to power a 20-mile continuous run at high intensity.

Not all carbohydrates are physiologically equal: The glycemic index

Absorption rates of different carbohydrate sources possibly explain the link between carbohydrate intake and diabetes, and excess body fat. Scientists classify foods into high- and low-glycemic index foods, determined by how quickly the food digests and raises blood-sugar levels, two hours after ingestion. Values are compared to 50 g of pure glucose, which has a glycemic index value of 100. The figure below shows examples of a few high- , low-, and moderate-glycemic foods. 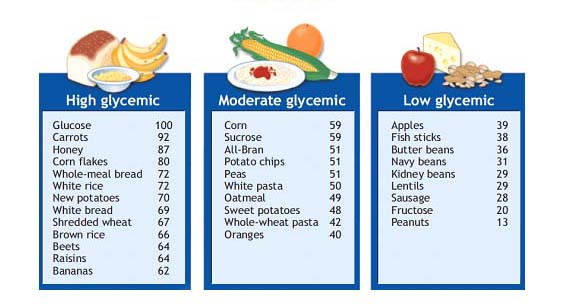 The average American currently consumes 22-28 teaspoons of added sugars daily (equivalent to 350-440 empty calories per day; and about 70 lbs. per year). Most of this sugar comes in the form of high-fructose corn syrup and ordinary table sugar (sucrose). The rapid surge in blood glucose after consuming certain refined, processed starches and simple sugars (high glycemic) has three effects:

While high-glycemic foods are OK in moderation, it is usually best to opt for low- or moderate-glycemic options whenever possible. And, it is a good idea to minimize sugary beverage intake, including fruit juices, to lower the risk of obesity, diabetes, heart disease, gout, and dental cavities.

Too much sweet stuff, period 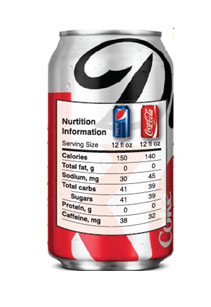 Nearly half of Americans over age 2 drink at least one sugary beverage every day. Some 70 percent of boys ages 2-19 drink sugary beverages daily. One fourth of Americans consume 200 or more calories daily from sugary soft drinks, and 5 percent slurp at least 567 liquid calories each day. That 5 percent population is consuming what amounts to 1,460 cans of soda per year. And at 207,000 calories, this theoretically equates to 60 pounds of body fat! For caffeine junkies, those 1,460 sodas contain about the same amount of caffeine (some 55,000 mg) as 367 tall, 12-oz. cups of Starbucks Caffe Americano.

The bottom line: Stay away from liquid calories!

For more physically active people and those involved in exercise training, carbohydrates should equal about 60 percent of daily calories or 400-600 g, predominantly as unrefined, fiber-rich fruits, grains, and vegetables.

During periods of intense exercise training, carbohydrate intake should increase to 70 percent of total calories, or approximately 8-10 g per kg of body weight.

Sources of nutritious dietary carbohydrate consist of plant polysaccharides, including fruits, grains, and vegetables. These “good sugars” come in a nutrient-dense package with none of the downsides of added sugars, and they perform valuable functions in the body. These include:

Energy Source. Carbohydrates primarily serve as fuel, particularly during intense physical activity. Sufficient daily carbohydrate intake is needed to maintain the body’s relatively limited glycogen stores. However, once cells reach their maximum capacity for glycogen storage, excess sugars of any kind convert to and store as fat. This interconversion of sugar to fat (and protein to fat) for energy storage explains how body fat can increase when intake of dietary carbohydrates exceed energy requirements, even if the diet contains little fat.