Summer is here at last, and it came none too soon, many might say. The “heavy” winter that blanketed a large part of the country in recent months kept people huddled in the warmth of their homes, even as they might’ve considered venturing out to a local movie house. Now we’re approaching the “light” season where numerous franchise sequels, prequels, and spinoffs will seek to lure filmgoers back into theaters. 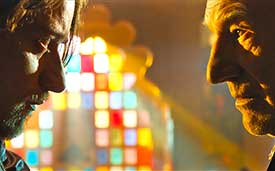 Consider this: To set the tone for summer movies, X-Men: Days of Future Past opened May 23. In case you lost count — as I did — that was the seventh film in the X-Men franchise. Later in the season, before the kids have to go back to school, they can catch another round of Teenage Mutant Ninja Turtles, those giant creatures who climb from their New York sewer abodes and perform all sorts of heroics. In case you lost count — as I did — the Ninja turtles have now aged 24 years since their original appearance in 1990.

So, what else might there be to look out for this summer? First off, several of cinema’s top-flight, long-standing directors have new films, some a bit of a surprise: Clint Eastwood has directed a screen version of the hit musical Jersey Boys (June 23), and Roman Polanski has directed a French version of David Ives’ Broadway play Venus in Fur (June 20). On July 25 Woody Allen takes us on another of his international romance tours with Magic in the Moonlight, set on the French Riviera in the carefree 1920s.

Also in late July is Jan Troell’s The Last Sentence, a political study of Sweden in the 1930s with issues of Hitler and Stalin’s Secret Union in play in the country. I became a devoted fan of Jan Troell — now 82 years old — when as a young film teacher I encountered The Emigrants (1971) and The New Land (1972), continuing epics about Swedish immigration to the U.S. in the 19th century. Troell is a master director who creates dramatic actions as objective correlatives to get to the heart of the story. I used his films as exemplary illustrations while teaching courses in screenwriting and motion picture production.

Another film of note: Master Builder (mid-July), a screen adaptation of Henrik Ibsen’s complex Norwegian drama, from Oscar-winning director Jonathan Demme (The Silence of the Lambs, 1991). I’m also looking forward to The Giver in mid-August. This is a science-fiction film based on Lois Lowry’s acclaimed young adult novel about a 16-year-old boy living in the future who is exposed to some of life’s deeper lessons. The director is Phillip Noyce, one of Australia’s finest, whose films include the classic Aboriginal drama Rabbit-Proof Fence (2002). Meryl Streep, always one to look forward to, appears in The Giver as the Chief Elder.

In addition to these “noted-director films,” there are a number of “social-problem films” among the summer’s more serious releases. In mid-June: I Am I, a drama about dementia and mistaken identity, and Test, a narrative like Dallas Buyers’ Club that personalizes the emerging HIV-AIDS crisis in the 1980s. Love is Strange (mid-August), is a film that follows a married, older same-sex couple (John Lithgow and Alfred Molina) forced to live apart after one of the pair loses his job.

In the anticipated foreign film category are two award-winning entries: A Coffee In Berlin (mid-June), a German “slacker” comedy that won several German “Oscars,” and A Five Star Life (mid-July), an Italian film about a woman who has a dream job living in and rating luxury hotels, but who finds that life on the domestic front has challenges that infringe on her enviable world. Margherita Buy, as the hotel critic, won Italy’s “Best Actress” award.

What about the nonfiction feature-length films? First, there are some very interesting developments in the documentary field. In early May a media business report (New York Times, May 5) announced that film documentarians are going to get their own television channel. That’s great news. Nonfiction filmmakers continue to turn out feature-length documentaries for release in movie houses, and in increasing numbers.

Earlier this year in Michigan Today (“Cinema: 2013”), I called attention to the huge upswing in the year’s production of feature-length documentaries. A record 151 titles were considered for the year’s Oscar which was awarded to 20 Feet from Stardom, the charming and revealing account of backup singers who remained anonymous but indispensable behind their star performers. This year’s documentary crop looks to be even larger: 40 films are scheduled for theatrical release over the four-month summer season.

But here’s why a custom television outlet is so encouraging: The media business article reported that box-office ticket sales for all documentaries released in theaters last year were nearly equal to the tickets Iron Man 3 sold in one day. Documentaries may have their day in movie houses, but their audience reach is minimal. The television channel, Docurama Digital Channel, will be a free, advertising-supported outlet that by July expects to have on-demand availability of more than 1,000 documentaries — older as well as contemporary ones. Chris McGurk, the executive behind the new channel, says its goal is to reach “an underserved audience.” Again, great news, not just for documentarians but for documentary lovers, as well. I hope it catches on.

In the meantime, which summer documentary releases look most inviting? In late June and early July come two about iconic journalist/critics. The title hints at the first documentary’s thematics — The Pleasures of Being Out of Step: Notes on the Life of Nat Hentoff. Hentoff, now 88, is a renowned music critic/columnist who also is well-known for his less than self-effacing political activism. This should be a titillating character profile.

The next is Steve James’ documentary about beloved Chicago-based movie critic Roger Ebert, Life Itself, from Ebert’s memoir of the same title. James has made a number of documentaries with Chicago subjects, notably the much-awarded Hoop Dreams (1994), about two African-American high school athletes who aspire to careers in the NBA. James is a potent filmmaker and I’m looking forward to his treatment of the late Ebert.

Other summer documentaries that appear intriguing: Ivory Tower (mid-June), a timely examination of the ins and outs of student-loan debt; The Sarnos: A Life in Dirty Movies (July), a look at the husband-wife Sarno team who collaborated on dozens of soft-core sex films; and James Cameron’s Deepsea Challenge 3-D (mid-August), a demonstration of the director’s affinity for water-based films (Piranha II, The Abyss, Titanic), which now leads him into the deepest depths of the ocean for a 3-D look at what’s down there.

As a whole, the summer movie season appears rather promising in its range of offerings.