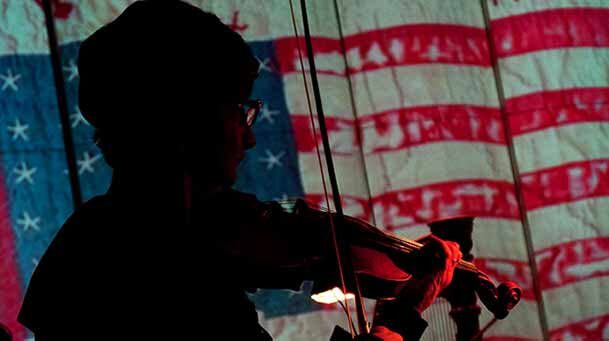 We know it so well, like the back of one’s hand, as the saying goes. But as we look at that hand, placed over the heart, we might be surprised to learn how little we do know about our national anthem, the song known as “The Star-Spangled Banner.” 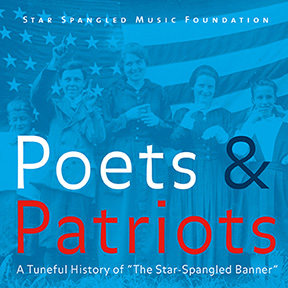 This double CD includes songs and instrumentals related to the history of the anthem, many never before recorded. See video performances.

On Sept. 14, 2014, the nation will mark the bicentennial of Francis Scott Key’s original lyric, set to an existing melody borrowed from an amateur musician’s club in London. No one would have been more surprised than Key by its ascent to national honor, says Mark Clague, associate professor of musicology and director of research in the School of Music, Theatre, and Dance (SMTD).

Key was just one of many poets to set words to the jaunty melody by English church musician John Stafford Smith. His original intent was to celebrate America’s against-all-odds victory at Baltimore on Sept. 14, 1814. But it was Key’s skilled use of timeless imagery, notably the flag, that captivated the nation long after the battle. Two centuries later, the lyrics continue to articulate the relationship of individuals to sacrifice and freedom, citizenship and democracy.

“The story of the song is really something bigger – it’s about the power of music in our lives to help us figure out who we are as human beings,” says Clague. “Citizens of the U.S. – as well as visitors, immigrants, and foreign citizens living here – have some relationship to the nation that is articulated through patriotic symbols: the eagle, the flag, the anthem. These symbols delineate inclusion and exclusion; they serve as points of social negotiation. The anthem is something you have to actively perform. You have to use your voice, your body, your breath to give living resonance to this particular symbol. And it’s not an easy song to sing. It requires a commitment and a passion to pull off that wide range. As a result, it becomes a deeply personal expression. For that reason I think it’s incredibly powerful.”

Visit Banner Moments: The National Anthem in American Life at the Hatcher Graduate Library.
Clague, a nationally recognized expert on the anthem, recently released the double CD Poets & Patriots: A Tuneful History of “The Star-Spangled Banner,” comprising 37 historical iterations of the anthem, its precursors and parodies, recorded by SMTD faculty and students. A number of the CD’s tracks, never before recorded, accompany the online exhibit “The Banner Yet Waves” at the Smithsonian. Clague also manages the comprehensive website starspangledmusic.org, an educational partnership between the Star-Spangled Music Foundation and SMTD’s American Music Institute.

What follows are just a few fascinating facts about the history of “The Star-Spangled Banner” drawn from a recent interview with Clague.

In telling the history of the anthem, we tend to leave out certain facts – for example, that Key’s uncle and mentor was an officer in the British army, and that Key owned slaves. “That complicates things,” says Clague. “But for me, recovering this complicated history is part of my motivation. We are living with the same problems today that Key grappled with in the song: states’ rights vs. federalism, foreign policy vs. domestic policy, the role of religion in public life. Later parodies on Key’s lyric address issues of slavery, alcoholism, and north vs. south before, during, and after the U.S. Civil War. It’s worth remembering the complexity of the past because it helps to explain the complexity of the present. These issues are not radical and new. They are the fundamental and perpetual questions our democracy has to grapple with: Who is American? Who merits civil rights? Who is running this place and for what purpose?”

There is no official version of the “Star-Spangled Banner.” 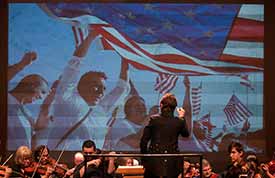 Laura Jackson, DMA ’05, conducts the premiere performance of the patriotic cantata “Chesapeake: Summer of 1814,” by composer Michael Gandolfi with the Reno Philharmonic and Chorus. (Image courtesy of the Star Spangled Music Foundation.)

In fact, the national anthem is itself a parody song. Original composer Smith wrote the melody in 1775 or 1776 to accompany the “constitutional anthem” of the Anacreontic Society, an amateur musicians’ club in London. The society often hired professional singers to perform its club song at their meetings. Those same singers would recast the song for mainstream theater audiences and the tune would next be adopted as a vehicle for parody. This “broadside ballad” tradition would continue for decades, ultimately bringing the melody to the United States, where lyricists transformed the tune into everything from a drinking song to a eulogy to George Washington. Its melody animates some of the first presidential campaign songs, used by John Adams and Thomas Jefferson. William Henry Harrison had 14 separate lyrics sung to the tune for his 1840 campaign.

During the Civil War, both sides claimed Key’s song as their own.

Some in the Confederacy claimed Key as one of their own and swore to preserve his song from Yankee abuse. Yet the “Banner” ultimately evolved into a solid Northern song, because it was so closely associated with the flag and Union. While Northern poets wrote extra verses to augment Key’s text, Confederate parodists reworked the song to ridicule the North with such offerings as “The Flag of Secession.”

Women played a major role in the anthem’s adoption.

The Daughters of the War of 1812 were major advocates of the 1931 act of Congress that President Hoover signed, declaring “the song known as ‘The Star-Spangled Banner'” to be America’s national anthem. As causes go, this was a safe arena in which women could engage in political activism in the early 20th century, Clague says. 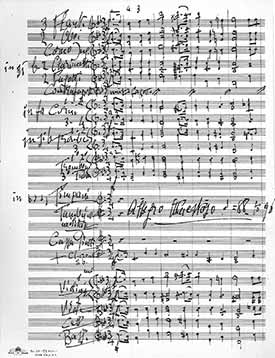 First page of Arturo Toscanini’s arrangement of “The Star-Spangled Banner” (1943, rev. 1951), held in the archives of the New York Philharmonic.

After a 1943 radio performance with the NBC Symphony Orchestra, the Italian conductor announced he would sell his unpublished, handwritten score to the person who purchased the most U.S. war bonds. Employees of an insurance company in Kansas City acquired the score for $1 million in bonds (approximately $13 million today). In 1951 a later copy was donated to raise funds for the New York Philharmonic. A benefactor purchased the Toscanini score and donated it back to the Philharmonic, where it has remained, unpublished and unperformed, until now.  Clague recently worked with students in U-M’s Undergraduate Research Opportunity Program to translate Toscanini’s score into a clean, modern edition. After its July 4 premiere by the New York Philharmonic, this new edition will be available for free at starspangledmusic.org.

The anthem has four verses, but we sing only one.

How do we know Key wrote these star-spangled lyrics specifically for this Anacreontic melody? Each verse contains eight lines (double the norm) and nine rhymes. It is not some random poem that happens to fit with the tune. Key’s third verse, critical of the British, was the first to be dropped during World War I when our former enemy became our trusted ally. Key had also used the tune for an earlier patriotic song—“When the Warrior Returns”—written in 1805 in honor of naval hero Stephen Decatur Jr.

Playing the anthem during athletic events is good for business.

During World War I, when a number of athletes had been drafted into military service, professional leagues used the anthem to cast a patriotic ethos around sports. It was essential to their survival, Clague says. “It was not a disinterested act from a commercial standpoint.” After World War II, the NFL commissioner promised President Roosevelt the league would continue to play the anthem at every game during peacetime. He was able to make good on that promise, thanks to advances in recording technology and public address systems. No longer was a live band or organist required for every anthem performance, as it had been during World War I.

In 1968 the Detroit Tigers were competing in the World Series. Feliciano, an American singer-songwriter from Puerto Rico, set Key’s traditional lyrics to his own original melody. Clague casts the moment as Feliciano’s sincere expression of patriotism and gratitude to the country for his artistic success. However, what some people heard was a “foreign” musician violating the anthem, and Feliciano’s record sales dropped precipitously. “I find the variant versions where a singer is giving voice to their own citizenship to be really intriguing,” Clague says. “Changes communicate an artist’s relationship to the country, and usually their love of the country. That’s the magic – the emotional power of music.” 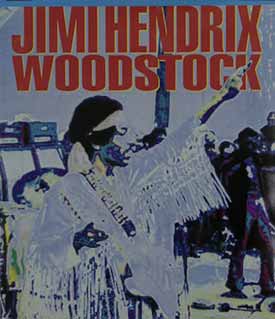 Hendrix’s 1969 Woodstock performance of the anthem was the mid-point in a two-year fascination with the song, Clague says. Though the performance is often characterized as a symbol of protest, it is simultaneously an expression of optimism and patriotism, he says. Optimism, because this was a moment of countercultural harmony in which the nation’s youth came together to express their citizenship in a nonviolent way. And patriotism, because Hendrix was a veteran of the 101st Airborne Screaming Eagles. He was using the moment to recognize friends and comrades in Vietnam.

For all its ecstatic, psychedelic improvisations, Hendrix stays true to the original, Clague says. He plays all the notes and he plays them all in order and in tune. When he takes off from the melody, he’s not being destructive; he’s actually illustrating “the rockets’ red glare” and “bombs bursting in air.” And when he interpolates “Taps” just before the lyric’s question: “Oh, say does that star-spangled banner yet wave,” he is connecting sacrifice and freedom. “It’s really a thoughtful and artistic composition as opposed to an offhand improvisation,” says Clague.

The anthem has been translated into several languages.

“I have seen versions of the anthem in Cherokee, Navajo, Yiddish, Norwegian, Czech, German, Hebrew, Spanish, and even Latin,” Clague says. “Translating the anthem was a way that immigrant communities learned about the nation – but in their own language, rather than English.” Spanish translations date back to 1918, he notes. The U.S. government used to publish these translations as a way to welcome new immigrants into this country and to forge new alliances across our borders.

Sept. 26: “Singing the Self into Citizenship: How Performance Transformed a Star-Spangled Song into the U.S. National Anthem,” by Mark Clague. (Burton Memorial Tower, Room 506, 5 p.m.)

Dec. 5: “This Is America: Jimi Hendrix’s Reimaginings of ‘The Star-Spangled Banner’ as Social Commentary at Woodstock and Beyond” by Mark Clague. (U-M Hatcher Graduate Library, 5 p.m.)