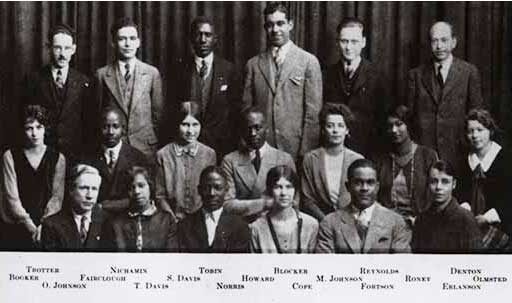 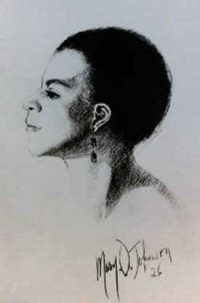 It began at the lunch hour one day in the fall of 1925, a time when there were perhaps 60 black students out of 10,000 at the University of Michigan.

That day an African-American student named Lenoir Bertrice Smith had only a short break between classes near the Diag. There was no time to run home for lunch, and she hadn’t brought anything to eat. So she and a white friend, Edith Kaplan, went into a restaurant by Nickels Arcade and sat down for a quick bite.

Finally a bus boy came to their table and set a pile of dirty dishes on the table between them.

Smith looked at the dishes, then rose from her seat.

Before arriving at U-M, Kaplan had never spent time with black people, so it took her a moment to understand what was happening. Then she looked at Smith, and “trembled with rage when I saw her face,” Kaplan recalled long afterward, “and I knew that the dirty dishes had not been accidental.”

The two women went to see Oakley Johnson, a young instructor in the Department of Rhetoric. Smith was enrolled in Johnson’s class and knew he was sympathetic to the situation of black students. The women asked him what might be done.

Johnson took them to see John R. Effinger, dean of the College of Literature, Science, and the Arts. They hoped Effinger might bring the University’s influence to bear on Ann Arbor restaurant owners who refused service to African-American students. 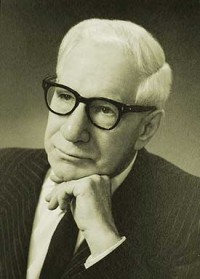 According to Johnson, Effinger’s response was “correct, cold, and unsympathetic.”

“Why, I’m very sorry about this,” Johnson recalled Effinger saying, “but, you know, the University has no control over the businessmen of the city. Our domain ends at the edge of the campus. We can’t do anything at all.”

“But can’t you express the University’s desire that its students be treated properly?” Johnson implored. “After all, they’re students here, regardless of color.”

“No,” Effinger said. “My grandfather owned slaves in Virginia, but you mustn’t think I’m prejudiced. I would do something for you if I could.”

“He seemed to think we were demented,” Johnson recalled.

So the students and Johnson decided to do something for themselves. They recruited other students — mostly African-Americans but also a number of whites – and declared themselves the Negro-Caucasian Club of the University of Michigan. It may have been the first such group on any American college campus.

If not demented, they were certainly audacious.

“Not part and parcel of the school”

The first two African-American students had been admitted to U-M in 1868. But only a handful followed, and by the 1920s, blacks still comprised just a tiny fragment of the student body. By University practice and informal understandings, they lived in a segregated sphere, joining white students only in classrooms.

In that era only women lived in University dormitories – but not the six or seven black women enrolled at U-M. They lived in a boarding house arranged by the University. African-American men lived in one of three black fraternity houses, or boarded with black families. They were not served at the Michigan Union, nor were they allowed into University swimming pools or University-sponsored dances.

“The colored were not part and parcel of the school,” recalled Joseph Leon Langhorne, a black graduate of 1928.

In this atmosphere, the Negro-Caucasian Club sought approval as an official student organization. It was hard to come by. 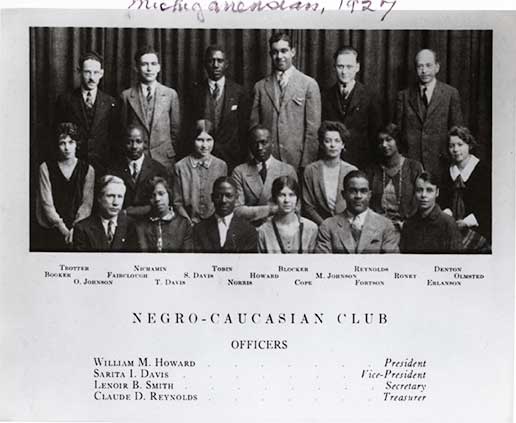 This image from the 1927 Michiganensian, showcases the founding members of the Negro-Caucasian club. (Image courtesy of U-M’s Bentley Historical Library,)

The faculty senate’s Committee on Student Affairs recognized the group as an official student organization for only one year, and only on two conditions: It must drop its stated purpose of working “for the abolition of discrimination against Negroes,” and “the name of the University of Michigan shall not be used in connection with the activities of the Club.”

With that cold send-off, the club began. Johnson served as faculty adviser.

One of the organization’s first activities was to distribute 100 surveys to white students with such questions as: “How many Negroes have you met other than your maid or butler?” and such true-or-false choices as: “All Negro men are drooling for the chance to rape white women.”  The responses, tabulated by sympathizers in the Department of Sociology, were predictably dismaying.

“We concluded that the problem was one of belief in the sub-humanity of Negroes and unfamiliarity,” Smith recalled later. “On this basis we decided to bring outstanding Negroes to the campus to show people that there were Negroes who were not ‘hewers of wood and carriers of water.’”

The first to be invited was the African-American philosopher Alain LeRoy Locke, a key figure in the black cultural awakening known as the Harlem Renaissance. Locke’s address in the then-new Natural Science Building had the intended effect among white students. Julius Watson, a black student from Detroit, remembered the reaction of a white teacher from Arkansas who was attending graduate school at U-M. “After [Locke’s] talk someone asked her if she was surprised,” Watson said, “and she remarked that she was really shocked because she did not dream that there was a Negro who could say so many things that she could not understand.”

Guests of the Negro-Caucasian Club included:
More speakers came, including the great activist and writer W.E.B. DuBois and the novelist Jean Toomer. Members of the club met with A. Philip Randolph, the labor leader who would organize the first march on Washington for civil rights; Frank Murphy, the liberal Detroit judge who would later defend minority rights as a U.S. Supreme Court justice; and Clarence Darrow, the fiery criminal lawyer who defended the black Detroit physician Ossian Sweet in the most celebrated civil rights trial of the era.

Johnson, who was not only a champion of civil rights but a Marxist and a member of the Communist Party, left U-M in 1928, his bid for tenure denied despite the backing of his department. The Negro-Caucasian Club continued until 1930 with another faculty adviser, then faded as the Great Depression took hold.

The members went their separate ways, many to distinguished careers. Because of her experience in the club, Sarita Davis gave up her plan to become a missionary abroad and instead became a social worker in the U.S. Lenoir Bertrice Smith — now Lenoir Smith Stewart — came back to Michigan for a master’s degree in the 1930s; from 1953-58 she was head of the serology section at University Hospital. K.T. Harden became dean of the medical school at Howard University. Armistead Pride became the longtime chair of journalism at the historically black Lincoln University. Edith Kaplan Ritter became an authority on ancient languages at the University of Chicago.

“We had ideas, feelings, aspirations”

“We decided to bring outstanding Negroes to the campus to show people that there were Negroes who were not ‘hewers of wood and carriers of water.’”
— Lenoir Smith Stewart
In 1969 club alumni gathered in Washington, D.C., for a reunion. Looking back at their time in Ann Arbor, what they remembered most were their own informal gatherings, usually at 620 Church St., the home of Oakley Johnson and his wife, Mary.

“We sat on the floor and talked and ate peanuts,” Lenoir Smith Stewart remembered. “We tried not to discuss the Race Problem, but everything else, in order to prove that we could – that we were not sub-human, that we had ideas, feelings, and aspirations.”

“The Negro-Caucasian Club at Michigan helped relieve the Negro student’s feeling of isolation,” wrote Armistead Pride, “and to give him some portholes onto campus life other than those of the classroom and the Michigan Daily.”

“For many of us this represented the first social contact with Caucasians which was of more than a casual degree,” wrote K.A. Harden.

White members remembered a fundamental change in their outlook.

“Because of those associations, I lost my black-white feelings,” Davis recalled. “Ever since, a Negro has been another human being to me.”