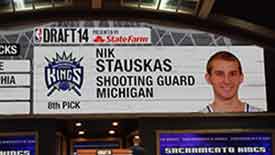 Stauskas was picked No. 8, one of three Canadians to go in the first round. (Image: Andrew Kahn.)

It’s Thursday evening, June 26, at the Barclays Center in Brooklyn, N.Y. NBA Commissioner Adam Silver steps to the podium, looks at a small sheet of paper, and announces, “With the eighth pick in the 2014 NBA draft, the Sacramento Kings select Nik Stauskas from Mississauga, Canada, and the University of Michigan.”

Stauskas had been tipped off moments earlier, but that doesn’t dull his excitement. He stands up and hugs his mom before executing an elaborate handshake with his dad that culminates in both raising their hands to their eyes, the same celebratory move Stauskas makes after nailing a clutch three-point basket. Stauskas puts on a Kings hat and takes the stage to shake the commissioner’s hand. Becoming an NBA lottery pick is a long shot, but Stauskas has officially made it. 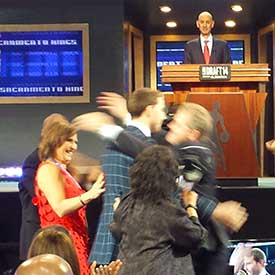 Stauskas secured his position in the league by making the big leap from spot-up shooter to all-around offensive force. After an impressive freshman season at Michigan, Stauskas stayed in Ann Arbor last summer and transformed his body, getting stronger and quicker. He was able to put the ball on the floor, get to the basket, and finish with regularity. The departure of Trey Burke and Tim Hardaway Jr., Michigan’s primary ball handlers, to the NBA in 2013 increased Stauskas’ opportunities to showcase those skills.

“Obviously he’s a good shooter but he can create his own shot and make others better,” says NBA Director of Scouting Ryan Blake. “He can work the pick and roll as an off guard or point guard and moves well without the ball.”

Stauskas also got mentally tougher from one season to the next. “My freshman year you saw a lot of times where if I started off cold I’d be cold for the rest of the game and it was like I wasn’t even on the floor,” he reflects. “This year I could pick myself up in the middle of games and get myself going.”

Just like Burke had done the year before, Stauskas capped those second-year improvements with a Big Ten Player of the Year award. 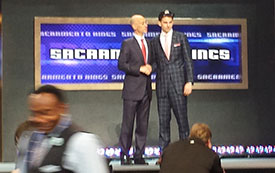 Before a three-game stretch in late January in which Michigan played at Wisconsin, against Iowa, and at Michigan State, all top-10 teams at the time, Paul Stauskas told his son, “If you can play the way you’ve played so far, there’s a really darn good possibility the NBA is in your horizon.” Stauskas went on to score 23, 26, and 19 points, respectively, for three Michigan victories.

“That was the first time, as far as the media goes, they started giving me NBA attention,” Stauskas says. “I said to myself, ‘If I keep playing like this for the rest of the year I think I’m going to have a chance to go.’”

After leading the Wolverines to an outright Big Ten regular season championship and coming one win shy of a second straight Final Four, Stauskas declared for the draft. In pre-draft workouts, his work ethic was on display.

“I’ve always had the mentality that you need to be a little bit different to be successful,” Stauskas says. “Even when I have a good game, I look at film and critique myself. Having that mentality makes you realize you’re never perfect and you can always keep working hard. I almost feel guilty when I’m not giving 100 percent. That’s just who I am. For some people it’s tough to work hard. It’s what I love to do.” 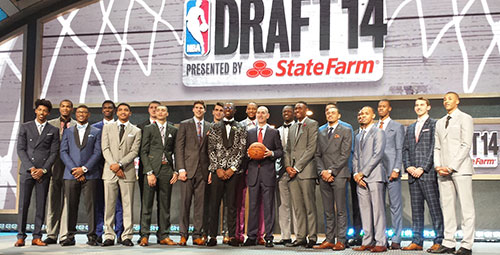 In interviews with NBA teams, Stauskas scored on personality as well. “He’s very easy to get along with and get to know,” says David Merritt, a former Michigan captain and the color analyst for Michigan radio. “He’s very friendly and can quickly establish connections and friendships.”

Even Michigan State’s Adreian Payne, a rival on the court, enjoyed rooming with him during pre-draft workouts.

And of course, in the words of fellow elite shooter and lottery pick Doug McDermott, Stauskas “shoots the crap out of the ball.” He honed his shooting stroke on a weather-resistant half-court playing surface in his backyard in Mississauga, a suburb just outside Toronto. In the winter, Stauskas would shovel the snow, put a space heater by the three-point line, and shoot. He started recording some of his shooting sessions and posting them on YouTube. In one clip he hits 70 of 76, including 46 in a row, in five minutes.

“He is one of the best shooters I’ve ever coached,” says Michigan Head Coach John Beilein. “In one of the first practices when he was here, he made 78 out of 85 threes in a drill that we do.”

It is that skill above all others that got him an invite to the NBA draft in New York along with 19 other prospects.

The night before the draft, Stauskas sleeps well in his midtown Manhattan hotel room. He attends a meeting with the other prospects the following morning and learns what to expect from the day’s events. Then it’s off to lunch with first-year commissioner Silver. 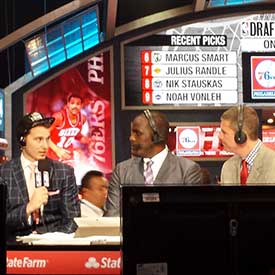 As he waits for the bus that will take the players to Brooklyn’s Barclays Center, Stauskas feels stressed out and overwhelmed. Media requests and scheduled events have consumed the past 24 hours. For the first time in the draft process, he is nervous. He just wants to know what city he’ll be going to.

Arriving at Barclays, the home of the Nets, in his navy blue window-pane suit, Stauskas poses for photos with the other prospects. His former teammate Burke, chosen by the Utah Jazz with the No. 9 pick last year, says hello. Stauskas takes a seat at his table, which is front and center in the “green room” area in front of the stage, with his parents, older brother Peter, Beilein, and his agent, Mark Bartelstein. The Stauskas family has watched the draft on TV for years and can’t believe they are sitting here. At 7:40 p.m. ET, Andrew Wiggins, who played with and against Stauskas in the Toronto area, is announced as the first pick. It is the second year in a row a Canadian has gone No. 1.

The Celtics and Lakers, two of the three teams Stauskas traveled to work out for, have the sixth and seventh picks. The Celtics take point guard Marcus Smart and the Lakers go with power forward Julius Randle. The Hornets, the other team that worked him out, hold the ninth pick, but the Sacramento Kings, at No. 8, are on the clock when Bartelstein’s phone rings. He answers, smiles, and hands the phone to Stauskas. Kings head coach Michael Malone and general manager Pete D’Alessandro are on the line, and they tell Stauskas they will pick him. 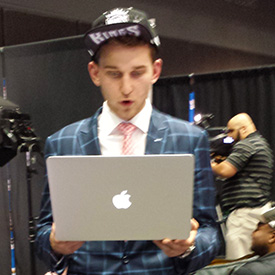 At 8:22, Silver makes it official. Stauskas performs the nifty handshake with his dad, choreographed the night before. “I always throw up the ‘three goggles’ [on the court] so I thought it was only appropriate I did it here,” he would say later. He dons a Kings hat, shakes Silver’s hand, and is shuttled off to a series of more than 20 interviews in the arena’s underbelly. It is difficult to count how many times he is asked some variation of “What does it means to have three Canadian players drafted in the first round?”

Yet Stauskas remains patient and delivers thoughtful, enthusiastic responses. A big-time social media user—he was thrilled about recently receiving the verification check next to his Twitter handle—he saw that Toronto rapper Drake mentioned him in a tweet.

“I was pretty excited about that; that was pretty cool,” he says. “I just need the Justin Bieber shoutout and I’m good. That’s all I’m asking for, man.”

He  is slightly disappointed to learn his preferred jersey number, 11, is retired by Sacramento, but pumped to hear Michigan teammate Mitch McGary was drafted by Oklahoma City with the 21st pick. Later, Glenn Robinson III will be selected by Minnesota, meaning all five starters from the Michigan team that lost in the 2013 national championship have been drafted. Sitting in the green room, Beilein proudly snaps a photo of the draft board. “I don’t tweet very often,” he says, “but I’m going to tweet this.”

Stauskas will fly to Sacramento for the first time in his life the following night. All he ever wanted was to be an NBA player. So what will drive him now?

“My first goal is to find a way to get on the floor and make an impact,” he says. “Down the road my goal is to be an All Star. Throughout my life, every single time I’ve set my mind to accomplish something, I’ve done it. I feel it will be the same thing moving forward. If I give 100 percent of my effort toward being an All Star, then sometime down the road, if everything works out, that could happen. That’s the next thing I’m chasing.”