Out on a limb 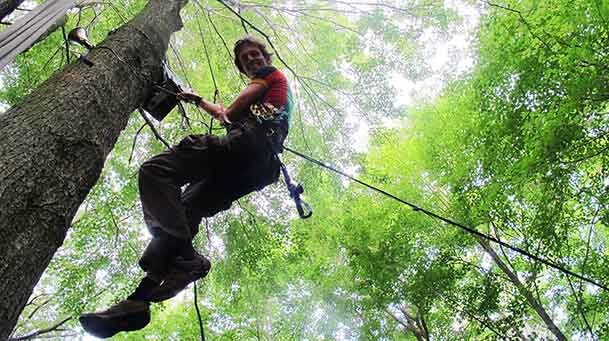 When he’s in Ann Arbor, Christoph Nolte often joins members of the Arbor Solaris performance troupe amid the expansive branches of a massive tree. There he can be found producing “flow art,” more commonly known as a circus.

“What I’ve been really exploring most closely is how we can open up new ways of experiencing trees.” — Christoph Nolte
When he’s in Colombia, South America, Nolte might be seen in the canopy of yet another enormous tree. Here, he may be leading construction of a multi-tiered tree house to accommodate “Earth reflections and spirit journeys, inspiring love for nature and majestic trees.”

Most of the time, though, Nolte is more grounded, literally and figuratively.

He once spent a year visiting 18 UNESCO biosphere reserves in 16 countries, covering almost 7,500 miles by bicycle. His mission? To evaluate whether participation in the program made the sites more likely to achieve sustainable development goals.

His conclusion was consistent with the rest of his research, which is challenging cherished notions about preserving ecosystems: “Whether a reserve was strong or not depended on a multitude of factors, but very little on whether it participated in that [UNESCO] program.”

For the PhD candidate in the School of Natural Resources and the Environment, the common denominator in all these activities is a profound passion for protecting and preserving trees. Nolte hopes his research findings will provide governments and funding agencies better evidence on which to base conservation efforts. And he hopes the circuses and tree houses will expand the pool of people who share his passion.

“I’m very curious about different ways of attracting people to engage more closely with nature, to spend more time in nature, and to have those experiences that I feel are pretty transformational,” Nolte says. “So what I’ve been really exploring most closely is how we can open up new ways of experiencing trees.”

But, of course, the trees have to be there in order to be experienced, and Nolte’s scholarly work to date shows that organizations charged with protecting those trees are struggling to find the most effective ways to do that.

Nolte has published three papers on his dissertation theme: “Why are some protected areas more successful than others?” His analysis is driven by an attempt to quantify the causal impact of each protected area on reducing deforestation and then look at correlations between that causal impact and various management indicators.

“I’m very curious about different ways of attracting people to engage more closely with nature, to spend more time in nature, and to have those experiences that I feel are pretty transformational.” — Nolte
“The question I really managed to answer is: ‘What are the factors associated with success?’” he says, using deforestation as the most objective indicator. “If there’s deforestation in a protected forest, something’s not working.”

“So, for each protected area, we estimated what deforestation pressure it was under,” he says. “In other words, how much would it have been deforested if it wasn’t protected?” That is the new and valuable aspect of Nolte’s analysis, “because we use a rigorous counterfactual approach.”

Using that indicator of deforestation “pressure,” and comparing it with actual deforestation, Nolte and his colleagues could then conclude how much impact the protected area actually had on deforestation. “And that is a causal argument,” he says.

When they compared protected areas according to that impact, they could then distinguish between “less successful” and “more successful” areas, and see how they differed in terms of specific management indicators. “And that was our correlational argument.”

Nolte expected that such management indicators as budget and level of community involvement would correlate closely with the success or failure of preservation efforts.

“But we found the groups did not differ in terms of budget, personnel, equipment, or whether they had a management plan,” he says.

Among the 90 indicators Nolte’s team used, the only difference between the “less successful” and “more successful” groups was whether the land rights to the designated area had been resolved.

That is: Was there an undisputed owner of the property set aside for preservation?

Forest for the trees

“In an ideal world, the government would tackle the land rights before it poured money into protected areas.” — Nolte
Without a clear resolution of land rights, major donors who contribute to biodiversity preservation may be basing funding decisions on erroneous indicators, Nolte says.

“In an ideal world, the government would tackle the land rights before it poured money into protected areas,” he says. “If you don’t look at the land rights, [these other management indicators] won’t tell you much about how effective the protected area is. Those park agencies are staffed with biologists and ecologists and people who know a lot about nature, not necessarily people who know a lot about land rights. This is something that’s really neglected.”

In Colombia, officials in one region are now beginning to prioritize and clarify land-rights issues as they address preservation efforts. It’s a move unrelated to Nolte’s research, but one he finds encouraging.

These days, Nolte is focusing on the economics of ecology. As the first Marshall Weinberg Population, Development, and Climate Change Fellow, he is analyzing Brazilian census data to study the extent to which setting aside land for conservation impacts economic opportunities.

“I feel like a lot of money that is meant to maintain species on this planet gets siphoned off, not necessarily consciously in terms of corruption or evildoing, but in the sense that ‘it’s a job.'” — Nolte
As is often the case, however, the original thesis has branched off into unanticipated territory. Nolte’s focus on the business of ecology has him questioning how much of the disconnect he’s already observed between conservation data and decision-making represents an obstacle that hinders most agents of change: “Who benefits from the status quo?”

“A lot of people make money from the information gap between [those who are administering funds] and what really happens down on the ground in the parks,” Nolte says. “There is a very long chain of intermediaries, and each of them makes a living from being one. I feel like a lot of money that is meant to maintain species on this planet gets siphoned off, not necessarily consciously in terms of corruption or evildoing, but [in the sense that] ‘it’s a job.’

“The frustration right now is my wondering if I’m starting to become a part of that or making a positive difference.”