Will you get sarcopenia?

Samuel Clemens, aka Mark Twain, at about 25 and 70, respectively.

“When I was younger, I could remember anything, whether it had happened or not; but my faculties are decaying now and soon I shall be so I cannot remember any but the things that never happened. It is sad to go to pieces like this but we all have to do it.”― Mark Twain

Mark Twain’s take on aging suggests an inevitable decline of mind and body over time. We all recognize the hallmarks of growing older: Our skin begins to wrinkle and sag. We lose our hair. Our posture is stooped. Our reaction time slows, we’re less coordinated, and we have a tougher time performing simple tasks (both physical and mental). These traits come together for some at an early age, for others later in life.

Like Twain, most of us assume that one day we will “go to pieces.” We’ve seen the signs in our elders and await a similar fate. For years, scientists assumed nothing could be done about the aging process.

Thankfully, none of these classic presentations of age are inevitable, except for the more obvious changes in appearance, hair, and skin. And research increasingly shows that diet and exercise can be powerful tools in combating these other common characteristics of aging, classified as sarcopenia. They include loss of muscle, strength, and balance; changes in gait, posture, and movement; and a loss of brain and nerve function.

The prevalence of clinically significant sarcopenia ranges from 8.8 percent in young-old women (age 60-69) to 17.5 percent in old-old men (>80). Persons who are obese and sarcopenic (the “fat frail”) have worse outcomes than those who are sarcopenic and non-obese. Signs and symptoms of sarcopenia can be observed in individuals as early as age 30.

Sarcopenia has many causes. Some are beyond our control, like disease or environmental conditions. The condition generally attributes to three major factors:

While each of these factors is distinct, they actually combine to produce the age-related loss of muscle size and function. This contributes to a change in coordination and a diminished ability to perform the tasks of daily living that were so easy to execute at a younger age.

Muscle mass is made up of proteins. The human body seeks equilibrium between protein production (synthesis) and usage (metabolism) for energy and cellular structure. Our bodies can produce some nonessential proteins but others, called essential proteins, are obtained from foods we eat. (See “Health Yourself: The Protein Conundrum.”

While the body does not lose the ability to metabolize essential proteins, it does lose the ability to synthesize the nonessential proteins that we manufacture ourselves. Here is where key hormones come into play, specifically insulin-like growth hormone (IGF-1),testosterone,and growth hormone.These play a major role in protein production, synthesis, and use. With sarcopenic aging, their production declines and a perfect storm ensues. Movement, coordination, and balance are impaired.

Specialized supplementation with amino-acid products may be beneficial or necessary in specific elderly or clinical populations. But the most practical means of promoting skeletal muscle protein anabolism for the majority of older adults is to include a moderate serving of protein during each meal. For example, a 20-g serving (about 0.7 oz.) at each meal of most animal or plant-based proteins contains 5-8 g of essential amino acids. This would be more than sufficient to stimulate muscle protein synthesis in most individuals.

A motor unit is responsible for sending signals from the brain to the muscles to initiate movement. Each unit consists of a motor neuron and all the muscle fibers that it connects to and stimulates. Motor unit restructuring refers to the ongoing changes in number and function of spinal cord motor units. This restructuring process occurs throughout life and is considered irreversible.

Human nerve cells have a predetermined lifespan and their decline depends on location, age, presence of disease, and conditions of use. Nerve cells can remain present in aged individuals yet be impaired because of biochemical changes, or simply from disuse.

A muscle that requires precise movements (an eye muscle, for example) will have motor units with a motor neuron innervating a few muscle fibers. Muscles that require less precise movements, (quadriceps, for example) will have a motor neuron that innervates hundreds and possibly thousands of muscle fibers. Often those with sarcopenic-muscle/nerve remodeling can still perform tasks like putting on makeup or shaving. But they can’t rise from a chair without assistance or walk a straight line without weaving. 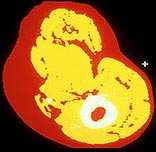 Research indicates that sarcopenia accelerates in individuals who exhibit years of sedentary living. Physically inactive adults will see a faster and greater loss of muscle mass than physically active adults, as well as other co-morbid conditions like cardiovascular disease.

The most pronounced symptoms of sarcopenia include muscle loss, musculoskeletal weakness, and loss of stamina that interferes with physical activity. Progressive loss of muscle mass presents over time; it’s a slow process that rarely is noticed until it reaches a clinical horizon. 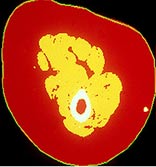 The CT scans on the left illustrate a thigh muscle of a healthy young adult (top), and the same muscle in an older adult (bottom) who has been sedentary most of his life.

The thigh bone is white, the muscle area is yellow, and the fat tissue is red. The older sedentary person exhibits greatly reduced muscle area, indicative of advanced sarcopenia.

Sustained physical activity is the most effective strategy for preventing and treating sarcopenia. Exercise that increases muscle strength and endurance with weights or resistance is essential. Resistance training has been reported to positively influence the neuromuscular system, hormone concentrations, and protein synthesis rate.

For optimal benefits with minimal risk of injury, the proper form, intensity, and frequency of resistance exercise is vital. For that reason, one should work with an experienced certified trainer or physical therapist to develop a customized, long-term exercise plan.

Research shows that a program of progressive resistance training can increase protein synthesis rates in older adults in a very short time.

It is important to remember that sarcopenia is not inevitable. Introducing exercise into your routine is an effective way to stave off its effects. Also, adding a 20-g serving of protein to each meal may prove beneficial.

Start now, before it’s too late!